Millions of people will die in Yemen, in what will be the world's worst famine crisis in decades, unless a Saudi-led military coalition ends a devastating blockade and allows aid into the country, the United Nations has warned.

The Saudi-led alliance fighting Houthi rebels in Yemen tightened its air, land and sea blockade of the country after a ballistic missile was fired on Saturday towards the Saudi capital, Riyadh.

Since then, the country's already inflated food and fuel prices have skyrocketed, while flights delivering much-needed humanitarian aid have been prevented from landing.

After briefing the UN Security Council on Wednesday, Mark Lowcock, the UN's humanitarian chief, said the move will worsen a "catastrophic" humanitarian crisis that has pushed millions to the brink of famine and has caused a mass cholera epidemic.

"I have told the Council that unless those measures are lifted ... there will be a famine in Yemen," Lowcock, who visited Yemen late in October, told reporters on Wednesday.

"It will be the largest famine the world has seen in many decades, with millions of victims."

Despite Lowcock's stark warning, the Security Council, which strongly condemned the firing of the missile by the Houthi rebels, announced no immediate action over the blockade.

Italian Ambassador Sebastiano Cardi, who holds the council's presidency, expressed concern about the "dire humanitarian situation in Yemen" and stressed "the importance of keeping all Yemen's ports and airports functioning," added Cardi.

He said the comments by Lowcock, who visited Yemen late last month, had brought some of the "reality from Yemen to the Security Council, but for now, they've responded with very carefully chosen words rather than any concrete action".

I briefed Member States today on my mission to #Yemen. My statement: https://t.co/ycepe6hC63 pic.twitter.com/h05IC0UAvq

Kristine Beckerle, Yemen researcher at Human Rights Watch, said it was "far past time" the members of the UN Security Council "made it very clear" to Yemen's warring sides that there will be "concrete consequences" in cases of obstruction to humanitarian assistance.

"The Council already has a mechanism for sanctioning people in Yemen who are committing gross violations," she told Al Jazeera.

Beckerle said government officials in countries such as the US, UK and France are typically "issuing broad recitations of concern", without, however, acting upon it.

"It's not enough for the US or the UK to say we are worried about famine in Yemen.

"At this point, it's up to the Security Council members, and particularly those allied with Saudi Arabia, to be using all the leverage at their disposal to be pushing these people to actually make changes to the ways in which they are fighting this war and certainly for them to stop impending access to aid."

Yemen has been devastated by more than two and a half years of war after Houthi rebels, believed to be backed by Iran, captured the capital, Sanaa, and overthrew President Abd-Rabbu Mansour Hadi's government.

A Saudi-led coalition was formed in 2015 to fight the Houthi rebels and army troops allied with them.

According to the UN, the conflict has killed more than 10,000 people and left over seven million in need of food assistance.

Millions of others do not have adequate access to health, water and sanitation services.

The country has also been hit by a cholera outbreak, with some 900,000 suspected cases since April. 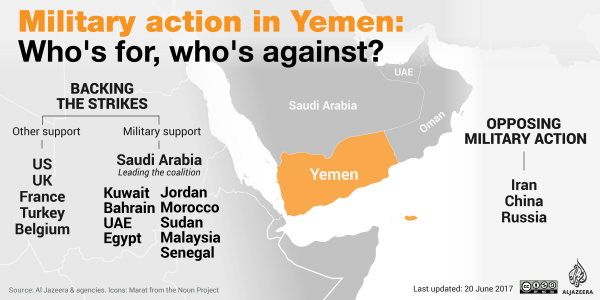 Calling for a five-point action plan, Lowcock on Wednesday urged the Saudi-led coalition to reopen the airspace for humanitarian flights into Yemen and provide assurances that access would not be disrupted again.

He also called for an agreement to allow a World Food Programme ship to anchor off the Yemeni coast, the re-opening of all seaports, to allow food, fuel and medical supplies to enter the country, and a "scaling back of interference" with vessels that have "passed inspection by the UN verification and inspection mechanism".

"In less than a day, this blockade already hiked up fuel prices in some governorates by as much as 60 percent as people scramble to stock up, and led to disruption of public transportation," the groups, including Oxfam, Save the Children and the International Rescue Committee, said in a statement.

"The closure of all sea and land ports means urgently-needed lifesaving medical supplies have ceased, potentially affecting hundreds of thousands of people."

Saudi Arabia said the closure of was aimed at preventing the smuggling of weapons into Yemen and accused its regional rival Iran of providing the missile that was launched by the Houthis on Saturday.

Iran has denied the accusation.

SOURCE.
------------------------
Additional links:
-'Only God can save us':Yemen blockade may cause world's largest famine in decades. (Another recent story on this, at The Guardian)
-Yemen conflict: UN official accuses world of ignoring crisis. (At the BBC)
-One woman's lonely struggle against famine in Yemen. (A previous post to this group by me.)

On Yemen:
-Yemen profile - Timeline. (At the BBC)

Canada arms sales to Saudi Arabia:
-Saudi Arabia top non-U.S. destination for Canadian arms exports: federal report. (At the CBC. OP: Lest we think only the US is doing this...)