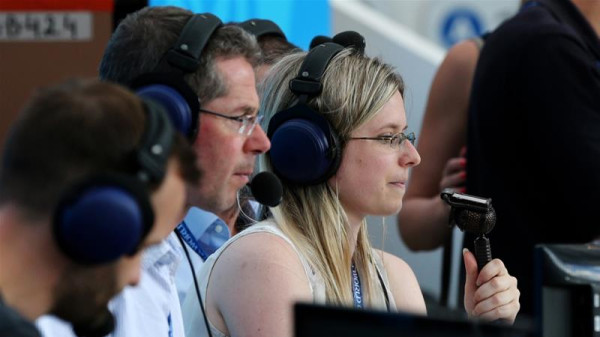 It has been a World Cup of many firsts for women this year but the good has come with bouts of controversy.

British sports journalist Vicki Sparks and German commentator Claudia Neumann made history by becoming the first women from their respective countries to commentate during the tournament.

Elsewhere, thousands of Iranian women entered a sports stadium for the first time since 1979, as they watched their national team take on Spain at a live screening in the capital Tehran.

But as more and more women became part of this year's World Cup coverage, there have been growing concerns over incidents of sexual harassment and sexism during the month-long event.

"The fact is that in most countries football is still seen as the preserve of men," said anti-discriminatory body Fare network.

"From the number of women involved in leadership, the storylines of TV advertising, the constant TV close-ups of attractive women in the crowd, to the number of female toilets inside stadiums, the role of women is passive, often as objects of adornment." 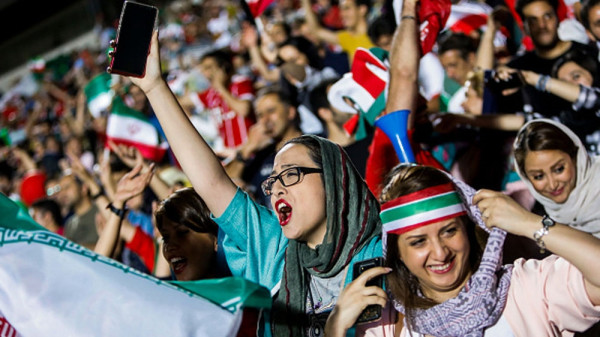 In one incident, Colombian correspondent Julieth Gonzalez Theran was reporting live from Moscow when a man approached her, put one arm around her, grabbed her left breast and kissed her on the cheek before running away.

A DW reporter was sexually harassed while covering the #WorldCup. @JULIETHCGT was kissed, groped by a man while reporting from Moscow.

Sexual harassment is not okay. It needs to stop. In football, and elsewhere.pic.twitter.com/O0S1a1F4Es

Brazilian reporter Julia Guimaraes dodged a kiss by a passer-by while on air from Yekaterinburg.

"This is not polite. This is not right ... never do this to a woman. Respect," she shouted, pointing her microphone at the man, before turning back to face the camera.

Many other female reporters have endured similar treatment on their jobs, sparking concern among rights groups, media watchdogs and journalists.

"Something that might look like fun in sports frivolity is actually problematic behaviour because these are professionals doing their job and they're being harassed and assaulted in some cases," said Courtney Radsch, advocacy director at the Committee to Protect Journalists, a US-based advocacy group.

Spanish football journalist Gemma Soler, who covered the 2014 World Cup in Brazil, said the incidents of harassment do not surprise her.

"It makes me sad but at the same time I feel happy because this kind of misbehaviour, that has existed forever, is receiving more attention from media and a general reprobation from society now," Soler told Al Jazeera.

Videos of female fans being asked to repeat vulgar phrases and words with sexual connotations in a foreign language are also doing the rounds on social media.

In the first few days of the tournament, a group of Brazilian men filmed themselves as they surrounded a Russian woman, urging her to chant about the colour of a woman's genitals in Portuguese.

In another video, a couple of journalists from Paraguay are seen asking a woman to say a phrase related to her vagina in the indigenous Guarani language.

Mariana Linhan, Fare network's media officer, said, "The sexist, offensive nature of the incidents is much wider than football".

"I think its worrying and derogatory and it's clearly a trend that leads to the fact that women still have to fight for their place in football," said Linhan.

"Soccer is known as the beautiful game, and that includes its fans," the subheading read. "Check out photos of some of the sexiest here."

Twitter users were quick to slam Getty Images for the piece, calling it "pretty sexist" and "inappropriate".

"Seriously, get the adults back in charge of your account," one user wrote.

Another said: "The 1970s called and they want their misogyny back."

"@Austynzogs: @Gidi_Traffic Getty Images has deleted a gallery of the 'hottest fans' at the World Cup following criticism on social media #WorldCup pic.twitter.com/ltKZGgFefx

Following the backlash, Getty Images took the piece down and expressed regret, admitting it did not meet its editorial standards.

"There are many interesting stories to tell about the World Cup and we acknowledge this was not one of them," it said.

For the first time on US television, a couple of women - Aly Wagner of Fox Sports and Telemundo's Viviana Vila - are offering analysis during the World Cup.

Fare network listed at least 44 female broadcasters, adding "we know there are many more". But as activists and journalists lauded women's contribution to the tournament coverage, some have been critical.

Jason Cundy, a former Chelsea and Tottenham defender, stirred up controversy for saying that he preferred to "hear a male voice when watching football" and that women commentators are "high-pitched".

Soler said that while she is heartened by the number of women on the screens, more needs to be done to give them important roles.

"It is true that there are more women this year, but some of these women journalists have a mere ornamental function and that doesn't help at all," said Soler.

The Russian division of the US chain promised free burgers to women who get "the best football genes" and "ensure the success of the Russian team for generations to come".

The company later pulled down the promotion, which was announced on its Russian social media platform VK, and apologised for it.

A month before the start of the World Cup, the Argentine Football Association (AFA) sparked outcry when it released a manual with tips on how to seduce Russian women.

The guide, handed to journalists, officials, players and coaches travelling to Russia, during a free training course, included a section entitled: "How to stand a chance with a Russian girl."

It asked the Argentine men to "dress well, look clean and smell nice".

The manual also said that some Russian women would be interested in material things like money and suggested them to "be selective".

The AFA later issued a statement of apology, which said the material was ";erroneously printed".