(CNN)A prominent young journalist was killed during a night of rioting in Londonderry on Thursday, in what police in Northern Ireland have described as a "terrorist incident."

Dissident republicans are believed to be responsible for the death of Lyra McKee, 29, who was shot during violent unrest in the Creggan area of the city, according to police. Images from the scene showed cars alight as a crowd threw fireworks and petrol bombs at emergency vehicles.
The city -- which is referred to by Irish nationalists as Derry and British unionists as Londonderry -- is a short drive from the border with the Republic of Ireland.
McKee was standing close to a police vehicle when she was wounded by a single gunman firing shots into a residential area. She died soon after from her injuries, assistant chief constable Mark Hamilton told reporters Friday. Police do not know if she was working as a journalist at the time, or was in the city for personal reasons. 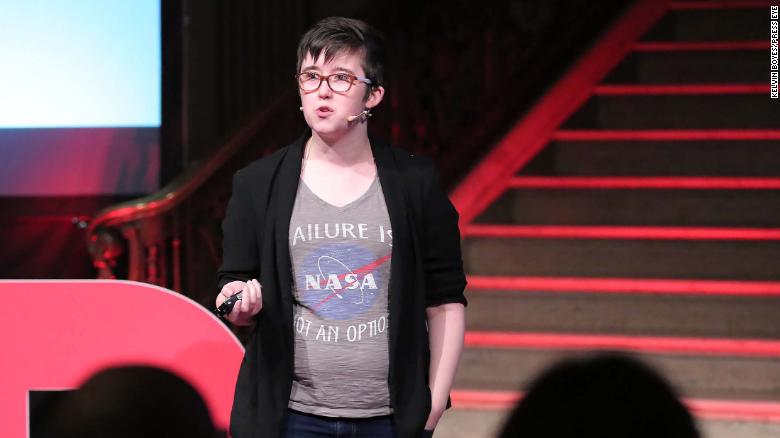 McKee spoke at the TEDxStormont Women 2017 event in November 2017.

During a news conference on Friday, Hamilton described the death of McKee as "horrendous and unjustified" and appealed for calm. Overnight he announced that police were treating the shooting as a "terrorist incident" and had launched a murder inquiry.
McKee, according to literary agents Janklow & Nesbit UK, was born in Belfast, and had written for a number of publications, including The Atlantic and Buzzfeed News.
In 2016, she was named as one of Forbes Magazine's 30 under 30 in media in Europe.
She is the first journalist to be killed in the United Kingdom since 2001, according to nonprofit organization the Committee to Protect Journalists.
Hamilton confirmed that police suspect the shooting was carried out by dissident republicans, namely the New Irish Republican Army (IRA).

Thursday's unrest in Derry comes in advance of Easter weekend, during which republicans mark the anniversary of the 1916 Easter Rising, considered among the most important dates in the struggle for Irish independence.
Hamilton said police had been in the area carrying out searches on "violent dissident republicans" who they believed were storing firearms and explosives for a number of planned attacks.
They were concerned the weapons could have been used over the Easter weekend in the city.
According to Hamilton, a crowd gathered just after 9 p.m. (4 p.m. ET) on Thursday and over 50 petrol bombs were thrown at officers during the "orchestrated violence." Two vehicles were hijacked and set on fire, he said.
"Police didn't use any force last night. All the violence was directed towards us," Hamilton said.
At around 11 p.m. (6 p.m. ET), there were around 100 people in the area, including young people and members of the media. The gunman fired a number of shots, Hamilton said. 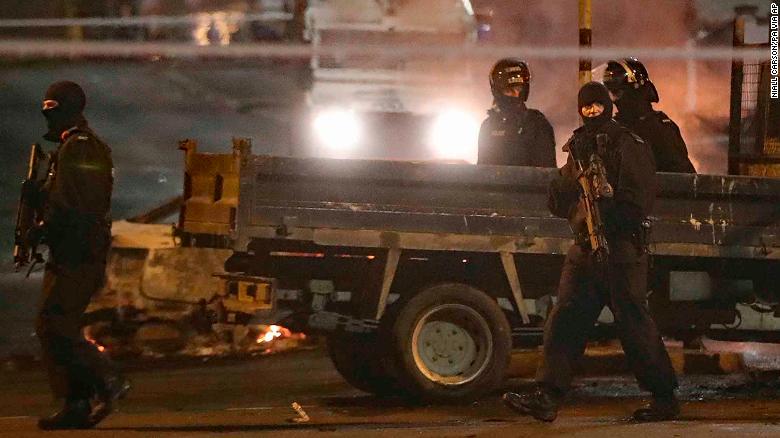 Journalist Leona O'Neill was standing next to McKee as the clock struck 11. She told CNN it was around then that the riot took a more "sinister turn."
O'Neill detailed how a masked gunman emerged from the street corner and fired "indiscriminately up the street towards police vehicles but also towards a group of people who were just watching what was happening in their street."
"The gunman was just pointing the gun around the corner," O'Neill said. "The amount of smoke there -- the fire and flames coming from the police vehicles -- he could not have seen anything of that street."

"Her friend turned around and saw her and they started crying that she had been shot. They were hysterical," O'Neill said.
McKee, who was unconscious, was quickly carried by police into the backseat of a car and rushed to hospital, O'Neill continued.
O'Neill said that the group she was standing with was "a good distance away from where the petrol bottles were being thrown" and "people thought they were safe." She said the mood changed after McKee was shot with bystanders directing their anger towards the rioters and hurling abuse.
"There was a lot of anger on the ground, people were shouting down at the rioters," she added. 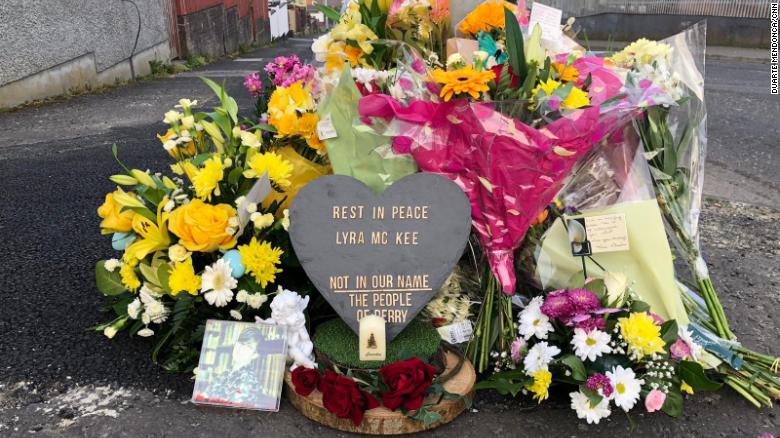 Flowers and tributes are left near the spot where McKee was shot on Thursday night.

A recent spate of violence in Northern Ireland has raised fears that sectarian violence might be revived, amid ongoing concerns over the effects of Brexit.
In January, a car bomb was detonated in Derry in a suspected attack by the New IRA.
Many fear that Britain's departure from the European Union will mean the reintroduction of border posts on the frontier between Northern Ireland, part of the UK, and the Republic of Ireland, a European Union member.
Border infrastructure was often targeted by Irish nationalist paramilitaries during the "Troubles" -- the 40-year sectarian conflict in which more than 3,500 people died.
In a statement on Friday morning, British Prime Minister Theresa May said: "The death of Lyra McKee in last night's suspected terrorist incident in Londonderry is shocking and truly senseless. My deepest condolences go to her family, friends and colleagues. She was a journalist who died doing her job with great courage."


Ireland's Prime Minister, or Taoiseach, Leo Varadkar condemned the killing of McKee "in the strongest possible terms" on Twitter, writing, "We are all full of sadness after last night's events. We cannot allow those who want to propagate violence, fear and hate to drag us back to the past."
Michelle Stanistreet, general secretary of the National Union of Journalists, said in a statement: "The killing of a journalist in these circumstances is deeply shocking. To wake up to this news on Good Friday morning is disturbing and profoundly saddening."
"A bright light has been quenched and that plunges all of us in to darkness," Stanistreet added.


Northern Ireland has two main political parties, the Democratic Unionist Party and Sinn Fein. Sinn Fein's Mary Lou McDonald offered her condolences to McKee's family in a statement, adding, "Her contribution to society stands in marked contrast to those who brutally took her life."
"The murder of Lyra McKee is an attack on all the people of this community, an attack on the peace process and on the Good Friday Agreement," McDonald said. "It is well past time for these groups to go, to end their actions and let the society get on with building a peaceful future."
The Good Friday, or Belfast, Agreement of 1998 was a turning point for the region ending years of bloodletting.
The Democratic Unionist party leader, Arlene Foster, tweeted: "Heartbreaking news. A senseless act. A family has been torn apart. Those who brought guns onto our streets in the 70s, 80s and 90s were wrong. It is equally wrong in 2019. No one wants to go back. My thoughts are also with the brave officers who stood in defense of their community."

The Guardian view on Lyra McKee’s murder: she should have been the future

The murder of the 29-year-old Northern Irish journalist and author Lyra McKee late last night is a tragedy for those who knew her. But her shooting, during rioting in Derry, is of political as well as terrible personal significance. There could hardly be a starker warning that while the Troubles may have officially ended with the Good Friday agreement 21 years ago, the risk of further violence remains.

Ms McKee should have been part of the future. A self-described “ceasefire baby”, too young to have her own memories of the 1970s and 1980s, she brought curiosity and courage to her explorations of Northern Ireland’s history. Having grown up off a stretch of the Antrim Road in north Belfast known as the Murder Mile, she wrote about the sharp rise in suicides that came with peace and argued that trauma was part of her generation’s inheritance. But she was determined to rise above the sectarianism and narrow-mindedness of the past. Her investigation of children who vanished during the Troubles, The Lost Boys, is due to be published next year.

She wrote and spoke powerfully of the impact of the homophobia that was part of her Catholic upbringing. In an open letter to her teenage self, she described pleading with God for help when she realised she was a lesbian, and apologising when she told her mother. But far from turning her back on religion, or avoiding those who were intolerant, she believed in the value of difficult conversations, and urged others to seek out those who disagreed with them. She wanted to change religious teaching about sexuality; to help other young people.

Police blame dissident republicans. When Saoradh, a party representing the New IRA’s thinking, claimed Ms McKee was the accidental victim of a “republican volunteer” seeking to defend the community from “heavily armed crown forces”, the backlash came from across the political spectrum. DUP leader Arlene Foster and Sinn Féin president Mary Lou McDonald appeared together at a vigil while Northern Irish parties issued a highly unusual joint statement condemning the attack on “peace and democratic processes”.

Politicians on both sides of the Irish Sea now have the opportunity to address the broader political context in which grievances have festered, and violence has increased. Since the Stormont assembly collapsed in 2017, Northern Ireland’s political life has been suspended. While the immediate cause was an energy scandal, the crisis has been allowed to widen to the point where it becomes hard to see a way back to the power-sharing arrangement that is the only bridge to a peaceful future.

Blame games between Sinn Féin and the DUP predated Theresa May’s confidence-and-supply arrangement with Ms Foster’s party. But the role of the DUP in propping up her government made a difficult situation worse. Mrs May’s failure to treat the situation with the seriousness it requires throughout the Brexit process has been compounded by ministers’ shocking ignorance and incompetence: former Brexit secretary Dominic Raab’s admission that he hadn’t read the Good Friday agreement; Northern Ireland secretary Karen Bradley’s assertion that killings by the security services were “not crimes”.

Ms McKee’s death has resonated so widely because of her own remarkable qualities. But its timing reinforces the powerful warning it sends. The Good Friday agreement is precious, as the visit to Stormont by a US delegation led by Nancy Pelosi this week reaffirmed. But it could not, by itself, heal Northern Ireland’s divisions. Instead, it offered a way to manage them. That a young life has been cut short should remind politicians on all sides that the agreement cannot be taken for granted, and that if the urgent task is to safeguard it, the ultimate task must be to move beyond it.