Yet more proof that my province is a racist cesspool...

OP: As if the world needed more proof that my province (Quebec) is a racist cesspool...


(OP: Video is at the source, and comes with a strong trigger warning for racism.)
Joyce Echaquan streamed herself from hospital shortly before her death

A video of a dying indigenous woman screaming in distress and being insulted by hospital staff shows the "worst form of racism", says Canadian Prime Minister Justin Trudeau.

Three investigations are under way and a nurse has been fired since the video emerged early this week.

The woman, Joyce Echaquan, streamed her treatment on Facebook shortly before her death in Joliette, Quebec.

There has been a growing outcry since the incident.

It is the latest in a series of events that have raised questions about systemic racism faced by indigenous people in Canada.

In 2015 a report found that racism they faced in the healthcare system contributed to their overall poorer health outcomes, compared to non-indigenous Canadians. 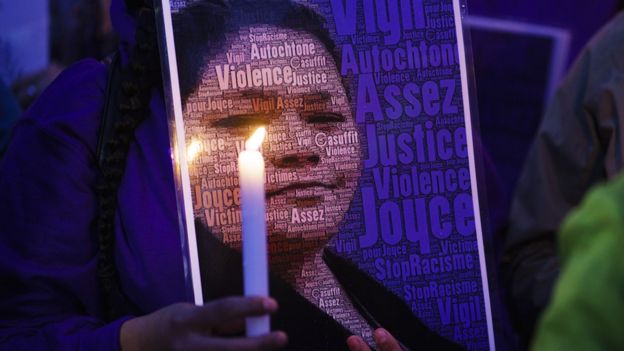 Ms Echaquan, a 37-year-old Atikamekw woman, had gone to the Joliette hospital, about 70km (45 miles) from Montreal, suffering from stomach pains.

The mother of seven filmed herself in her hospital bed screaming and calling for urgent help.

A member of staff can be heard saying to her, in French: "You're stupid as hell." Another says Ms Echaquan had made bad choices in life and asks what her children would think of her behaviour. 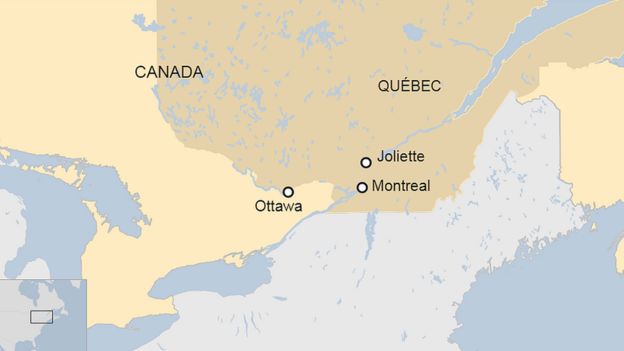 Ms Echaquan died soon afterwards. Her relatives told Radio-Canada that she had a history of heart trouble and was worried that she was being given too much morphine.

What has the reaction been?

"The nurse, what she said, is totally unacceptable, it's racist and she was fired," Quebec Premier François Legault told a news conference this week. "We must fight this racism."

Three current investigations have been launched. Two will be conducted by regional health authorities, one looking into Ms Echaquan's case and another into practices at the hospital.

A forensic pathologist responsible for investigating deaths in suspicious circumstances or due to negligence will also look into her death.

Ghislain Picard, Grand Chief of the Assembly of First Nations Quebec and Labrador, said racism was "very often the fruit of government policies which lead to systemic discrimination".

The premier is expected to meet with Chief Picard on Friday.

In a tweet, Perry Bellegarde, National Chief of the Assembly of First Nations, said the incident showed that discrimination against indigenous people in Canada's healthcare system remained prevalent.

My Statement on the racism and discrimination faced by Joyce Echaquan, a young First Nations mother, who later died in hospital. pic.twitter.com/ZvD6b9c8Hz

A vigil for Ms Echaquan was held outside the Joliette hospital on Tuesday evening and a protest is planned in Montreal at the weekend.

In recent years Canada has been coming to terms with racial injustice suffered by its indigenous people.

Last year a government inquiry found that Canada was complicit in "race-based genocide" against indigenous women.

The report said indigenous women were 12 times more likely to be killed or to disappear than other women in Canada. The inquiry said the cause was deep-rooted colonialism and state inaction.

Quebec published its own report a year ago, following a public inquiry into the relationship between indigenous people and the provincial government services.

The commissioner found that it was "impossible to deny that members of First Nations and Inuit are victims of systemic discrimination in their relations with the public services that are the subject of this inquiry".

In June this year, video showed an indigenous chief, Allan Adam, being repeatedly punched by police as he was arrested in Alberta, sparking outrage across the country.

Also in June, health authorities in the province of British Columbia launched an investigation amid claims that some hospital staff were betting on the blood alcohol level of indigenous patients.

(1) The Coalition Avenir Québec (CAQ) was elected to lead the province in 2018 (i.e., this is the first time they have been in power). Provincial Prime Minister (of Quebec) François Legault is also the leader of the party. This 'government' (OP prefers the term 'regime') have passed laws banning 'visible religious symbols' which have been aimed at minorities. They have also taken steps to drastically reduce the number of immigrants accepted to the province (see also this reference, in French). They have also put in place a 'test of Quebec values' which potential immigrants must pass in order to be accepted in the province.

(2) François Legault, again of the CAQ, has repeatedly denied the existence of systemic racism in Quebec.

(3) In the latest news, Legault refused to meet with the Atikamekw chiefs when leader of the Assembly of First Nations of Quebec and Labrador, Ghislain Picard, wanted them included in the meeting planned between the two men. (OP: Legault denies this, but yeah... I believe Picard.)

(4) The family of Joyce Echaquan are planning legal action.

(5) A (provincial) public inquiry into Quebec's treatment of indigenous people published its findings in 2019. This is discussed in the article posted above. Its recommendations were largely ignored by the Legault government/regime.

(6) Black people in the province also face similar treatment to African Americans in the United States, despite Legault's denial of systemic racism.

(7) Islamophobia is also rampant in Quebec: 3 years after the racist murders of 6 people (8 more were wounded) in a mosque in Quebec city, little had changed for Muslims in the province (reference in French).