People who are fit and healthy are unlikely to have heard of the company Atos. But anyone who has had to apply for sickness benefits may find that the name triggers – according to one MP – a sense of "fear and loathing".

Atos is responsible for carrying out the government's drive to assess everyone claiming incapacity benefit, to decide whether they may actually be well enough to work. Atos staff are testing around 11,000 benefit claimants a week, to determine how ill they really are and whether they are eligible for benefit payments.

Since the last government launched a campaign to cut the number of sickness benefits claimants, the process has been controversial, with charities and politicians warning that vulnerable people have wrongly had vital payments removed.

Questions and answers: taking the test

A Guardian reader agreed to be accompanied to his recent work capability assessment. He has epilepsy and Asperger's syndrome and has been suffering from anxiety. He lost his job last year because of his ill health. 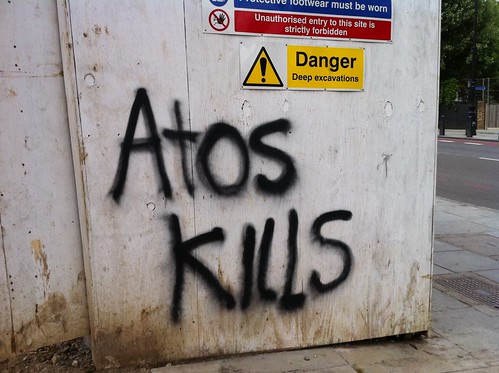 source of the photo

Source
this is also an interesting take on ATOS - "The IT Contractor that thinks it's a doctor".

As you may recall, when the sexual assault case against Dominique Strauss-Kahn began to unravel, reports attributed to a "well-placed law enforcement official" were published in the New York Times. The source claimed that prosecutors no longer considered Nafissatou Diallo a credible witness because, among other concerns, she said in a phone call to an incarcerated friend, "Don't worry, this guy has a lot of money. I know what I'm doing."

The quote was used to paint Diallo as nothing but a sleazy criminal looking to make some money after a consensual encounter with a wealthy man. Now it turns out that's not what she said at all. Oops!

Oh, of course now that it turns out she wasn't out for money, the DA is all mum about everything. Of course!

(DONGGUAN, China) -- A young Chinese couple has sold all three of their children in exchange for money to play online games at Internet cafes, reports a southern Chinese newspaper.

According to Sanxiang City News, the couple met in an Internet cafe back in 2007 and bonded over their obsession with online video games. A year later, the parents -- who are both under 21 -- welcomed their first child, a son. Days after his birth, they left him home alone while they went to play online games at an Internet cafe 30 km away.

In 2009, Li Lin and Li Juan welcomed their second child, a baby girl, and came up with the idea to sell her for money to fund their online game obsession. They did so, receiving RMB 3,000 (less than $500), which they spent entirely shortly after. The couple then proceeded to sell their first child and got 10 times as much for him -- RMB 30,000, or about $4600.

Upon having their third child -- another boy -- the parents followed in their previous footsteps and also got RMB 30,000 for him.

They were finally turned into authorities when Li Lin’s mother found out what her son and his girlfriend had done.

When asked if they missed their children, the parents answered, "We don’t want to raise them, we just want to sell them for some money.”

Sanxiang City News reports the couple didn't know they were breaking the law.

As a gamer and a mother myself, this completely disgusts me. I mean on one hand I hope these kids never have to deal with/meet their parents ever again, on the other hand...for game time? REALLY?!

Some of what she said:

"I am going through a lot. My daughter, we are going through a lot. We are crying everyday. We can't sleep...A lot of things they say about me are not true. My daughter, she goes, 'Mom, please promise me you stop crying. People call you bad names because they don't know you. You have to remember this guy is a powerful man... I told my daughter that I am going to be strong for you and for every other woman in the world...What happened to me, I don't want to happen to any other woman."

The hotel maid who accused ex-IMF boss Dominique Strauss-Kahn of sexually assaulting her made an emotional public appeal on Thursday for people to believe her story as her lawyer threatened a civil lawsuit. In a highly unusual news conference, Nafissatou Diallo told reporters she cannot stop crying and that she wants no other woman to suffer like her — first at the hands of a powerful attacker and then through media muckraking.

When she finished her remarks, her lawyer promised to file a civil lawsuit against her attacker "soon."

[...}Diallo's supporters on Thursday said District Attorney Cyrus Vance had mishandled the matter and should be replaced by a special prosecutor. They suggested race and poverty may be a factor in the prosecution's treatment of the case and said Vance's office leaked numerous false stories about Diallo to the media, making her case harder to win.

A spokeswoman for Vance declined to respond, saying the DA's office does not comment on pending criminal cases.

Her lawyer Kenneth Thompson denied she was trying to shake the rich Frenchman down for cash, saying, "Nafi Diallo did not try to shake down Dominique Strauss-Kahn."

Thompson promised action, saying he and her legal team "will take the civil case to trial because we are going to hold Dominique Strauss-Kahn accountable, whether it be in a criminal courtroom or in a civil lawsuit."

Asked when such a civil suit would be filed, he responded, "I said soon. Soon is soon."

A lot of media outlets are saying that Diallo is breaking her silence to try to pressure the prosecutor to go ahead with the case. IDK if that's true but GOOD FOR HER for being public, vocal and unashamed.

JAKARTA (Reuters) - An Indonesian family stopped a wedding after discovering the groom was a woman, only for an ex-boyfriend to save their blushes by stepping in to marry the bride.

Family and guests gathered to read the Koran at the Islamic ceremony in western Java, but the groom did not bring relatives and suspicions were raised when "Rio" failed to show documents, the Jakarta Globe newspaper reported on Wednesday.

"The suspicion became bigger as her heavy voice suddenly changed into a female one," the newspaper quoted local police chief Krisnandi as saying, adding the groom had a male physique and had known bride Nuraini for seven months.

"The family finally got Kiman, the ex-boyfriend, as the new groom for Nuraini in order to save face in front of their guests," Krisnandi said.

Homosexuality is not illegal in the world's most populous Muslim country, though same-sex marriages are not allowed. Same-sex marriages became legal in New York earlier this month, prompting hundreds of gay and lesbian couples to wed.

I read this a couple of days ago, and I was a little disturbed that there wasn't a direct quote from the bride that showed SHE had been deceived by the female groom. Everything's about the family saving face. Is this article inadvertently promoting a lesbian woman being forced into a hetero marriage?  If anyone knows more about this situation, feel free to comment.
Collapse