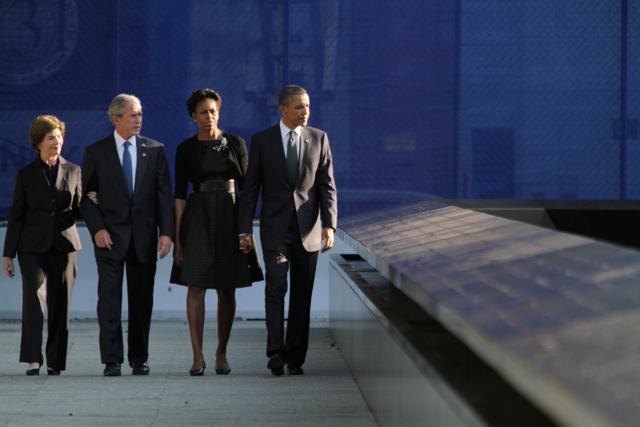 It's been ten years today, _P. Where were you? How do you feel today? Use this post to discuss.

The U.S. Mint has been trying to promote the use of $1 coins, offering free shipping to those who “purchase” large quantities of the more durable, more efficient currency.

Some credit card banks promote the use of their cards by offering frequent flyer bonus miles as a reward. The more you purchase with those cards, the more bonus miles you collect.

If you already see where this is going, then you’re a step ahead of the banks, the airlines and the mint — all of which were caught off-guard when they discovered people were exploiting this legal loophole.

The Mint figured out what was going on when some consumers started ordering large quantities of $1 coins, then depositing them in their local banks which, in turn, returned them to the Mint — still in their original wrapping. Now they’re closing the loophole.

But for a while there, a few canny consumers had taken advantage of this combination of offers to rack up enough miles for free flights all over the world. The process was simple.

Step 2: Deposit the coins in the bank, using that $20,000 to pay off the balance on the credit card before accruing any interest.

Step 3: Repeat steps 1 & 2 until you’ve got enough frequent flyer miles for a first-class ticket to wherever it is you want to go.

National Public Radio’s David Kestenbaum and Robert Benincasa reported on this trick back in July in a report titled “How Frequent Fliers Exploit a Government Program to Get Free Trips.” Mint spokesman Tom Jurkowsky explained that the mint has imposed a limit of 1,000 coins every 10 days in an effort to close the loophole:

I bring this up because right now the same strategy that these “travel hackers” employed to acquire free flights all over the world can be employed by the U.S. government to make desperately needed overdue repairs and upgrades to our aging infrastructure and to end the deadlock crippling our economic recovery due to a lack of overall demand. Uncle Sam has a similar opportunity to use free money to create jobs and to attend to these red-alert repairs while at the same time helping to erase the short-term budget gap created by our current massive unemployment rate and the contraction that followed the Great Recession.( Collapse )

If we have any respect for history or humanity, we should remove 9/11 from our collective consciousness.

I'm talking about the tenth anniversary ceremonies for 9/11, and everything that goes with them: the solemn reading of the names of the dead, the tolling of bells, the honouring of first responders, the gathering of presidents, the dedication of the new memorial, the moments of silence. The works.

Let's just can it all. Shut down Ground Zero. Lock out the tourists. Close "Reflecting Absence", the memorial built in the "footprints" of the former towers with its grove of trees, giant pools, and multiple waterfalls before it can be unveiled this Sunday. Discontinue work on the underground National September 11 Museum due to open in 2012. Tear down the Freedom Tower (redubbed 1 World Trade Center after our "freedom" wars went awry), 102 stories of "the most expensive skyscraper ever constructed in the United States". (Estimated price tag: $3.3bn.) Eliminate that still-being-constructed, hubris-filled 1,776 feet of building, planned in the heyday of George W Bush and soaring into the Manhattan sky like a nyaah-nyaah invitation to future terrorists. Dismantle the other three office towers being built there as part of an $11bn government-sponsored construction programme. Let's get rid of it all. If we had wanted a memorial to 9/11, it would have been more appropriate to leave one of the giant shards of broken tower there untouched.

Ask yourself this: ten years into the post-9/11 era, haven't we had enough of ourselves? If we have any respect for history or humanity or decency left, isn't it time to rip the Band-Aid off the wound, to remove 9/11 from our collective consciousness? No more invocations of those attacks to explain otherwise inexplicable wars in Iraq and Afghanistan and our oh-so-global war on terror. No more invocations of 9/11 to keep the Pentagon and the national security state flooded with money. No more invocations of 9/11 to justify every encroachment on liberty, every new step in the surveillance of Americans, every advance in pat-downs and wand-downs and strip downs that keeps fear high and the homeland security state afloat.

I can't EVEN.  This guy's head is so far up his ass and I bet it's because he didn't lose someone important to him that day.  He can't even keep his shit straight: families and friends of 9/11 victims deserve a memorial but "we" don't?  Who the hell is he to decide who "we" are?  I agree that 9/11 has been exploited by politicians and business opportunists but fuck him for saying we should just let it go because of the actions of a minor group of assholes.

Kelley Williams-Bolar, the Ohio single mother of two who was convicted of a felony for using her father’s address instead of her own in order to get her children into what she felt would be a safer school district, has been granted clemency by Gov. John Kasich. Williams-Bolar had originally been sentenced to 10 days in jail and three years probation for falsifying information.

The news comes after several months of growing public support for Williams-Bolar and a viral Change.org campaign, in which close to 185,000 people emailed Kasich’s office asking him to intervene on Williams-Bolar’s behalf.

At the time of her conviction, Williams-Bolar had no previous criminal history and had nearly earned a teaching license. In Ohio, however, convicted felons are not permitted to teach. So in addition to jail time, a large fine and years of probation, the conviction deprived Williams-Bolar and her family of the economic security she had worked so hard to earn. Thankfully, Gov. Kasich reduced the convictions to two misdemeanors, which means she’ll have a much better chance of keeping her current job as a teacher’s aide and continue her path toward becoming a teacher.

The governor’s clemency decision went against the unanimous recommendation of the Ohio Parole Board, which said last week that the conviction should remain in place. (Wow, assholes!) Considering the volume of email in support of Williams-Boler that Kasich received, it seems likely that the power of grassroots online activism played a key role in helping the governor make the right decision.

As the 10th anniversary of the worst terrorist attack on American soil approaches, an Oklahoma state legislator has ignited a furor in the gay community by saying while on her book tour that homosexuality is a bigger threat to America than terrorism.

State Rep. Sally Kern wrote her book, “The Stoning of Sally Kern: The Liberal Attack on Christian Conservatism and Why We Must Take a Stand,” in response to an uproar she unleashed in 2008 when she was recorded leveling a similar attack against gays.

In that recording, Kern expressed her fear that school children were being indoctrinated to accept a gay lifestyle, that “studies show that no society that has totally embraced homosexuality has lasted more than a few decades,” and that gays were more of a threat to the country than terrorists.

Kern, the wife of a Baptist minister, was speaking about her book in late August with Peter LaBarbera, president of Americans For Truth about Homosexuality, when she again brought up the gay-terrorist comparison.

“You know,” she told LaBarbera, “if you just look at it in practical terms, which has destroyed and ended the life of more people? Terrorism attack here in America or HIV/AIDS? In the last 20 years, 15 to 20 years, we’ve had maybe three terrorist attacks on our soil with a little over 5,000 people regrettably losing their lives. In the same time frame, there have been hundreds of thousands who have died because of having AIDS. So which one’s the biggest threat?”

There are also a couple videos at this source, one with a phone call between her and Ellen Degeneres

Another article has a more complete quote by her, with this added on:
"And you know, every day our young people…they’re bombarded with ‘homosexuality is normal and natural.’ It’s something they have to deal with every day. Fortunately we don’t have to deal with a terrorist attack every day, and that’s what I mean. It’s more dangerous, and yes I think that it’s also more dangerous because it will tear down the moral fiber of this nation.”

She has also said in the past that black people go to prison because they don't study in school and that women don't want to work as hard as men, because they want more time at home for family.

The ruling against Phones 4u was made by the advertising watchdog, the Advertising Standards Authority (ASA).

The company, which brought out the advert just before Easter, showed Jesus with the Sacred Heart on his chest and the slogan "Miraculous deals on Samsung Galaxy Android phones".

The ASA said, while it realised the publicity was intended to be funny, its depiction of Jesus during the religious holiday "gave the impression that they were mocking and belittling core Christian beliefs".

The newspaper advert was for Samsung Galaxy phones

"We therefore concluded that the ads were disrespectful to the Christian faith and were likely to cause serious offence, particularly to Christians," the watchdog said.

A total of 98 people complained and Phones 4u admitted, with the benefit of hindsight, they "understood and regretted" that offence had been caused.

The adverts were withdrawn and the company sent individual apologies to those who complained.

Hide your DVD of "Life of Brian". :P
Collapse