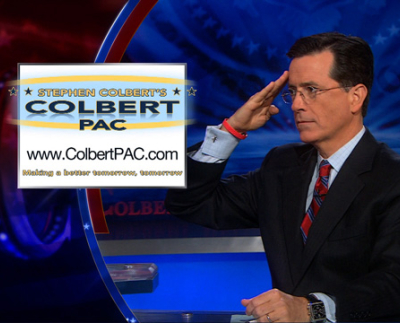 Later today, Stephen Colbert will host a rally with Herman Cain in South Carolina. It’s part of his increasingly complicated involvement in his home state’s GOP primary. Colbert wants voters to back Cain as a way of supporting Colbert’s run for “president of the United States of South Carolina.” Write-in candidates aren’t allowed, hence the partnership with the one-time GOP front-runner, who qualified for the ballot before dropping out of the race amid controversy.

Who’s kidding who? Is the joke on Cain? On South Carolina voters? Or is Colbert not joking at all? His super PAC, Americans for a Better Tomorow, Tomorrow — technically now in the capable hands of his colleague Jon Stewart — has run a number of joke ads on TV. (One involves a lengthy attack on Colbert himself: “America is in crisis, and Stephen Colbert is turning our election into a circus. … Why is the ‘t” in his name silent? What else is he silent about? Letting murderers out of jail?”) But Colbert and Stewart also spent a significant segment of Tuesday night’s “Daily Show” explaining the dos and don’ts of super PAC coordination — a satirical cover for discussion of an undeniably serious subject.

Just what is the comedian — or is he a civic activist — up to? Russell Peterson, author of “Strange Bedfellows: How Late-Night Comedy Turns Democracy Into a Joke,” provided some insight into the evolving Colbert phenomenon.

Private clinics that charge for pregnancy services including abortions will be able to advertise on television and radio under new rules.

The Broadcast Committee of Advertising Practice (BCAP) said there was no justification to bar clinics offering post-conception advice services (PCAS).

Source at the BBC.

In the small hilly Indian state of Meghalaya, a matrilineal system operates with property names and wealth passing from mother to daughter rather than father to son - but some men are campaigning for change.

When early European settlers first arrived here they nicknamed it "the Scotland of the East" on account of its evocative rolling hills.

Coincidentally, today the bustling market in the state capital, Shillong, is awash with tartan in the form of the traditional handloom shawls worn ubiquitously since the autumn chill arrived.

Not far from here the village of Cherrapunji once measured an astonishing 26.5m (87ft) of rain in one year, a fact still acknowledged by the Guinness book as a world record.

But the rainy season is over for the time being and it is Meghalaya's other major claim to fame that I am here to investigate.

It appears that some age-old traditions have been ruffling a few feathers of late, causing the views of a small band of male suffragettes to gain in popularity, reviving some rather outspoken opinions originally started by a small group of intellectuals in the 1960s.

Apologies for not bolding the main article, but it's all really interesting stuff. Now bolded for your reading convenience. :)

WASHINGTON -- President Barack Obama's decision Wednesday to deny a permit for the Keystone XL pipeline gave environmental advocates the rarest of sensations: the feeling of victory.

After being left dejected when the administration scrapped smog regulations, dusted off nuclear power, and allowed expanded drilling in the Gulf of Mexico, Wednesday's Keystone decision allowed green groups to exult.

"I think this is the high water mark of the president's relationship with the environmental community," environmentalist Bill McKibben, a leader against the pipeline, said Wednesday evening. "The knock on the guy was that he was too conciliatory, and in this case, he stood down a bold political threat."

Obama, in affirming his State Department's recommendation to reject the pipeline, emphasized his decision does not preclude applications for similar projects. Cynics speculate the president will approve a minimally altered version of the pipeline after November's election. For now, though, McKibben said environmentalists are feeling optimistic.

Just gotta say, "YAAAAAAAAAAAAAY!" for now. The President's receiving a lot of smack about this from the GOP. Any other tags welcome. Anyway, thoughts?

Former Penn State football coach Joe Paterno has died. The college-football legend was 85 years old when he succumbed in his battle with lung cancer.

Paterno's diagnosis was revealed in mid November, shortly after he was dismissed from his duties as coach of the Nittany Lions. Paterno's ouster came in the aftermath of the arrest of Jerry Sandusky, a longtime Paterno lieutenant facing more than 50 counts of sexual abuse against children. Amid evidence that Paterno had been notified of the abuse but had done little beyond his legal obligation to prevent it, the Penn State board of trustees voted to dismiss the longtime coach in November. The scandal reverberated beyond college football, and sullied a reputation that had once seemed unimpeachable — particularly in central Pennsylvania, where Paterno, or "JoePa," was revered.

During his 46 seasons coaching Penn State, Paterno racked up 409 wins -- the the record for a Division I football coach. He guided his teams to national championships in 1982 and 1986.

The Brooklyn native is survived by his wife, Sue, and their five children.


ETA: Reports are now coming out saying that he's NOT dead...

CBS Sports was the first news source to report it here

This is me waiting to see what CBS Sports says in response tbh:

But in 1967, the U.S. Supreme Court considered the case of Richard Perry Loving, who was white, and his wife, Mildred Loving, of African American and Native American descent.

The case changed history - and was captured on film by LIFE photographer Grey Villet, whose black-and-white photographs are now set to go on display at the International Center of Photography.

Twenty images show the tenderness and family support enjoyed by Mildred and Richard and their three children, Peggy, Sidney and Donald.

Content: The Loving's children Peggy, Sidney and Donald play in King and Queen County, Virginia in April 1965
( Collapse )
I saw this story in a couple of places... consider this your Saturday night pick-me-up because ilu.

And some of the comments are not to be missed: "My African-American wife and I got married just 2 years after the Lovings, 1960, and they have always been our heroes. We were in Southern California so we didn't experience the prejudice or arrest that the Lovings did. We often did not know if we would get served when we went into a restaurant and if we did we would get stares from the other patrons... today we don't get a second glance Things have changed. We celebrate our 52nd wedding anniversary in May."

Members of Occupy Charleston "glitter-bombed" Rick Santorum at the tail end of his speech here at the Citadel tonight.

The occupiers, mostly College of Charleston students, shouted "Occupy!" and threw green glitter in the direction of the podium. One of the students told BuzzFeed afterwards that "I got him in the face!"

quiz time: who barked out a laugh after seeing this that was so loud that it startled the dog?

(hint: it was me)
Collapse