MaddowBlog on MSNBC: A long time ago, in a galaxy far far, a gay...

Apparently the whole Religious Right versus same sex-romance-in-Star Wars-video-games dogfight isn't over yet.

Quick rewind: Recently, BioWare, the makers of the massively popular MMO video game Star Wars: The Old Republic, decided that one of your role playing options should be a same sex romance. Diverse, the universe is, hm?

Newsarama via Yahoo! News has the report: Same Sex Romance Comes to a Galaxy Far, Far Away.

Right on cue, the usual right-wing watchdogs got their midi-chlorians in a bunch and, just like here on Earth, they are trying to eliminate these rebel alliances.

President Obama decides to nominate a South Korean-born educator and health expert to lead the World Bank, rather than someone with experience in global finance or diplomacy.

WASHINGTON — Passing over better-known candidates, President Barack Obama on Friday nominated global health expert and Dartmouth College President Jim Yong Kim to lead the World Bank. It was a surprise pick aimed in part at fending off challenges from developing nations eager to end the U.S. monopoly of the top job at the international institution.

Obama's appointment all but guarantees that Kim, a 52-year-old physician and pioneer in treating HIV/AIDS and tuberculosis in the developing world, will take over at the helm of the World Bank. Though he was born in South Korea, he will extend a tradition of American presidents dating back to the organization's founding in 1944.

The 187-nation World Bank focuses on fighting poverty and promoting development. It is a leading source of development loans for countries seeking financing to build dams, roads and other infrastructure projects.

Several developing nations had sought to break the U.S. leadership streak when current Bank President Robert Zoellick announced he would step down at the end of June. That put Obama in the delicate position of balancing his desire to see emerging economies step forward on the world stage and the pressures of an election year. His support for a non-U.S. candidate could have provoked fresh criticism from Republicans, who frequently question whether Obama believes in the notion of "American exceptionalism." 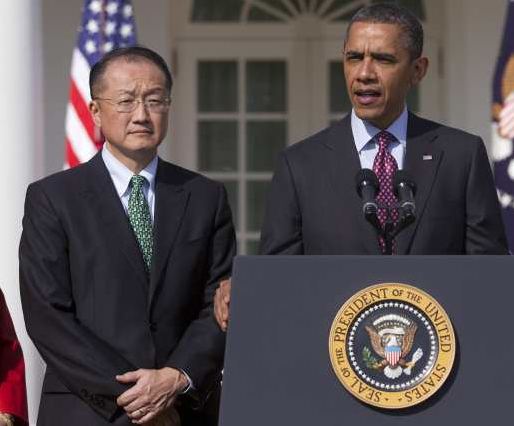 As Obama announced Kim's nomination from the White House Rose Garden on Friday morning, he tried to make the case that an American with a unique background and broad international experience would be a committed representative of the developing world's interests.

"Jim has truly global experience. He has worked from Asia to Africa to the Americas, from capitals to small villages," Obama said. "His personal story exemplifies the great diversity of our country."
( Collapse )

In Wisconsin, a state senator has introduced a bill aimed at penalizing single mothers by calling their unmarried status a contributing factor in child abuse and neglect.

Senate Bill 507, introduced by Republican Senator Glenn Grothman, moves to amend existing state law by "requiring the Child Abuse and Neglect Prevention Board to emphasize nonmarital parenthood as a contributing factor to child abuse and neglect."

The bill would require educational and public awareness campaigns held by the board to emphasize that not being married is abusive and neglectful of children, and to underscore "the role of fathers in the primary prevention of child abuse and neglect."

I just can't even... I was raised by a single mother because my father was a useless piece of shit who cheated on her before she even found out she was pregnant with me (and they were teenagers). If either of my parents could be said to be abusive, I would say it's my dad, NOT my mother.

WASHINGTON (AP) — Former Vice President Dick Cheney had a heart transplant Saturday and is recovering at a Virginia hospital, his office said.

An aide to Cheney disclosed that the 71-year-old, who has had a long history of cardiovascular trouble including numerous heart attacks, had been waiting for a transplant for more than 20 months.

"Although the former vice president and his family do not know the identity of the donor, they will be forever grateful for this lifesaving gift," aide Kara Ahern said in a written statement that was authenticated by several of the Republican politician's close associates.
Cheney was recovering Saturday night at the Intensive Care Unit of Inova Fairfax Hospital in Falls Church, Va., after surgery earlier in the day.

The former vice president suffered a heart attack in 2010, his fifth since the age of 37. That year, he had surgery to have a small pump installed to help his heart keep working. It was one of the few steps left, short of a transplant, to stay alive in the face of what he acknowledged was "increasing congestive heart failure."

The pump, called a left ventricular assist device, is mainly used for short periods to buy time for potential transplant candidates awaiting a donor organ. The fact that doctors resorted to it illustrated the perilous condition he was in.

In July 2007, he had had a minor surgical procedure to replace a device that monitored his heartbeat. Nearly 20 years earlier, in 1988, Cheney had had quadruple bypass surgery, and had two artery-clearing angioplasties and the operation to implant the device.

In 2005, Cheney had six hours of surgery on his legs to repair a kind of aneurysm, and in March 2007, doctors discovered deep venous thrombosis in his left lower leg. An ultrasound a month later showed the clot was getting smaller.

In January 2011, Cheney said he was getting by on a battery-powered heart pump, which made it "awkward to walk around." He also said he hasn't made a decision yet on a transplant, but that "the technology is getting better and better."

Cheney said then that he'd "have to make a decision at some point whether I want to go for a transplant."

Cheney served as former President George W. Bush's vice president for eight years, from 2001 until 2009. Cheney was a lightning rod for criticism during Bush's presidency, accused by opponents of often advocating a belligerent U.S. stance in world affairs during wars in Iraq and Afghanistan.

I'm happy for his family, I guess? I'm having trouble expressing any sort of positive sentiment toward this man.
In Washington, even the dogs are pundits.

My dog, a 2-year-old golden retriever/poodle mix named Z.Z., had her cable news debut this week, on MS­NBC’s “The Last Word.” Host Lawrence O’Donnell had us on to discuss Z.Z.’s membership in Dogs Against Romney.

I kind of feel offended for the dog?

Vancouver’s Jenna Talackova was everything Miss Universe Canada was looking for when she was selected among 65 finalists for the 2012 competition, to be held in Toronto in May.

But the Donald Trump–owned beauty pageant confirmed Friday that the 23-year-old has been disqualified from the competition.

The reason, Talackova claims, is she was born male.

eta: cut fixed, I have no idea whaat happened. I went to bed shortly after posting this to the queue
Collapse