Bryan Fischer: How Is Romney ‘Going To Stand Up To North Korea If He Can Be Pushed Around By A Yokel Like Me?’

But today, Fischer himself backtracked a bit. On his radio, the far-right activist noted what many liberals have, asking, why should voters trust Romney to confront Russia or North Korea if he can’t even stand up to a “yokel” talk show host? Right Wing Watch flagged the clip:

Thousands of Japanese marched to celebrate the last of this nation's 50 nuclear reactors switching off Saturday, shaking banners shaped as giant fish that have become a potent anti-nuclear symbol.

Japan will be without electricity from nuclear power for the first time in four decades when one of three reactors at Tomari nuclear plant in the northern island of Hokkaido goes offline for routine maintenance checks.

After last year's March 11 quake and tsunami set off meltdowns at Fukushima Dai-ichi plant, no reactor stopped for checkups has restarted amid growing public worries about the safety of nuclear technology.

"Today is a historical day," shouted Masashi Ishikawa to a crowd gathered at a Tokyo park, some holding traditional "Koinobori" carp-shaped banners for Children's Day that have grown into a symbol of the anti-nuclear movement.

"There are so many nuclear plants, but not a single one will be up and running today, and that's because of our efforts," Ishikawa said.
The activists said that it was fitting that the day Japan will stop using nuclear power coincided with the nation's annual Children's Day, because of their concerns about protecting children from radiation, which Fukushima Dai-ichi is still spewing into the air and water.

The government has been eager to restart nuclear reactors, warning about blackouts and rising emissions as Japan is forced to turn to oil and gas for energy.

The response from people living near the nuclear plants has been mixed, with some wanting them back in operation because of jobs, subsidies and other benefits to the local economy.

Major protests, like the one Saturday, have been generally limited to urban areas like Tokyo, which had gotten electricity from faraway nuclear plants, including Fukushima Dai-ichi.

Before the nuclear crisis, Japan relied on nuclear power for a third of its electricity needs.

The crowd at the anti-nuclear rally, estimated at 5,500 by organizers, shrugged off government warnings about a power shortage. If anything, they said, with all the reactors going offline one by one, it was clear the nation didn't really need nuclear power.

Whether Japan will suffer a sharp power crunch is still unclear.

Electricity shortage is expected only at peak periods, such as the middle of the day in hot weather, and critics of nuclear power say the proponents are exaggerating the consequences to win public approval to restart reactors.

Hokkaido Electric Power Co. spokesman Kohei Ofusa said Saturday's shutdown was going ahead as planned. Power generation is gradually being turned down from 5 p.m. local time, with all operation ending at 11 p.m., he said.

Yoko Kataoka, a retired baker and grandmother, who was dancing to the music at the rally waving a small paper Koinobori, said she was happy the reactors were going off.

"Let's leave an earth where our children and grandchildren can all play without worries," she said, wearing a shirt that had, "No thank you, nukes," handwritten in the back.

Boris Johnson has won a second term as London mayor, beating Labour rival Ken Livingstone by 3%, after a far closer contest than expected.

Mr Johnson won on second preference votes after failing to gain more than 50% in the first round.

He bucked the national trend after heavy Tory losses elsewhere.

“His message, tone, strategy and agenda was wrong. This should not have been close” tweeted one Blairite critic of Ken Livingstone as it became clear he had lost. “It's not a victory for the Tories, it’s a victory for The Evening Standard and their relentless anti-Ken propaganda” tweeted one of Livingstone’s supporters, whilst Ken lashed out at “media bias” during his concession speech.

In reality both analyses contain some truth but fundamentally miss the mark. It is true that the coverage of this campaign, especially from the Evening Standard was unremittingly hard on Ken and easy going on Boris. As the results came in last night, even one of Boris’s biggest supporters told me privately how surprised they’d been at the sheer scale of fawning the paper has done over Johnson in the past few weeks.

But after four decades in politics, Ken should not be surprised at being attacked by newspapers. At every election he has stood in, the right-wing press has attacked him and at most of those elections, Ken has won. That he failed to do so this time is not because of what he describes as the “smears” against him, but because he was simply no longer able to overcome them.

Similarly the Blairite’s claim that Ken’s agenda had turned off voter’s does not stand up to much scrutiny. In all the polling that was done, Ken’s policies of lower fares and his measures to reduce the cost of living, were overwhelmingly supported by the public, with Johnson’s main policy of small cuts to council tax barely registering.

The problem was not Ken's agenda, but the fact that it was Ken calling for that agenda.
( Collapse )

THE Lib Dems were left red-faced after one of their candidates received less votes than a man dressed as a penguin.

Lib Dem leader Jenny Dawe said: "It would have been nicer not to have been beaten by professor whatever-his-name-was but at the end of the day that wasn't on our list of likely ones we would do well on, so no surprises there."

"Pongoo" Ferrigan said he was "utterly ecstatic" to have beaten the Lib Dems in Pentland Hills.

He said: "I think they're finished. The Lib Dems should get more active in communities if they want to get more votes.

"Because of the situation, sadly, in national politics down south and Nick Clegg's compromises, they will have to look at this and learn a lesson."

The three seats in Pentland Hills were shared by Labour, SNP and Conservatives.

Source
The blame game is under way following the Conservative Party rout that occurred in yesterday’s local elections, and its support of “gay marriage” (i.e. marriage equality) is being used as a scapegoat. Gerald Howarth, MP for Aldershot and Parliamentary Under Secretary of State (Ministry of Defence), told the BBC, “There are issues, for example, like the proposals for gay marriage. A lot of Conservatives have written to me saying ‘I am a lifelong Conservative, there is no mandate for this, why is this being proceeded with?’.” It is a cynically narrow definition of the democracy that a party should only serve the interests of its core members. A political party should lead, not follow. Nevertheless the MP for Peterborough, Stewart Jackson, called on the Prime Minister to drop “barmy lib Dem policies” like gay marriage because they offend traditional party members.

The Conservative vote was split in this election by the right-wing alternative, the UKIP, which accused David Cameron of “deliberately provoking a conflict with people of faith, and risking turning their beliefs into criminal ‘hate offences’,” and whose National Executive “confirmed that while UKIP fully supports the concept of civil partnerships, it opposes the move to legislate for same-sex marriage”. The MP for Devon South West, Gary Streeter, has been a vocal opponent of marriage equality, which he calls “gay marriage”, and he is a supporter of the Coalition for Marriage, as outlined in the article ‘Pro ‘gay cure’ charity infiltrates government’. He is calling for the Conservatives to take a right turn, and is using the increased UKIP to support this. “If the tail has been wagging the dog a little bit too much, we have got to be a little more small “c” and big “C” conservative on crime, law and order, some of our traditional policies. That’s what our supporters are waiting, indeed gagging, to see.”

The Conservatives lost 403 seats and 12 Councils in the election. Its coalition partners, the Liberal Democrats, lost 329 seats and 1 Council. What this says about the future of British politics is hard to gauge when only 32% of the electorate voted. The problem is that it is being used by opponents of equal marriage within the government to derail policies that were already on uncertain ground. And that government is still in power. 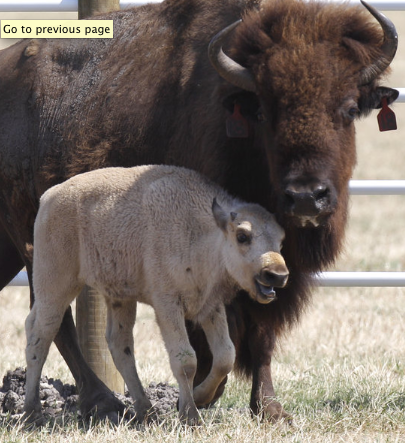 Texas Rangers and the Hunt County Sheriff's Department are investigating the deaths this week of a rare white buffalo calf, considered sacred by its Lakota Sioux owner, and its mother.

The buffalo's mother, named Buffalo Woman, was also found dead the next day on the ranch near Greenville, Texas. Greenville is about 75 miles east of Fort Worth, Texas.

The calf's father, Ben, was killed April 3 when he was struck by lightning during the storms that spawned several tornadoes in the Dallas area.
( Collapse )
The publication of an article about a gay student in the yearbook of Lenoir City High School has provoked outrage, after one of the board members of the school wrote a blog-post asking for the journalism teacher to be sacked, and for a police investigation into the matter.

The article in question is about a student Zac Mitchell, who is openly gay, and where he describes his coming out, his family reactions, a cross-dressing experience, and donation to gay-rights organisations. A high-resolution picture of this piece, with the full text of the article, can be accessed by clicking this link.

The article was written by a female student who remains anonymous, and included for publication by James Yoakley, who teaches journalism at the school based in Tennessee, just outside of Knoxville.

However, one school board member, Van Shaver, immediately denounced the move in very strong terms on his blog, in a post titled “It’s not OK.” He called the publication of the article “despicable,” and called for an investigation by both school administrators and law enforcement into the matter. It is unclear what law, if any, the article is meant to have broken. ( Collapse )

source had fucking had enough of straight people and their bullshit.

The stage along the sea was a politically crafted advertisement for Egypt's diversity: An unveiled woman chatted with a bearded Islamist and a retired soccer star shared the spotlight with a young hero from last year's revolution.

A roar erupted from a crowd, mostly students, when a white-haired man in a linen blazer raised his arms. As fireworks flashed in the night sky, Abdel Moneim Aboul Fotouh called for national unity to end military rule and unrest that have soured the euphoria since Hosni Mubarak was forced from power.