A LANDMARK court decision to declare two men the parents of baby born through surrogacy is a "gross abuse" of the child's rights, a Christian lobby group says.

Managing director of the Australian Christian Lobby (ACL) Jim Wallace also likened children in such situations to members of the stolen generation.

A NSW Supreme Court judgement handed down last month found it was in the child's best interests to have both Sydney men as parents, after the birth mother agreed to give up recognition on the birth certificate.

I mostly just want to know how much money I have to pay to punch Jim Wallace and other members of the ALC in the face repeatedly.

source
Ever since the public relations blunders at the time of Princess Diana’s death, the Queen has gone to great lengths to be more in touch with the mood of country. She presents the monarchy as modern, compassionate and inclusive; often referring to the value of a diverse multicultural, multifaith society.

On one issue, however, she remains curiously out of step with public opinion. Whereas most of us now welcome and embrace lesbian, gay, bisexual and transgender (LGBT) people, the Queen has never done so.

While I doubt that Elizabeth II is a raging homophobe, she certainly doesn’t appear to be gay-friendly. Not once in her 60-year reign has she publicly acknowledged the existence of the LGBT community – or gay members of her own royal family. The Queen has turned her back on queens.

While she has spoken approvingly of the UK’s many races and faiths, for six decades she has ignored LGBT Britons. Judging from her silence, it seems that we are the unspeakable ones – the people she cannot bear to acknowledge or mention in public. If she treated black and Asian Britons in the same way, she’d be denounced as a racist. Why the double standards?

Regardless of whether these omissions are a reflection of the Queen’s personal views or the result of advice from her courtiers, as monarch she bears ultimate responsibility. Her silence sends a signal of exclusion and disrespect.

The National Review’s Jonah Goldberg is claiming that 18-year-olds should be denied the right to vote because they are “so frickin’ stupid about so many things.” In a video first posted by the Daily Caller, Goldberg laments the culture’s obsession with youth and argues that conservatives should “beat out” young people’s belief that “socialism is better than capitalism.” Goldberg is the third National Review writer in two months to face controversy:

GOLDBERG: Personally, I think the voting age should be much, higher, not lower. I think it was a mistake to lower it to 18, to be brutally honest….[I]t is a simple fact of science that nothing correlates more with ignorance and stupidity than youth. We’re all born idiots, and we only get over that condition as we get less young. And yet there’s this thing in this culture where, ‘Oh, young people are for it so it must be special.’ No, the reason young people are for it because they don’t know better. That’s why we call them young people.

The fact that young people think socialism is better than capitalism. That’s proof of what social scientists call their stupidity and their ignorance. And that’s something that conservatives have to beat out of them. Either literally or figuratively as far as I’m concerned.

The magazine fired popular conservative columnist John Derbyshire in April after he topped off a long history of racism and sexism by advising children to avoid “concentrations of black.” It later ended its relationship with Robert Weissberg, who had ties to the white nationalist group American Renaissance.

Video of the douchebaggery at the link.
source: http://thinkprogress.org/politics/2012/06/01/493804/national-review-writer-conservatives-should-beat-young-people-who-think-socialism-is-better-than-capitalism/

SPRINGFIELD, Ill. — Screaming, swearing and referencing the Bible, a red-faced Illinois Rep. Mike Bost punched at papers he threw in the air while lambasting the state's powerful House speaker. Then he swiped his microphone away and flopped back in his chair in a silent sulk.

The Republican's videotaped tirade is creating an online stir, and he said Thursday that he's received mostly positive reaction since his outburst Tuesday on the Illinois House floor.

He said he's been surprised by the attention, since his echoed similar outbursts directed at Speaker Michael Madigan and Democrats over the years by Republicans, the minority party at the Capitol.

Bost said his frustration was a long time coming. The tipping point came as lawmakers prepared to vote on a contentious plan to overhaul the state's overburdened pension system, and Democrats used a 1995 rule to block debate or amendments. Bost, from Murphysboro in southern Illinois, erupted.

Impressionist Morgana Robinson claimed last week that: “you can tell a tranny by their hands and their feet.”

Does the star of Channel 4’s Very Important People congratulate herself when she spies a woman with large shoes? Does she smile and think “Ah, look, it’s one of those trannies”, or is she humble; does she see it as an easy-peasy guessing game? I can only speculate.

I’m a trans woman and I hear these stupid comments daily. “Transsexual” has become shorthand for someone ridiculous, someone unnamed, someone that nice, middle-class people probably don’t know. Transphobia has passed the dinner table test because those who mock trans people simply don’t expect to see one of us at their dinner tables. I’d like to petition high profile trans newsreaders and politicians to raise awareness, but none exist. Trans people are today’s Aunt Sallys – and comics throw pies at us with impunity.

Jay Townsend, a campaign spokesman for Republican Rep. Nan Hayworth (NY-19) has ignited a controversy after he said, "Let's hurl some acid" at female Democratic senators.

Townsend's comments (which have since been removed) were posted Thursday on a local Facebook discussion forum for New York's 19 th congressional district. Townsend was responding to comments made by a commenter named "Tom" during an online debate over gas prices. Townsend wrote:

"Listen to Tom. What a little bee he has in his bonnet. Buzz Buzz. My question today … when is Tommy boy going to weigh in on all the Lilly Ledbetter hypocrites who claim to be fighting the War on Women? Let's hurl some acid at those female democratic Senators who won't abide the mandates they want to impose on the private sector."

Hayworth's office has not yet responded to requests for comment on the matter.

Townsend is described on his own personal website an "adept wordsmith," and is far from a political newcomer. In 2010, he was the Republican nominee in the U.S. Senate race against Democratic Sen. Chuck Schumer. Townsend eventually lost that race by 18 points. He has worked on more than 300 campaigns in 25 different states, according to his website.

The campaign for Rich Becker, who is running to unseat Hayworth, posted a statement online Thursday calling for Townsend to be fired.

"I'd be fired - immediately and with cause - if I said stuff like this. Which begs the question: why is Jay Townsend still Nan Hayworth's spokesman," wrote Becker campaign spokesman Barry Caro. "Does she agree that 'bin Laden is dead in spite of Obama?' Does she agree that we should 'hurl some acid' at politicians her campaign disagrees with? These comments are simply unprofessional and should never cross the lips of a Congressional spokesman." 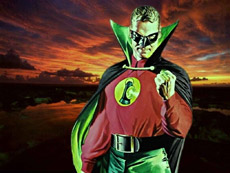 DC Comics has been teasing the reveal of a major gay character for some time, and they’ve finally revealed who it will be: Alan Scott, known as Green Lantern, a media mogul, will be revealed to be gay in a story that resets his character. When this news came out, I said it would be best if the supposedly-iconic character DC was going to have come out was someone for whom the revelation that he or she was gay helped tie together things we’d always known about the character and their personality, much as J.K. Rowling did with Albus Dumbledore. I’m not sure if a pure reset of an existing character quite does that. And over at Topless Robot, Rob Bricken explains that the move isn’t as bold as DC insisted it would be, in part because Scott is not even the most prominent Green Lantern in comics today, and in part because his arc as a gay man will be taking place in an alternate DC Comics universe, rather than altering our sense of the core universe, where a straight Alan Scott presumably is still going about his business.

DC Comics was never going to turn one of their genuinely iconic characters gay. An out and proud Batman would have been a great joke on moralists like Frederic Wertham, the psychiatrist who saw sexual perversion everywhere he looked in comic books. A gay Superman would have been a fascinating exploration of what it means to feel like an alien in human society. But it’s hard to imagine that DC would have done something so bold simply to demonstrate its commitment to diversity, or to compete in a market where Marvel Comics, and even Archie Comics, are directly selling themselves both to gay readers and to straight readers who live among and love the gay people in their lives.

Checking the box and including a gay character in your universe, whether you frame them as a stereotype or develop them well or not, isn’t really enough to earn a company points anymore. And I actually think the somewhat disappointed reaction to this revelation is a good thing because it suggests that our expectations are getting more ambitious. If companies want credit for doing something different and genuinely brave, rather than simply meeting their basic obligations to represent the world around them, they need to tell stories or highlight kinds of characters that no one else has the courage to represent. The L.A. Complex gets points for portraying gay characters who aren’t white and male, the standard television default. Happy Endings gets credit for showing us a gay man who’s chubby, romantic, semi-downwardly mobile. Maybe DC Comics will do something genuinely exciting with Alan Scott, but it’s fine not to shower the company with gratitude for simply nodding towards a diversity quota, and doing so with the same kind of gay person who’s been acceptable in pop culture for years: rich and white.

Getting rather tired of all the dudebro comments saying it should have Wonder Woman or Power Girl...

The victim of suspected killer Luka Rocco Magnotta is believed to be Lin Jun, a Chinese student at Concordia University who was reported missing the day before the suitcase with the human torso was discovered, La Presse reports.

The Chinese consulate in Montreal says the 33-year-old, born in Wuhan, the capital of Hubei province, had been in Montreal since July of last year.