INTERNATIONAL PROTESTS against globalization have cast a bright light on how transnational corporations run roughshod over ordinary people's lives everywhere.

In reaction, activists have come up with a broad range of responses--from demonstrations in the streets to personal choices about consumption.

Most activists don't see any contradiction between protesting in Washington, D.C., against George W. Bush's theft of the White House and deciding to eat only organic food or ride a bicycle to reduce pollution.

This isn't an argument against anyone deciding to make personal changes that suit them. People should have the right to eat and live as they please. But can such choices have any significant impact on society? 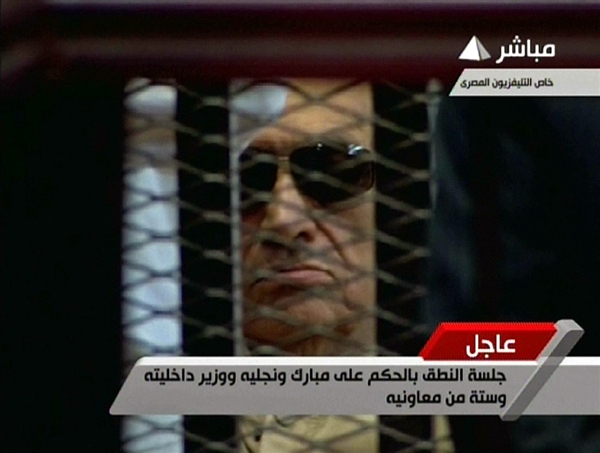 An image taken from Egyptian state TV shows ousted Egyptian president Hosni Mubarak sitting inside a cage in a courtroom during his verdict hearing in Cairo Saturday.

Ousted Egyptian leader Hosni Mubarak was sentenced to life in prison Saturday after he was convicted of ordering troops to open fire on demonstrators, a verdict that saw angry protesters disrupt the proceedings.

Punches were thrown as victims' family members protested the verdict inside the court. Others stood on chairs, raising fists in the air and chanting the sentence was not enough.

Mubarak and the judge were removed from the courtroom amid the melee.

The sentence handed down by Judge Ahmed Refaat was the final chapter of Mubarak's three decade, iron rule of Egypt that was brought to an end in February 2011.

Before a packed courtroom, Refaat praised the revolution and said it offered people relief after living "in 30 years of dark without any hope."

About 840 people died and more than 6,000 others were wounded in the uprising, according to Amnesty International.

Refaat chose the lesser of two sentences. Mubarak could have received the death penalty.

But Refaat cleared Mubarak's sons -- Gamal and Alaa -- and a handful of Mubarak's aides.

Mubarak and his sons arrived Saturday morning at the Cairo Police Academy, where the trial was held, under tight security. Police in riot gear lined up behind a barricade separating them from demonstrators.

Hundreds outside the court chanted: "Execution is the only solution" and "he who kills must die."

Families of those killed during the protests carried posters emblazoned with photos of the dead while dozens of Mubarak supporters chanted ''innocent.''

[Sorry, this story is a little old because it was rejected the first time I tried to post it, and I didn't have time to repost yesterday. Apologies if it is now outdated. (Mods.: Please note, there IS a cut.)]

U.S. Department of Justice ordered Florida’s elections division to halt a systematic effort to find and purge the state’s voter rolls of noncitizens.

TO THE MODS: Given some of the shenanigans that have been going on lately in a substantial number of states, I think this community could really use a "voter suppression" tag.

Over the Victoria Day weekend Canadians lost another vital national institution that quietly stood on guard for the nation's 4 million lakes.

Just as citizens flocked to their cottages and launched their boats, the government of Stephen Harper pulled the plug on Canada's greatest freshwater defender and scientific achievement: the Experimental Lakes Area.

And though its muzzled scientists haven't been able to talk about the program's impressive research in recent years without Ottawa's approval, this uniquely Canadian endeavor both changed and educated the world. It also drove global public policy on watershed protection.

In a move that stunned and appalled scientists around the world the Harper government laid off as many as 40 scientists associated with the legendary program working out the Department of Fisheries and Oceans Winnipeg's office.

According to Ottawa's tiresome newspeak, the program no longer "aligned with the department's mandate and is not responding to our research priorities."
( Collapse )

Valuing only what makes a profit allows a few people to get rich and impoverishes the majority. This reminds me of the Bushes and who they represented. Oh Canada. :(

Despite the fact that the number of teen pregnancies has steadily declined over the last decade, 55 births in 1,000 still occur among 15- to 19-year-olds in the state of Mississippi compared to a national average of 34.3 according to the National Center for Health Statistics.

The state is has the highest rate of teen pregnancies in the nation, a statistic that Governor Phil Bryant has created a task force to combat, a giant leap forward in a state that traditionally avoids discussing the topic at all.

The horrific face-eating arrest in Miami and several other seemingly subhuman acts has many people wondering what's behind this flesh-munching wave of terror.

A zombie apocalypse, however, is not what we should be worried about, at least according to the federal government.


I am most disturbed by the fact that the CDC already had a website devoted to surviving a zombie apocalypse. It looks like the Zombie Blog has been taken down, so I google cached it for you all:


edited to add: yes, the Zombie Survival Guide appeared in 2011. I made sure to include the date in the google cache of the page. My point was that - whether these recent incidents had led to mass hysteria or not - it is not appropriate for the CDC to devote an entire section of a webpage to a fictional "public health menace." It makes a mockery of all of the real work the CDC does in disaster situations or outbreaks.

A 25-year-old male was killed and seven other people were injured in Toronto Saturday evening during what the city's police chief called a "wanton and incredibly dangerous" shooting at the Eaton Centre shopping mall.

The eight victims -- four female and four male -- include one 13-year-old boy who sustained a gunshot wound and is in critical condition, reported police.

Const. Victor Kwong told reporters that one pregnant female who was knocked down in the rush was taken to hospital after going into labour.

The other victims include two males and two females with gunshot wounds who are all in serious condition. One female was also taken to hospital with minor "grazing" injuries.

Police have yet to apprehend a suspect.

Rep. Joe Walsh (R-Ill.) isn't backing down from controversial comments he made last week about Rev. Jesse Jackson -- instead, he's ramping them up.

"All Jesse Jackson is trying to do is to keep African Americans down on some plantation," he said on the "Big John & Amy" radio show Friday, as reported by Chicagoist.

Walsh came under fire from Democrats earlier this week for telling constituents that the party wants Hispanics and African Americans to be dependent on government. He said Jackson, a civil rights leader, wants the same thing.

"Jesse Jackson would be out of work if [African Americans] weren't dependent on government," he said at a town hall meeting last week.

Tammy Duckworth, his Democratic opponent, quickly responded to the remarks. Duckworth said in a statement that Walsh's comments about Hispanics and African Americans were "insensitive." She went on to say that "Congressman Walsh’s remarks are not only offensive, they are especially irresponsible coming from a sitting member of Congress."

Jackson also responded, telling the Associated Press that Walsh seemed to be attempting to "incite and polarize" voters. The reverend said that the majority of Americans receiving aid for the government are not non-whites and added that he has devoted his life to gaining equal protection under the law for "all vulnerable Americans."

One of the radio hosts echoed that statement on Friday, telling Walsh that "groups are still being discriminated against ... all Jesse Jackson is trying to do is gain equal protection under the law."

source
Additional sources: one with a constituent defending him, two
Collapse