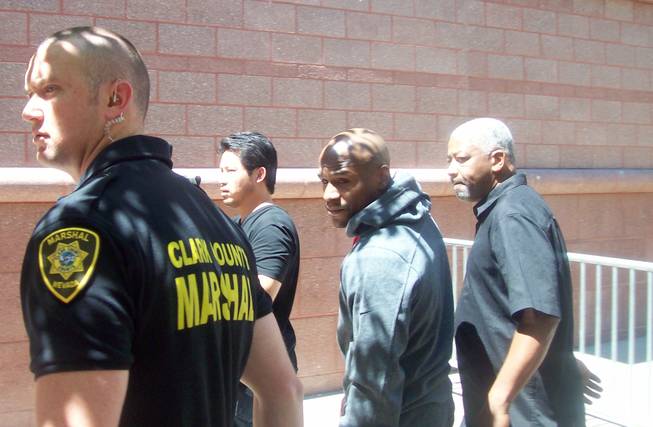 
Attorneys for Floyd Mayweather Jr. have filed a motion requesting the boxing champion be allowed to serve out the remainder of his 90-day sentence at home. The request comes 12 days into Mayweather’s incarceration at the Clark County Detention Center.

Citing lack of exercise, poor nutrition and the special conditions under which Mayweather is being held due to his celebrity status, the boxer’s attorney, Richard Wright, argues his client may never fight again if he is forced to remain in jail for the full term.

An advocate for victims of domestic violence counters the fighter should have thought about those consequences before battering his girlfriend.

The church’s edict was the latest crackdown by the Vatican and US bishops on American nuns who as scholars, activists, and institutional leaders push the boundaries of Catholic doctrine.

But, as leaders of a group of nuns arrive in Rome on Tuesday to meet with Vatican officials over recent sanctions, their supporters say the hierarchy’s actions have widened the chasm between the church’s male overseers and ordinary Catholics. Sisters have long been the face of the church to many of its people through their work in education, health care, and social justice.

“The people in the pew are somewhere between completely confused and hopping mad at this point, because these are people you just don’t go after,’’ said Paul Lakeland, director of the Center for Catholic Studies at Fairfield University. “It doesn’t matter if you are a moderate or conservative or a liberal Catholic - we all love our nuns.’’

The church hierarchy says it is simply acting to preserve the purity of the church.

The last two years have seen a remarkable number of sanctions against American nuns, who numbered 56,000 in 2011, down from nearly 180,000 in 1965. In 2010, a sister in Arizona was excommunicated for her role in allowing an abortion to be performed in a Catholic hospital. (The patient was a 27-year-old mother of four whose pregnancy doctors deemed life-threatening.)

Last year, US bishops condemned a book by Sister Elizabeth Johnson, a theologian at Fordham University, that the bishops found to contain numerous “misrepresentations, ambiguities, and errors’’ about church teaching.

And in April, in its most significant move thus far, the Vatican issued a stern rebuke of the largest leadership organization of American nuns, the Leadership Conference of Women Religious, and assigned the bishop of Seattle to oversee its activities.

The Vatican criticized the Leadership Conference for spending too little time promoting the church’s teachings against abortion and gay marriage, failing to correct unacceptable statements by speakers at its annual conventions, and opposing church teaching on the ordination of women.

“The Vatican’s view is this: If we foster a purer, more orthodox church, it will be naturally more attractive to people, and one way to create a purer church is, in part, to enforce these doctrinal rules,’’ said the Rev. James Martin, a Jesuit priest and culture editor of America magazine.

Representatives of the Leadership Conference, who called the Vatican’s criticism unsubstantiated and said it had “caused scandal and pain throughout the church community,’’ will meet Tuesday with Cardinal William Levada, the former bishop of San Francisco and the prefect for the Congregation for the Doctrine of the Faith. A Vatican spokesman said Monday that church officials hoped to achieve “a reciprocal understanding’’ of the Vatican’s actions.

More at the source. (There's an interesting paragraph in there about how the nuns' increased outspokenness started when Pope Pius XII encouraged them to get university degrees so as to better serve the church.)

tl;dr: Nuns are awesome and can stay, everyone else in the Catholic church hierarchy can gtfo.

MIAMI (CBSMiami) — Doctors have released photographs of Ronald Poppo, more than two weeks after the homeless man had much of his face chewed off during an attack by so-called Causeway Cannibal Rudy Eugene over the Memorial Day weekend.

Doctors from Jackson Memorial Hospital told reporters Tuesday that Poppo is awake and alert and showed a photograph of Poppo walking down a hospital hallway, supported by hospital staff on either side of him. It’s not known when the picture was taken.

The photo shows the upper two-thirds of Poppo’s face covered in thick, bloody scabs. He’s missing his nose and both eye sockets are covered, one with gauze and one with what appears to be a skin graft.

Jackson doctors said they are hopeful Poppo may have some vision in the future, but said it’s still too early to tell.

The Jackson Memorial Foundation has set up a fund to assist Poppo. So far they’ve raised $15,000.

You can also make a donation through the Jackson Memorial Foundation website, www.jmf.org. Click the “Take Action Now” tab, and then click on donations. Once you are on the donation page, select “other” in the contribution details section and input: Ronald Poppo.

You may also write a check to Jackson Memorial Foundation and include Mr. Poppo’s name in the memo portion. Checks can be mailed to:

Thought everyone might appreciate an update as to how the victim is recovering.

Source has both censored and uncensored photos of his recovery. Proceed with caution.

As the Japanese government moves full steam ahead with plans to bring back online the first nuclear reactors since last year’s crisis in Fukushima, the town of Oi is preparing to roll out the futons for a pair of long-term visiting V.I.P.s from Tokyo.

The two high-ranking government officials are being sent to the rural seaside town as part of a promise made last month by nuclear disaster minister Goshi Hosono, in order to pave the way for restarts of Oi’s No. 3 and No. 4 reactors—a controversial decision amid widespread public anxiety about nuclear safety.

To many in Japan, the move brings to mind a modern-day interpretation of the feudal-era practice of “sankin-kotai,” or alternating residency, in which local warlords returning to their seats in the countryside were forced to leave their families in Tokyo, as high-class hostages.

In today’s modern version, deputy trade minister Seishu Makino, a ruling party lawmaker, and top nuclear regulator Shinichi Kuroki, will likely be dispatched to help oversee operations at the Oi plant, according to ministry officials, who half-jokingly refer to the two as “hostages” of Tokyo’s nuclear policy.

The pair could be stationed as soon as next week at Oi’s Nuclear Emergency Response Center, which is about seven kilometers from the plant. The center is one of 20-odd facilities built near nuclear power stations in order to provide a central operations hub for civil authorities and plant operators in the event of minor mishaps or major disasters.

What makes some of us uncomfortable with bisexual women? It is because we think they're either lesbians having straight sex or straight women testing out their fantasies on us before returning to men?

In today's post-modern, queer-focused world, bisexuality is being promoted to lesbians as the latest fashionable trend. This has resulted in lesbian politics, namely feminism, being passed over for sexual hedonism, where the only thing that matters is sexual pleasure and desire. Similarly, bisexuality is sold to heterosexual women as some type of recreational activity far from their "natural home" of straight sex. It is seen as "temporary lesbianism."

Matthew Inman, who runs the hilarious and extremely popular site The Oatmeal, announced the other day that he had been threatened by a lawyer representing FunnyJunk.com over this post in which he noted that FunnyJunk had reposted hundreds of his original comics without giving him any credit whatsoever or linking back to his site. Its response was to hire a lawyer to threaten him with a lawsuit for defamation on the theory that the post was false. Unless, of course, Inman agrees to pay $20,000 in "damages."

That was a bad move.

As you can see here, not only is Inman not someone who is likely to back down, he is about infinitely times more creative than whatever drone is running FunnyJunk.com. He has reposted the letter, annotated it and illustrated it, and included an enormous list of links to pages on FunnyJunk.com where his work was even then being displayed without credit.  (They have since taken those pages down, because they're sneaky like that and also probably don't know about the Wayback Machine.)</p>

He also declared that rather than pay the drone and/or his lawyer $20,000, he would try to raise that much money through donations, "take a photo of the raised money" and "mail you that photo, along with this drawing of your mom seducing a Kodiak bear" before donating the money to charity.

Those are a few reasons why you should not mess with Matthew Inman.

The lawyer making these threats needs to do some more research, also, assuming he does any of that. Truth is a defense to defamation claims, for one thing, and there are also First Amendment issues involved here. Rather than rambling on about that, though, let me direct you to a post by another guy not to mess with, namely Ken over at Popehat.  He also posted on this event today, and has previously written in detail about California's "anti-SLAPP" law, which is designed to allow the target of a lawsuit like the one being threatened here to move to dismiss at an early stage and (usually) to recover attorneys' fees.

It looks like Inman is located in Washington, and Washington has an anti-SLAPP law much like California's. My guess is that FunnyJunk will just quietly fade away, or at least they will if they have any sense at all. If not, they'll likely get slapped around a little more.

The rates of suicide among black females are the lowest in the nation. Now Veterans Affairs officials want know why and how it can help troops.

Black women have the lowest rates of suicide in the country, and although it’s not completely understood why, Veterans Affairs officials hope to re-create elements of black female culture that may help stop military veterans from killing themselves.

Women - particularly black women - provide each other social support and encouragement categorized by the opportunity to speak honestly with their peers, said Jan Kemp, mental health director for suicide prevention at the VA.

“The sense of community among themselves, and the ... built-in support that they get from each other is something we’re paying a lot of attention to, and trying to find ways to emulate,” Kemp said. “I think often that veterans and men don’t have that same sort of personal support, and we have to build that for them,” she said.