Did Obama Lied About Being a Sekret Socialist as Well?

The Republican Arizona secretary of state told a GOP audience near Phoenix that he believes President Barack Obama was born in Hawaii, but claimed to be born in Kenya in order to get into college.

Secretary of State Ken Bennett said he believes Obama made the Kenya claim to get into college and has had his college records sealed in order to prevent the information from coming out, the Arizona Republic reports. Bennett offered no proof, but claimed Obama has spent millions to have the records sealed.

"I actually think he was fibbing about being born in Kenya when he was trying to get into college and doing things like writing a book and on and on and on.

"So if there was weird stuff going on, I actually think it was happening back in his college days because I think he has spent $1.5 or $2 million through attorneys to have all the college records and all that stuff sealed.

"So if you're spending money to seal something, that's probably where the hanky panky was going on. "

Bennett dialed back on earlier statements that he was seeking Obama's original birth certificate from Hawaii officials, which he claimed he needed in order to place the president on the Arizona ballot. Bennett stressed to his audience that he believes that Obama was born in the U.S.

Bennett, running for governor in the 2014 election, started his speech by calling for the audience to unite behind Mitt Romney's presidential candidacy and "do everything we possibly can to elect Mitt Romney in November," according to a YouTube video of his remarks.

The U.S. Conference of Catholic Bishops launches what it's calling the "Fortnight for Freedom" on Thursday — two weeks of praying and fasting because the bishops believe the church's religious freedom is being threatened by the Obama administration's health care policies.

"This is the first time that I've felt personally attacked by my government," parishioner Kathleen Burke says after a service at Our Lady of Lourdes Catholic Church in Bethesda, Md.

Another parishioner, Tom Shuler, says the government has always made exceptions for religious organizations to adhere to their beliefs, until now.

"The Obama administration and all of the accompanying executives there are clearly anti-religious," Shuler says.

source proving once against that nobody complains more than the ordained. The fucking nerve of them to compare President Obama to Hitler and Stalin. I was driving as I heard this report on NPR and rolled my eyes several times. Nobody is taking religious freedom away, and nobody is fucking forcing ANYBODY to use birth control.

Although I gotta love the part where even the "faithful" are starting to not take the church seriously.

If you mess with the Olympics trademark, a cloud of legal hurt will descend on you faster than Tyson Gay in the Men's 100 meters. Case in point: The U.S. Olympic Committee has sent a cease and desist letter to a knitting-based social network for hosting a knitting "olympics." Now, knitters are in revolt.

2012 was to be the third year that the knitting social network Ravelry—yes, this exists and is surprisingly popular—hosted a "Ravelympics," a knitting competition for users that includes events like an "afghan marathon," and "scarf hockey." Knitters were supposed to compete in their events while watching the actual Games on TV.

But that was before the U.S. Olympics Committee got wind of it and sent Ravelry a cease & desist, ( Collapse )

MEMBERS of a junior netball club have slammed a VCAT decision to allow a 185-centimetre tall, 13-year-old boy interim permission to play in an all-girls' competition.

The audio of the February 26 interviews, made public late Wednesday, is part of discovery items released by Zimmerman's defense team. The recordings represent the first time Zimmerman is heard giving his account in his own words.

Also released were audio and video showing the techniques used by the police department in the investigation: interviews conducted in the days after the shooting, a video of a voice stress test administered to Zimmerman by police and his videotaped re-enactment of the incident for authorities.

Zimmerman, 28, is charged with second-degree murder in Martin's February 26 shooting death. Zimmerman has said he shot Martin in self-defense, but Martin's family and civil rights activists across the country said Zimmerman, who is white and Hispanic, racially profiled Martin and ignored a 911 dispatcher's advice not to follow him.

In an interview just after the shooting, Zimmerman told police that the struggle began when Martin "jumped out from the bushes" and punched him in the face, knocking him down. 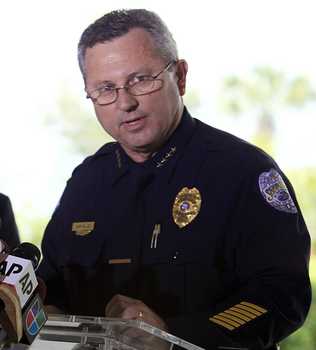 Sanford’s city manager ended Police Chief Bill Lee’s employment, citing the adverse impact the chief’s handling of the Trayvon Martin case has had on the city

The Sanford police chief who failed to arrest George Zimmerman immediately after the fatal shooting of Miami-Dade teen Trayvon Martin four months ago — and brought national attention and derision to the Central Florida city — has been terminated.

The announcement was made late Wednesday night by Sanford City Manager Norton Bonaparte, who said in a news release that Police Chief Bill Lee “has been relieved of his duties” effective immediately. The chief had been on paid leave.

Bonaparte implied the firing stemmed from the impact of Lee’s handling of the Trayvon Martin on the city of Sanford.

“I have come to this decision in light of the escalating divisiveness that has taken hold of the city,” the manager said in the statement. The decision was made after a meeting earlier in the day.

“After much thoughtful discussion and deep consideration for the issues facing the city of Sanford, I have determined the police chief needs to have the trust and respect of the elected officials and the confidence of the entire community,” Bonaparte said in the statement. “We need to move forward with a police chief that all the citizens of Sanford can support.”

A nationwide search will begin for a replacement.
( Collapse )

Someday, it will go down in history as the first trial of the modern American mafia. Of course, you won't hear the recent financial corruption case, United States of America v. Carollo, Goldberg and Grimm, called anything like that. If you heard about it at all, you're probably either in the municipal bond business or married to an antitrust lawyer. Even then, all you probably heard was that a threesome of bit players on Wall Street got convicted of obscure antitrust violations in one of the most inscrutable, jargon-packed legal snoozefests since the government's massive case against Microsoft in the Nineties – not exactly the thrilling courtroom drama offered by the famed trials of old-school mobsters like Al Capone or Anthony "Tony Ducks" Corallo.

But this just-completed trial in downtown New York against three faceless financial executives really was historic. Over 10 years in the making, the case allowed federal prosecutors to make public for the first time the astonishing inner workings of the reigning American crime syndicate, which now operates not out of Little Italy and Las Vegas, but out of Wall Street.

The defendants in the case – Dominick Carollo, Steven Goldberg and Peter Grimm – worked for GE Capital, the finance arm of General Electric. Along with virtually every major bank and finance company on Wall Street – not just GE, but J.P. Morgan Chase, Bank of America, UBS, Lehman Brothers, Bear Stearns, Wachovia and more – these three Wall Street wiseguys spent the past decade taking part in a breathtakingly broad scheme to skim billions of dollars from the coffers of cities and small towns across America. The banks achieved this gigantic rip-off by secretly colluding to rig the public bids on municipal bonds, a business worth $3.7 trillion. By conspiring to lower the interest rates that towns earn on these investments, the banks systematically stole from schools, hospitals, libraries and nursing homes – from "virtually every state, district and territory in the United States," according to one settlement. And they did it so cleverly that the victims never even knew they were being ­cheated. No thumbs were broken, and nobody ended up in a landfill in New Jersey, but money disappeared, lots and lots of it, and its manner of disappearance had a familiar name: organized crime.

In fact, stripped of all the camouflaging financial verbiage, the crimes the defendants and their co-conspirators committed were virtually indistinguishable from the kind of thuggery practiced for decades by the Mafia, which has long made manipulation of public bids for things like garbage collection and construction contracts a cornerstone of its business. What's more, in the manner of old mob trials, Wall Street's secret machinations were revealed during the Carollo trial through crackling wiretap recordings and the lurid testimony of cooperating witnesses, who came into court with bowed heads, pointing fingers at their accomplices. The new-age gangsters even invented an elaborate code to hide their crimes. Like Elizabethan highway robbers who spoke in thieves' cant, or Italian mobsters who talked about "getting a button man to clip the capo," on tape after tape these Wall Street crooks coughed up phrases like "pull a nickel out" or "get to the right level" or "you're hanging out there" – all code words used to manipulate the interest rates on municipal bonds. The only thing that made this trial different from a typical mob trial was the scale of the crime.

Reading this article I felt sick, these guys dont have a conscience. I dont know if it was because they were greedy, or if it was hubris, or if they truly are psychopaths, but there is clearly something wrong with their heads...

The Google Endangered Languages Project website, which launched Thursday and coincided with National Aboriginal Day, invites language experts from around the world to post videos, audio clips, books and other publications to catalogue endangered or extinct languages.

It was created by a committee of international language experts called the Alliance for Linguistic Development and Google staff. The First Peoples' Cultural Council, a First Nations-run Crown corporation based on Vancouver Island, is chair of the committee and will eventually oversee the project.

Users can type an endangered language such as 'Squamish' into the search engine and find out information on its classification and origin. The website's creators hope that eventually samples of the language will be available for download.

Only half of the 7,000 languages spoken in the world are expected to survive past the end of the century, according to the website.

Dr. Lorna Williams, chair of the First Peoples' Cultural Council, says the website is an opportunity for people to share the work that is being done to support and protect indigenous languages.

"Today we celebrate Google's contribution as a language champion in the effort to revitalize the world's endangered languages," she said.

"We are very grateful to the First Peoples' Cultural Council's help in ensuring that this project addresses the needs and interests of language communities working to protect their languages," said Rissman.

Find out how many people speak your local indigenous language! Have you seen ways of supporting it?

Why would Scofield, a fourth generation deaf person, feel that way? He said it's because of what happened when he and his three children took their deaf dog, Glacier, for a walk.

The adopted son of former Penn State assistant football coach Jerry Sandusky said he was abused by his father and was prepared to testify on behalf of the prosecution at his father's trial, according to a statement released Thursday by the son's attorneys.

The announcement on behalf of Matt Sandusky, one of Jerry Sandusky’s six adopted children, came hours after a sequestered jury began deliberating the fate of the former coach, who is facing 48 criminal counts for alleged child sexual abuse.

Mr Clegg said the education secretary's announcement was "self-evidently not policy that has been discussed or agreed within the coalition".

The Daily Mail said Mr Gove wants to bring back a system similar to the O-Levels, with CSEs for less able pupils.