HOUSTON (AP) - Attorneys for a retired Texas firefighter who was convicted of murder for shooting his unarmed neighbor during a dispute over a noisy birthday party prepared to present witnesses in the punishment phase of the man's trial.

Forty-six-year-old Raul Rodriguez argued he was within his rights under Texas' version of a stand-your-ground law when he killed Kelly Danaher in 2010.

The Supreme Court is expected to rule on the constitutionality of the Affordable Care Act this week and could potentially strike down part or the whole of ‘Obamacare.’ Below are 10 things you will miss about the law if the justices invalidate it:

1) Access to health insurance for 30 million Americans and lower premiums. More than 30 million uninsured Americans will find coverage under the law. Middle-class families who buy health care coverage through the exchanges will be eligible for refundable and advanceable premium credits and cost-sharing subsidies to ensure that the coverage they have is affordable.

Washington (CNN) -- The U.S. Supreme Court struck down key parts of an Arizona law Monday that sought to deter illegal immigration, but it let stand a controversial provision that lets police check a person's immigration status while enforcing other laws.

In a decision sure to ripple across the political landscape in a presidential election year, the court's 5-3 ruling upheld the authority of the federal government to set immigration policy and laws.

"The national government has significant power to regulate immigration," Justice Anthony Kennedy wrote in the majority opinion. "Arizona may have understandable frustrations with the problems caused by illegal immigration while that process continues, but the state may not pursue policies that undermined federal law."

The Supreme Court concluded that the federal government had the power to block the law -- known as SB1070. Yet the court let stand one of the most controversial parts of the bill -- a provision that lets police check a person's immigration status while enforcing other laws if "reasonable suspicion" exists that the person is in the United States illegally.

Hundreds of thousands of young people could be stripped of housing benefit and forced to live with their parents as part of a new welfare crackdown signalled by David Cameron.

The Prime Minister insisted the system was giving the wrong incentives as he urged more action to prevent feckless families relying on state handouts.

The comments, in an interview with the Mail on Sunday, come ahead of a keynote speech on welfare Mr Cameron is due to deliver next week.

There are many ways to judge a play. Did you enjoy it on the night? Would you recommend it to others? Do you want to see it again? And does it make you think, and keep thinking?

One would imagine the first of these is the most important, and likely to dictate the answer to the others. But with Laura Wade’s new play Posh, I did not enjoy the experience of watching it. Yet I have recommended it to everyone, am planning to see it again soon, and I have spent at least part of every day since I saw it thinking about what it means, what I really think about it and whether it has lasting political and cultural significance.

So why did I not enjoy it, when it is clearly topical, well-written, well cast and acted, and likely to damage the Tories? The answer is that for parts of it I felt quite ill. Not ill in the manner of the Riot Club members throwing up after downing too much wine, champagne and spirits. But ill at the thought that this might just be an accurate portrayal of the Bullingdon Club on which it is so clearly based, and therefore a picture of our current rulers, their values, what they really think, believe and say when they are not minding their ps and qs whilst decontaminating the Tory brand.

The justices ruled in a 5-to-4 decision that such sentencing for those under 18 violated the Eighth Amendment’s ban on cruel and unusual punishment. The ruling left open the possibility of judges’ sentencing juveniles to life imprisonment without parole in individual circumstances but said state laws could not automatically impose such sentences.

“Mandatory life without parole for a juvenile precludes consideration of his chronological age and its hallmark features — among them, immaturity, impetuosity, and failure to appreciate risks and consequences,” Justice Elena Kagan wrote for the majority. “It prevents taking into account the family and home environment that surrounds him — and from which he cannot usually extricate himself — no matter how brutal or dysfunctional.”

Justice Kagan’s opinion argued that the two cases at issue, involving 14-year-old boys who had taken part in murders in Arkansas and Alabama, were an extension of the court’s recent rulings on the young. Those rulings asserted that they still had unformed emotional and moral structures and that treating them as adults violated “the evolving standards of decency that mark the progress of a maturing society.”

One such recent decision declared it unconstitutional to impose life sentences on juveniles who were involved in crimes that did not include killing, and others barred the death penalty from being imposed on teenagers and the mentally retarded.

Nearly 2,500 juvenile offenders are serving life sentences without parole in the United States. Human rights groups say there are almost no other countries that put teenagers in prison and keep them there to die without the possibility of parole.

On the face of it at least, Japan’s police are the most brilliant law enforcers in world history. Greater Tokyo, after all, is a megalopolis of about 37 million people, where the kind of crime regarded as routine in most foreign cities is virtually unknown. According to Japan’s Ministry of Foreign Affairs, there were about half the number of burglaries in Tokyo last year as there were in New York, a smaller city, and less than a fifth the number of homicides. Even in the seediest parts of town, women walk home alone late at night without fear of being molested. [OP note: LOL NO, article written by a guy.]

The police believe that because Japan is one of the world’s most crime-free societies, they must be great crime fighters. In fact, the opposite is true: Japan is peaceful, safe and regimented not because of, but despite, the frequently disgraceful performance of its guardians. Individually, many Japanese police officers are honest and dedicated. But as an institution, the force they serve is arrogant, complacent and incompetent. Rarely has this been so obvious as in the last few days.

Japan has been reeling over the case of a 45-year-old Nepalese man, Govinda Prasad Mainali, who returned to Katmandu last weekend after 15 years in detention. At the end of a prolonged trial (he was first cleared in a lower court), he was convicted of murdering a Japanese woman in Tokyo in 1997. The evidence was circumstantial; Mr. Govinda insisted on his innocence. After years of badgering by his lawyers, prosecutors finally surrendered DNA samples, which made it clear that he had told the truth, and that another, unidentified, man had carried out the crime.

As for the very last Aum dude they juuust caught...Takahashi had been living in HIS HOME TOWN and people had been reporting him to the cops for years, and they couldn't catch him (and the reason they got him now was not because of sleuthy detective work, but because he was a net cafe, someone saw him and called it in. They police got there right after he finished paying and was about to leave.) 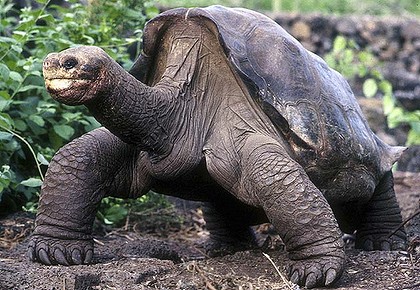 Lonesome George has died, leaving the world one species poorer.

The only remaining Pinta Island tortoise and celebrated conservation icon passed away on Sunday, the Galapagos National Park Service said in a statement.

Estimated to be more than 100-years-old, the creature's cause of death remains unclear and a necropsy is planned.

WRIGHTSTOWN, N.J. — An Air Force airman and his partner have been united in a civil union ceremony held at the military base where the airman is stationed.

Dozens of friends and family members attended Saturday afternoon’s ceremony for Tech. Sgt. Erwynn Umali and Will Behrens. It was presided over by Kay Reeb, a Navy chaplain with the Evangelical Lutheran Church in America, who also serves at Joint Base McGuire-Dix-Lakehurst.

“We are so honored to be a part of this historic moment to be one of the first gay couples allowed to unite in a civil union on a military base,” the couple said in a statement after the ceremony.

“We hope to be an inspiration to others in the LGBT community that struggle with the challenge of marriage equality. And that this issue is not just about the military, but the equal sacrifice and shared burdens of our loved ones who are civilians.”

Reeb, who had never presided over a civil union ceremony before, said she was delighted to take part. ( Collapse )

source. Saw this on facebook and thought we could use a happy story.

Earlier this month NPR profiled Alex Hernandez, a member of a Mexican third gender. This prompted me to re-post our discussion of muxes from 2008. Images of Hernandez are added at the end.

A New York Times article this week briefly profiles muxes, a third “gender” widely accepted in Oaxaca, Mexico. According to the article, this part of Mexico has retained many of the pre-colonial traditions. One of these included flexibility around gender and sexual orientation. From the article:

There, in the indigenous communities around the town of Juchitán, the world is not divided simply into gay and straight. The local Zapotec people have made room for a third category, which they call “muxes” (pronounced MOO-shays) — men who consider themselves women and live in a socially sanctioned netherworld between the two genders.

“Muxe” is a Zapotec word derived from the Spanish “mujer,” or woman; it is reserved for males who, from boyhood, have felt themselves drawn to living as a woman, anticipating roles set out for them by the community.

Not all muxes express their identities the same way. Some dress as women and take hormones to change their bodies. Others favor male clothes. What they share is that the community accepts them; many in it believe that muxes have special intellectual and artistic gifts.

These were the astonishing words uttered by Israel’s interior minister Eli Yishai in an interview recently in which he outlined the Israeli government’s view of African migrants.

He also added in the same interview which featured in the newspaper Maariv that “The infiltrators along with the Palestinians will quickly bring us to the end of the Zionist dream,”

With particular reference to the few hundred South Sudanese refugees living in Israel, the comments by made by Yishai were delivered as the government set about enforcing its new policy-to expel the South Sudanese.

A month after camera company Nikon Corp. cancelled a photo exhibit on wartime Korean “comfort women,” a judge has ordered the exhibit to open Tuesday as originally planned.

Ahn Se-hong
Kim Sun-ok was taken to China as a “comfort woman” by the Japanese military in 1942 at the age of 21.

Nikon has appealed the Tokyo District Court decision, but is preparing for the prospect that it won’t get injunctive relief before the scheduled opening at 10:30 a.m. The South Korean photographer who assembled the exhibit started taking the 38 photographs at 3 p.m. Monday afternoon to the Shinjuku salon.

“We’re ready to accept — we’re not going to do things that would go against the court decision,” Nikon spokesman Takuya Moriguchi told JRT. But he added that the company would suspend the exhibit if it received a favorable ruling any time before the show’s scheduled end July 9.