Plus Other Filthy Laundry Being Exposed.

In the debate over new laws meant to curb voter fraud in places like Florida, Democrats always charge that Republicans are trying to suppress the vote of liberal voting blocs like blacks and young people, while Republicans just laugh at such ludicrous and offensive accusations. That is, every Republican except for Florida’s former Republican Party chairman Jim Greer, who, scorned by his party and in deep legal trouble, blew the lid off what he claims was a systemic effort to suppress the black vote. In a 630-page deposition recorded over two days in late May, Greer, who is on trial for corruption charges, unloaded a litany of charges against the “whack-a-do, right-wing crazies” in his party, including the effort to suppress the black vote.

In the deposition, released to the press yesterday, Greer mentioned a December 2009 meeting with party officials. “I was upset because the political consultants and staff were talking about voter suppression and keeping blacks from voting,” he said, according to the Tampa Bay Times. He also said party officials discussed how “minority outreach programs were not fit for the Republican Party,” according to the AP.

The comments, if true (he is facing felony corruption charges and has an interest in scorning his party), would confirm what critics have long suspected. Florida Gov. Rick Scott is currently facing inquiries from the Justice Department and pressure from civil rights groups over his purging of voter rolls in the state, an effort that critics say has disproportionately targeted minorities and other Democratic voters. One group suing the state claims up to 87 percent of the voters purged from the rolls so far have been people of color, though other estimates place that number far lower. Scott has defended the purge, even though he was erroneously listed as dead himself on the rolls in 2006.
( Collapse )

A Jackson couple had their wedding rehearsal last week, two days before their scheduled big day at the Crystal Springs church where they were planning to get married.

But the couple's dream of exchanging vows in the church they had been attending was dashed when the church pastor relayed to them that some members had complained about the black couple getting married in the predominantly white First Baptist Church of Crystal Springs.

Charles and Te'Andrea Wilson said it was devastating having to move their wedding to another church only days before the July 21 wedding.( Collapse )

There's a video at the Source

Culture Secretary Jeremy Hunt narrowly avoided injuring bystanders when a bell he was ringing flew off its handle at an Olympics celebration.

Mr Hunt looked horrified as the brass bell sailed over the heads of a group of women on the deck of HMS Belfast.

He later laughed off the incident, comparing it to a scene from BBC comedy Twenty Twelve.

He was taking part in the All the Bells celebration on HMS Belfast to mark the start of the games.

The clearly relieved minister was caught on camera saying: "Oh, oh dear! Are you all right? Health and safety!

"Are you OK? There we are, disaster averted."

Ice-T: Rush Limbaugh Is 'A Racist Piece Of Sh--'

Ice-T has some major beef with Rush Limbaugh, after the radio host marveled that he knew the meaning of the word "tyranny" on Tuesday.

Ice-T recently defended gun ownership in an interview on London news, calling the right to bear arms "the last form of defense against tyranny." Limbaugh praised his stance on the issue, but found his use of the word "tyranny" with a British "sophisticate" especially remarkable.

"He knew the word 'tyranny,'" Limbaugh said. "And he knows that tyranny comes from government representatives. Double impressive."

Ice-T did not take kindly to his remarks. “Rush Limbaugh said he was impressed I knew the word 'tyranny'... He's a racist piece of sh--,” he tweeted.

Later, he responded to some of the replies, saying "Hahah some of y'all are saying Limbaugh is not racist?? Check this” and linked to an article called "Top 10 Racist Limbaugh Quotes." He also directed fans of Limbaugh and Bill O’Reilly to "UNFOLLOW now."

Video to see what Rush was saying in context:
(It's the Young Turks, but they play it on here)

In a written eulogy for her son, Jun Lin, Zhigui Du said she has developed sympathy for his alleged killer, Luka Rocco Magnotta, and will set up a foundation to help troubled youth.

Lin, 33, was killed and dismembered two months ago.

His mother did not attend a public funeral service held Thursday morning in Montreal and later told reporters at a news conference that she felt it would have been too hard for her to handle. But she wrote a eulogy for her only son.

"I have been waiting for this day to come, because my son can finally rest in peace in this land that he loves," she wrote.

She also writes about why she decided to establish a foundation in her son's name to help troubled youth in Montreal.

"We have received a lot of help and care from the people here and we want to return something back to this society, to help the youth in need, to help them find their way back to a loving home." 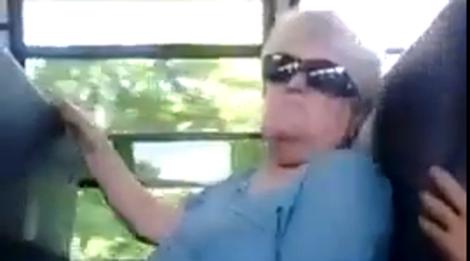 GREECE, N.Y. (AP) -- A school bus monitor who was shown in a video being relentlessly bullied by a group of boys said Friday she will retire.

Less than an hour ago, former Arkansas Governor Mike Huckabee appeared on the Family Research Council's nationally broadcast radio show Washington Watch Weekly with Tony Perkins to discuss the Chick-Fil-A controversy and to promote his self-proclaimed Chick-Fil-A Appreciation Day (August 1st.) During the broadcast, Huckabee made several inflammatory comments in response to the public outrage against statements made by Chick-Fil-A President Dan Cathy concerning "traditional" marriage.

"It's interesting," Huckabee points out, "that the group calling for tolerance is the one that is truly intolerant." Taking it to another level, Huckabee went on a short rant about "gays" who he accused of being "bullies" toward Chick-Fil-A and Dan Cathy. "They are the most intolerant group of people," Huckabee claimed before going on to say, "We let you out into the square. We don't agree with your opinions, but we let you have them."

"The Christian people are frustrated," Huckabee explained. "Chick-Fil-A is not a business of politics; they just want to sell chicken."

On the topic of politicians, however, Huckabee is astounded by the statements made by various public officials against Chick-Fil-A, notably Boston Mayor Thomas Menino. "Is he going to kick all of [the Christian preachers] out of Boston, too?" Huckabee asked.

The interview wrapped with Huckabee promoting his newest endeavor Chick-Fil-A Appreciation Day. "If you want to show your support, go out and buy a chicken sandwich on August 1st," said Huckabee.

Source: The car radio that my dad happened to turn on at the same moment that Huckabee took to the mic. I will link the interview as soon as I find it online.

I can't even with this, you guys. I want off this ride. I bet Huckabee just thought he was preaching to the choir. Well, Mike, you were wrong.

ETA: Full interview now up on the FRC blog

Tory MP Aidan Burley upset some with his tweets about the Opening Ceremony, saying, "now we can move on from leftie multi-cultural crap."

Thank God the athletes have arrived! Now we can move on from leftie multi-cultural crap. Bring back red arrows, Shakespeare and the Stones!

This morning when I spoke to him he's making clear he's not apologising or backing down - in fact he adds to those comments.

He says "parts of it were overtly political, like showing CND signs."

He think that "it was all rather clichéd about multiculturalism" though he accepts he could have phrased his tweets better.

But in comments that could further annoy, he wondered "why there was the huge, disproportionate focus on rap music when it is a small part of multiculturalism."

Downing Street pointed to the PM's tweet that: "The Opening Ceremony has been a great showcase for this country" as enough of a response to Mr Burley's tweet.

Labour now says David Cameron should show some leadership and demand an apology from Mr Burley.

But as the MP made clear to me this morning, he doesn't believe he has anything he needs to apologise for.

OP: Dearie me. Talk about misjudging the mood of the vast proportion of the country! There's always one isn't there?
Collapse