Two men unlucky enough to get both HIV and cancer have been seemingly cleared of the virus, raising hope that science may yet find a way to cure for the infection that causes AIDS, 30 years into the epidemic.

The researchers are cautious in declaring the two men cured, but more than two years after receiving bone marrow transplants, HIV can't be detected anywhere in their bodies. These two new cases are reminiscent of the so-called "Berlin patient," the only person known to have been cured of infection from the human immunodeficiency virus.

These two cases, presented as a “late-breaker” finding on Thursday at the 19th annual International AIDS Conference in Washington, D.C., are among the reasons that scientists have been speaking so openly at the event about their hopes of finding a cure.

“Everyone knows about this ‘Berlin patient’. We wanted to see if a simpler treatment would do the same thing”, said Dr. Daniel Kuritzkes of Brigham and Women’s Hospital in Boston, who oversaw the study. The widely publicized patient, Timothy Brown, was treated for leukemia with a bone marrow transplant that happened to come from a donor with a genetic mutation that makes immune cells resist HIV infection. The transplant replaced his own infected cells with healthy, AIDS-resistant cells. He is HIV-free five years later.

AIDS patients are susceptible to cancers, but they usually stop taking HIV drugs before receiving cancer treatment. “That allows the virus to come back and it infects their donor cells,” Kuritzkes said.

About 34 million people are infected with HIV, the virus that causes AIDS, globally; 25 million have died from it. While there’s no vaccine, cocktails of powerful antiviral drugs called antiretroviral therapy (ART) can keep the virus suppressed and keep patients healthy. No matter how long patients take ART, however, they are never cured. The virus lurks in the body and comes back if the drugs are stopped. Scientists want to flush out these so-called reservoirs and find a way to kill the virus for good.

Brown, and now these two other men, offer some real hope.

Dr. Timothy Henrich and colleagues at Brigham and Women’s Hospital launched a search about a year ago for HIV patients with leukemia or lymphoma who had received bone marrow stem cell transplants. Bone marrow is the body's source of immune system cells that HIV infects and it’s a likely place to look for HIV’s reservoirs.

“If you took an HIV patient getting treated for various cancers, you can check the effect on the viral reservoirs of various cancer treatments,” Kuritzkes, who works with Henrich, said. They found the two patients by asking colleagues at Dana-Farber Cancer Institute in Boston which, like Brigham and Women’s, is associated with Harvard Medical School.

Both men had endured multiple rounds of treatment for lymphoma, both had stem cell treatments and both had stayed on their HIV drugs throughout. “They went through the transplants on therapy,” Kuritzkes said.

It turns out that was key.

One patient is HIV-free two years later, and the other is seemingly uninfected three-and-a-half years later.

“They still have no detectable HIV DNA in their T-cells,” Kuritzkes said. In fact, doctors can’t find any trace of HIV in their bodies -- not in their blood plasma, not when they grow cells in the lab dishes, not by the most sensitive tests.

Can the patients be told they are cured?

“We’re being very careful not to do that,” Kuritzkes said.

For now, both men are staying on AIDS drugs until they can be carefully taken off under experimental conditions. "We are not saying, “You are like the Berlin patient’.”

Although the men are HIV-free, Kuritzkes says it's been an arduous experience for them. After being diagnosed HIV-positive, one underwent rounds of chemotherapy for Hodgkin’s disease, a kind of lymphoma, before receiving the final bone marrow transplant, called an allogeneic bone marrow transplant. It is not an easy treatment to endure.

The men, one from Boston and one from New York, were not initially told their HIV had seemingly disappeared. When researchers realized news media would cover the report, they were informed.

Neither man is being identified for privacy reasons but one is in his 50s and has been infected since the beginning of the AIDS epidemic in the early 1980s. The other man, in his 20s, was infected at birth.

The findings may not apply to all patients. Both men were a little unusual in that they had a genetic mutation that can make immune cells resistant to infection by HIV. Their new immune cells, however, which came from the donors, are fully susceptible to the virus.

“We’re never really going to be able to do bone marrow transplants in the millions of patients who are infected,” Kuritzkes said. “But if you can stimulate the virus and eliminate those cells, we can protect the remaining cells from being infected.”

Separately, two other studies presented at the conference have scientists optimistic about a cure. In one, a cancer drug called vorinostat flushed out latent HIV from a handful of patients, offering the possibility of killing these latent reservoirs. In another, about 15 French patients who got HIV drugs very early after their infections were able to stop treatment and don’t show any symptoms years later, even though they are still infected.

Organizers of the conference say the findings provide an argument for treating patients early. “(These studies) give us reason for enthusiasm, that ultimately we are going to get to where we needed to go, which is to cure people with HIV infection,” said Dr. Steven Deeks, an HIV expert at the University of California, San Francisco.

Gore Vidal, the celebrated writer, has died aged 86. He was famous for his acerbic wit. Here are some of his best quotes.

OP: Truly we will never see his like again.

So when people boycott Chick-fil-A, it means I don't get hours. Which means I don’t get money. Not just me, but ALL of the LGBT employees at Chick-fil-A. Yes, CFA hires LGBT people. No one’s been fired for being gay or coming out. It’s a job. A job that can’t be taken for granted when work is scarce across the country. We have to eat too. So sure, boycott Chick-fil-A because you don’t agree with the CEO. Will you change his mind? No. Will it change the amount of money my LGBT peers and I can earn? Probably. Boycotting Chick-fil-A doesn’t hurt the company. It hurts the employees. And it’s hard enough working for a place that doesn’t think you should get married. But it’s work. Don’t take it away because you feel righteous.

That’s what I said four days ago. I meant it then. After today, though, I take it all back.

After all, I’m still a closeted gay woman working at a Chick-fil-A in the southern United States. And things these days, well, they’re complicated.

When Monday was dead, I was harboring hope that it was because so many people were boycotting Chick-fil-A. Apparently I was suffering from delusions, or temporarily forgot I live in the Bible Belt. Sunday, all the ministers at the evangelical churches in town told their congregations to show support to Chick-fil-A by eating there. The day? Today, Wednesday, August 1, 2012.

We were so busy we nearly ran out of food. We did run out of some things, like nuggets, strips, lemonade, and waffle fries. Though we didn’t have to close early like we feared, by 10 p.m., we barely had anything left. Never before have I been so grateful that I have tomorrow off.

Customers sang “God Bless America” in the dining room. They vocalized their support for “family values” in a way that made me want to vomit. We had two protestors outside, and I took five minutes to run out, hug them, and tell them: if I weren’t working here now, I’d be out here with you.

They said, “It’s okay, we know what it’s like to have to work for a paycheck.” Hearing that was ten times better than hearing from my acquaintances on the other side of the coin: “How do you work there and still sleep at night, knowing their stance against equal rights?” I sleep with a roof over my head, which is about all I can ask.

The Conservatives could close Labour's poll lead to just one point if they made Boris Johnson the leader of their party, according to a poll published on Thursday.

A YouGov survey for The Sun suggested that with David Cameron in charge 34% of people would vote for the Tories, while 40 per cent would vote Labour.

However when asked the same question if Boris was the Tory leader, the Conservatives secured 37%, while Labour’s rating fell to 38%.

Boris is increasingly being taken seriously as a potential leader of the Tories, with a poll conducted by the Conservative Home website earlier this week showing 32% of party members wanting the mayor to succeed Cameron.

Although a subsequent poll conducted by the site published today showed that the prime minister is the overwhelming favourite of party members to lead the party into the 2015 general election.

OP: China? The USA? The biggest winner of the Olympics could well be Boris Johnson. The average Japanese person or someone in Australia might not know David Cameron but footage of Johnson arsing about has probably reached them because of the Olympics. I think this is the stage he craves. The Rupert Murdoch endorsement could yet capsize it all though. 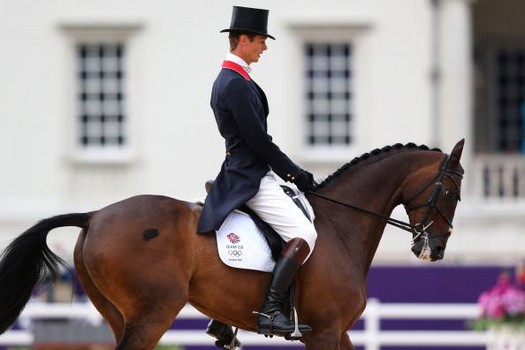 Short of mocking Shetland ponies over their lack of stature or laying into zebras for their failure to make a significant contribution to the world of equine culture, Ann Romney's horse Rafalca was always going to struggle to match the sheer incredulity that her husband managed to provoke on his recent overseas trip.

And in the event – the event in question being the individual dressage – the 15-year-old bay Oldenburg mare acquitted herself rather well. True, she and her rider, Jan Ebeling, may have been left well behind by Britain's Carl Hester, Germany's Dorothee Schneider and Denmark's Anna Kasprzak but, by Romney standards, her performance was a positive triumph.

Never for a second during her seven-minute performance did a hoof stray dangerously mouthwards, nor did she do anything at all to offend or upset the host nation. From the moment she entered the Greenwich Park equestrian arena at 12.15 on Thursday afternoon, the most famous political horse since Caligula toyed with making a consul of Incitatus seemed in her element.
( Collapse )
Collapse