"You didn't bake this," reads text on the cake, which is vanilla with vanilla frosting, according to Yahoo! News. It's a reference to Obama's "you didn't build that" remark last month, which he made while talking about the need to maintain investments in domestic infrastructure for the good of businesses.

I wonder whose preteen child or grandchild gave them the idea?

Of course a cake ordered ('cause you know they didn't bake it either) by Republicans would be vanilla with vanilla frosting. It was probably the closest they could get to making the cake look like a white sheet and hood. Klan KKKake!

"You didn't bake this"? Obviously. Who bakes their own birthday cake? Idiots.

I hope no one ate any of it. They probably laced it with poison or at least spit in it.

I wish Obama would be able to get away with cutting the cake into pieces, marching into the RNC with a bunch of Secret Service agents, each with a piece, and smashing a piece into each RNC member's face.

Eastwood attended a Romney fundraiser in Sun Valley, Idaho, said to have raised over $2m (£1.29m).

The Dirty Harry star said he was endorsing the Republican because "the country needs a boost somewhere".

In February Eastwood starred in a Chrysler Superbowl advert, Halftime in America, sparking debate over whether he backed President Barack Obama.

At the time, Eastwood had said he was not endorsing either candidate and, speaking to Fox News, said he was "certainly not politically affiliated with Mr Obama".

OP: Would anyone seriously go 'I don't know who to vote for...oh Clint likes him so I guess its Romney for me'?

Its interesting for me too because although the Labour Party in the UK have celebs that endorse them and appear in their adverts, nobody really comes out and declares their undying love for the Conservatives. They do it quietly of course but not in any big way.
Missourians will vote on Tuesday (Aug. 7) on a proposed amendment to the state constitution that supporters say would protect residents' right to pray in public, and if a recent poll is any indication, it could pass by a mammoth margin.

Supporters say the so-called "right to pray" ballot measure — known as Amendment 2 — better defines Missourians' First Amendment rights and will help to protect the state's Christians, about 80 percent of the population, who they say are under siege in the public square.

Opponents, meanwhile, say that the religious protections Amendment 2 would offer are already guaranteed by the Bill of Rights and the U.S. Constitution, and that it will open the door to all manner of unintended and costly consequences including endless taxpayer-funded lawsuits. 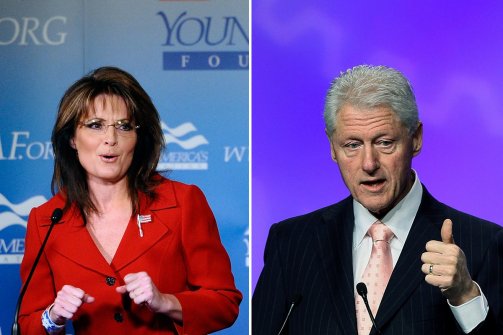 Once the darling of conservatives, the former vice-presidential candidate is now seen as something of an embarrassment—even as the previously vilified 42nd president has grown in stature. The reassessments show the perils of hyper-partisanship, says John Avlon.

Time cools passions and adds perspective. This seems especially true for the tumultuous Republican love affair with Sarah Palin. It was intense, it was irrational—and it’s over.

Quebec political leaders laid out their key platform issues on Thursday as the province's election campaign got underway. OP: the election will be on september 4th.

While attacking opponents on the tuition issue, the Liberals have made the economy the centrepiece of their campaign.

Liberal Leader Jean Charest promised Thursday to reduce unemployment to six per cent and work to create 250,000 jobs by 2017.

He said Plan Nord will be key in achieving that goal — as will increasing trade with emerging economies, such as China and India.

As for his rivals, Charest said they're more interested in sovereignty.

"There's no one interested in the economy, they're all there to hold a referendum as rapidly as possible. Now there are two ways to get a referendum in Quebec — you either go out there and vote for Madame Marois, or for Québec Solidaire or for Option Nationale, or you stay home and you don't vote. That's the other way," Charest said.