(CNN) -- NASA's $2.6 billion rover, Curiosity, carried out a challenging landing on Mars early Monday after traveling hundreds of millions of miles through space in order to explore the Red Planet.

The SUV-sized Curiosity made its dramatic arrival on Martian terrain in a spectacle popularly known as the "seven minutes of terror."

This jaw-dropping landing process, involving a sky crane and the world's largest supersonic parachute, allowed the spacecraft carrying Curiosity to target the landing area that scientists had meticulously chosen.

The mission control in NASA's Jet Propulsion Laboratory in California burst into cheers as the rover touched down. Team members hugged and high-fived one another as Curiosity beamed back the first pictures from the planet, some shed tears.
( Collapse )

From the Southern Poverty Law Center:
Posted By Mark Potok On August 6, 2012 @ 7:29 am In Domestic Terrorism

The man who allegedly murdered six people at a Sikh temple in suburban Milwaukee yesterday, identified in media reports as Wade Michael Page, was a frustrated neo-Nazi who had been the leader of a racist white-power band.

In 2010, Page, then the leader of the band End Apathy, gave an interview [1] to the white supremacist website Label 56. He said that when he started the band in 2005, its name reflected his wish to “figure out how to end people’s apathetic ways” and start “moving forward.” “I was willing to point out some of my faults on how I was holding myself back,” Page said. Later, he added, “The inspiration was based on frustration that we have the potential to accomplish so much more as individuals and a society in whole.” He did not discuss violence in the interview.

Page told the website that he had been a part of the white power music scene since 2000, when he left his native Colorado on a motorcycle. He attended white power concerts in Georgia, North Carolina, West Virginia and Colorado.  At various times, he said, he also played in the hate rock bands Youngland (2001-2003), Celtic Warrior, Radikahl, Max Resist, Intimidation One, Aggressive Force and Blue Eyed Devils. End Apathy, he said, included “Brent” on bass and “Ozzie” on drums; the men were former members of Definite Hate and another band, 13 Knots.

In 2000, the Southern Poverty Law Center has found that Page also attempted to purchase goods from the neo-Nazi National Alliance [2], then America’s most important hate group.

Fox News had one burning question to raise after Gabby Douglas' gold medal performance at the women's gymnastics individual all-around competition in London: how is the athlete showing her patriotism if her uniform lacks stars and stripes?

"You know, Gabby had that great moment, and everyone was so excited, and she's in hot pink -- and that's her prerogative," Camerota said. Webb, who hosts a program on Sirius/XM's "Patriot" channel, wondered, "What's wrong with showing some pride?" He likened the uniform choice to a "kind of soft anti-American feeling that Americans can't show their exceptionalism." Camerota pointed out how other nations, like China, wore nationalistic colors.

Video at the source

Just once, FoxNews couldn't you have resisted the urge to create a faux controversy involving a POC.  I guess at FoxNews nothing says 'post-racial' like picking on the hair styles and clothing (which she did not choose) of an African-American child.

It could be terrorism, but we don’t yet know. It could be someone who has a beef with Sikhs. It’s too early to talk about gun control. These statements ran in a continuous loop through my head yesterday, even when I wasn’t watching coverage of the mass shooting at an active gurdwara in a suburb of Milwaukee. Throughout the day, the hollowness in my solar plexus signaled grief and the tightness in my throat signaled panic, and I felt deep, deep resistance to the notion of saying anything about it. What is there to say that isn’t a cliché?

Details are going to emerge in the coming days, but I already know what they’ll amount to. A white man, in his 40’s, nursing resentment over 9/11 for more than a decade, planned for a long time to kill some “enemies.” The guns will turn out to be legally acquired, or if not, so accessible as to make the law meaningless. The man will turn out to be mad. In the debate, people will argue that the cause is racism…no, it’s gun control…no, it’s mental health. It is impossible for us to navigate the deadly tangle of all three.

The Sikh community has been thrown into high visibility under the saddest possible circumstances. Sikhs are generally of Indian origin, practicing a monotheistic religion in temples called gurdwaras since the 16th century. Sikhism is not a sect of Hinduism or Islam. Sikhs grow their hair as a signal of their devotion to God. The religion emphasizes unity and peace among all people.

I’ve known many Sikhs, though there are only 750,000 in the U.S. I’m often struck by how devout and considerate they are, regardless of age or gender. I have learned a lot by following the Sikh Coalition, as well as United Sikhs and the Sikh Activist Network. Sikhs have been a prime target for racist violence since 9/11, and this is not the first murder of a Sikh by a misinformed, angry white man. Earlier this year, 92 members of Congress pressed the FBI to start counting hate crimes against Sikhs.
( Collapse )
source

I'm not sure how she plans on sending white supremacists in for mental health evals but I do think there would be fewer of them if we worked on poverty, critical thinking, and child welfare.
By Tiffany Hsu

Gay marriage activists are planning to swarm Starbucks on Tuesday in an attempt to counter the record sales from last week’s Chick-fil-A Appreciation Day.

The chicken chain enjoyed a surge of support during the Wednesday event, dreamed up by former presidential candidate Mike Huckabee after Chick-fil-A President Dan Cathy went on the record backing the “biblical definition of the family unit.”

A follow-up protest from Chick-fil-A critics on Friday, which was dubbed Same Sex Kiss Day, was more subdued.

Advocates for lesbian, gay, bisexual and transgender rights are trying again Tuesday with National Marriage Equality Day, initiated by Equally Wed, a lesbian and gay wedding magazine. So far, nearly 28,000 people have signed up to attend.

The event was originally called National Starbucks Appreciation Day in honor of the coffee giant, which recently threw its support behind efforts to make gay marriage legal.

But several other holidays exist with the same name, including one created by gun rights groups. Starbucks’ corporate offices had nothing to do with those events nor with Tuesday’s planned gatherings.

According to Equally Wed, executives at the coffee chain had privately pushed organizers to include other companies that support same-sex unions -- such as Amazon.com and Nike.

“In an effort to heighten awareness for all companies and nonprofits contributing to the fight for marriage equality, we’ve decided to rename August 7 as National Marriage Equality Day,” according a description of the event on Facebook.

The page also lists dozens of other brands in the same camp, including Absolut Vodka, Google, Macy’s and Tiffany & Co.

someone suggested that instead of buying coffee, we spend our money on lgbt organizations. post your ideas for places to donate to in this thread 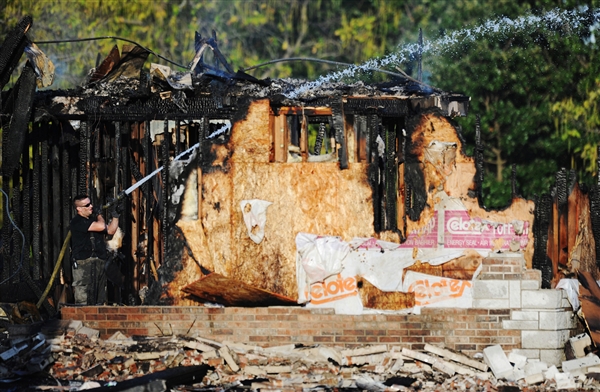 A mosque in southwest Missouri burned to the ground early Monday in the second fire to hit the Islamic center in little more than a month, officials said.

The fire at the Islamic Society of Joplin was reported about 3:30 a.m. Monday, the Jasper County Sheriff's Office said. The sheriff's department said the building was a total loss. No injuries were reported and no charges have been filed.

Imam Lahmuddin, who leads the mosque and was in the building until late Sunday, said he was "sad and shocked" about the fire.

"I'm still in front of the building looking at the damage and nothing can be saved," Lahmuddin said in a telephone interview Monday. "But since we are people of faith we just can remember that this is a thing that happened because God let it happen, and we have to be patient, particularly in the month of Ramadan, control our emotions, our anger."

This piece has more about the community affected:

The only mosque in Joplin, Missouri has burned to the ground. The cause of the fire is still unknown. As KSMU’s Jennifer Davidson reports, the loss of property leaves the Islamic community without a place of worship in its most sacred time of the year:Ramadan.

The imam of the mosque, Dr. Lahmuddin Lahmuddin, had only finished leading the special “Taraweeh” night prayers a few hours before he was awakened by a phone call from the Jasper County Sheriff’s Department. That prayer takes place every night around 10:00 during the month of Ramadan.

I can't believe they have a photo of the asshole who tried to torch the place before, and no one's come forward to identify him. Fucking awful.

New research is underway on the alarming increase in birth defects in the Iraqi city of Fallujah.

In November 2004, the US led an assault on Fallujah - a stronghold of opposition against the US occupation, west of Baghdad. Intense bombardment left many of its buildings destroyed and displaced much of the 300,000-strong population.

Eventually, the US was forced to admit that amongst its arsenal was white phosphorus - a substance the Pentagon described as a 'chemical weapon' when it was used by Saddam Hussein against the Kurds.

In addition, eyewitnesses claimed the US military used "unusual weapons".

Subsequent investigations have focused on the possible use of depleted uranium by the US for its armour-piercing qualities. The US, however, denies using such weaponry.

Research has shown elevated levels of radioactivity in Fallujah and across Iraq.

Iraqi physicians have also long reported a spike in cases involving severe birth defects in Fallujah since 2004. They have reported children born with multiple heads, serious brain damage, missing limbs and with extra fingers and toes.

A report published in 2011 on the level of uranium and other contaminants in hair from the parents of children with congenital anomalies in Fallujah partly concluded that: "Whilst caution must be exercised about ruling out other possibilities, because none of the elements found in excess are reported to cause congenital diseases and cancer except uranium, these findings suggest the enriched uranium exposure is either a primary cause or related to the cause of the congenital anomaly and cancer increases. Questions are thus raised about the characteristics and composition of weapons now being deployed in modern battlefields."

Al Jazeera's Sebastian Walker reporting for the programme Fault Lines examined the legacy of the US occupation in Iraq and described what he saw on a road trip across Iraq after the withdrawal of US troops.

"What we found by visiting the general hospital there is that there are extremely high rates of birth defects, some five times the international norm, and many of the doctors who work in those hospitals believe that this is a direct result of the kind of weapons the US forces were using in those campaigns."

Many researchers say uranium from the shelling may be to blame. However, no conclusive proof of a link has been established.

In this episode Inside Story Americas asks: Is the US being honest about the use of unconventional weapons, and the possible link with the rising incidence of birth defects in Fallujah?

Joining the discussion with presenter Shihab Rattansi are guests: Ross Caputi, a former US marine who fought in the battle for Fallujah in November 2004 and co-founder of the Justice for Fallujah Project; Dai Williams, a weapons researcher whose work focuses on community health in conflict zones associated with new types of weapons; and Raed Jarrar, an Iraq analyst and the executive director for a Washington-based global strategy firm.