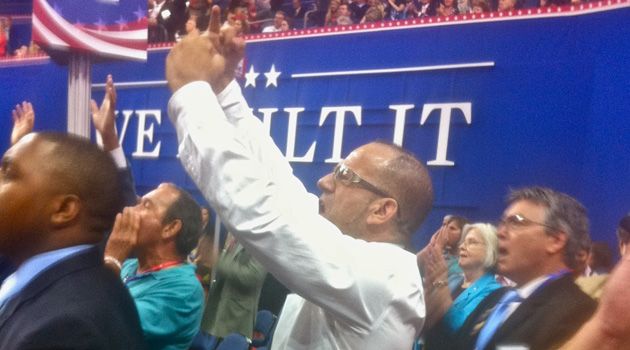 A minor revolt broke out on the floor of the Republican Party's presidential convention Tuesday afternoon and evening. Ron Paul delegates from several states erupted into protest over a controversial change to the party's rules to block future insurgencies mounted by outside candidates like their hero. Paul supporters also freaked out over the convention's refusal to recognize about two dozen Paul delegates and for refusing to treat Paul like a serious candidate for the nomination.

During the roll call of the states, the Paulites were irate, screaming at the podium, as convention secretary Kim Reynolds declined to read out the delegate votes for any candidate other than Romney. "The Republican Party is so afraid of Ron Paul that they won't repeat his name," shouted Jim Ayala, a Nevada delegate and Paul supporter wearing an Oath Keepers t-shirt.

Minutes earlier, the Paulites were enraged when the convention adopted the new set of rules on a voice vote during which the Paul backers out-shouted the other delegates. One Nevada delegate and Paul supporter, Mark Carducci, thrust two middle fingers into the air toward RNC Chairman Reince Priebus and House Speaker John Boehner (R-Ohio), screaming "Fuck you, tyrants!" (That's him in the above picture.)
( Collapse )

Police investigating claims by Vietnamese textile workers that they were being kept in slave-like conditions at a factory near Moscow have decided not to bring criminal charges against the owners of the factory.

The investigation follows a BBC report which found evidence that the illegal immigrants were being regularly beaten and forbidden to leave the factory premises.

The factory owners will have to pay an administrative fine.

The BBC has found disturbing evidence of Vietnamese textile workers being kept in slave-like conditions at a Vietnamese-run factory in Russia.

Staff at Vinastar, a medium-sized business in the village of Savino south-east of Moscow, said they were being forced to work up to 18 hours a day, seven days a week.

They said they were poorly fed, beaten up regularly and forbidden to leave the factory premises.

"I have been working here for 18 months," said one of the factory workers, Nguyen Thi Bich Tuyen.

"I'm barely paid enough to afford two meals a day - a bowl of rice and some bread. We are often beaten up. Not so long ago, 20 people were beaten up."

By the time the BBC visited the factory last week, production had stopped but factory workers told us security guards were not allowing them to leave.

We found 75 people sharing four small rooms, two of which did not even have windows.

None of the rooms had electricity. Workers told us wall sockets had been removed to prevent them charging up a mobile phone.

Vietnamese migrants showed us red rashes on their bodies - caused, they said, by the fact that they had been unable to take a shower for at least two months. They also told us they were not allowed to use more than five litres of water per 25 people per week for brushing their teeth and for personal hygiene.

"I came here because I was promised good money," one worker, Duong Thi Thu Lam, complained. "Instead, I was locked up. We were not allowed outside."

"In the summer, sometimes they let us walk around in the backyard so that we could hang up our clothes to dry. But in winter, we had to stay indoors all day."

I recently joined The Root and launched a blog + column called "Elongated Thoughts" Please swing by and check it out and share it! (I gotta make sure there's traffic or there wont be a blog + column  for long! ;-) )  But today I weighed in on RNC's night 1 headliner Chris Christie. I call shananigens...

(The Root) -- With the first night of the Republican National Convention wrapped, pundits and news anchors are in a frenzy trying to give reviews and decipher what it all means. The night's biggest star, New Jersey Governor Chris Christie, has garnered mixed reviews -- but all say he delivered his speech well.

Politico put together 10 rousing quotes from Christie's speech. The only problem: It didn't acknowledge whether they were true or not. It gave his quotes but not the reality that they're supposed to be talking about.

German industrial metallers Rammstein have been implicated in a recent high-school shooting in Baltimore by the New York Daily News, who revealed that the perpetrator was a fan of the band.

Bobby Gladden, who is 15 years old, has been arrested and charged with attempted first-degree murder and first-degree assault for critically wounding a classmate with a gun blast on Tuesday (August 28). He is currently being held on remand.

According to a report in the paper, Gladden is described as "a misfit obsessed with a German metal band and the murderous Charles Manson Family." They researched the information from the teenager's Facebook page, which featured a picture of Rammstein singer Till Lindemann.

OP: When all else fails, blame the German industrial metallers. If he had a picture of Olivia Newton-John on his Facebook account would they have blamed her?

SO THE RNC STUFF DOES NOT START UNTIL 7PM, SO I AM HIJACKING THIS POST FOR RIGHT NOW BECAUSE PRESIDENT OBAMA IS DOING AN AMA ON REDDIT. THIS IS LEGIT. STARTING RIGHT NOW, 4:30PM. 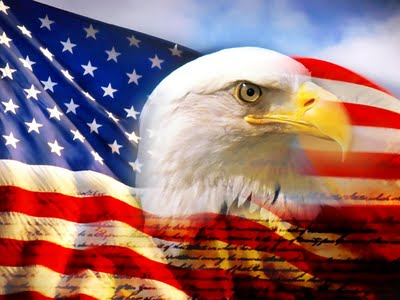 
FULL SCHEDULE
ANN ARBOR – Sticks and stones may break your bones, but a new University of Michigan study shows words can wound for life.

The study found the commonly used phrase “that’s so gay” to describe something undesirable can have negative consequences for gay, lesbian or bisexual students.

Although subtle, such language is hostile, and can be harmful to sexual minorities, said study author Michael Woodford, an assistant professor of social work at U-M.

The findings appear in the current issue of the Journal of American College Health.

Researchers examined the impact of hearing “that’s so gay” among 114 gay, lesbian and bisexual students between the ages of 18 to 25 through an online survey.

Students reported how often they heard the phrase on campus in the past 12 months. They also answered questions about their perceived social acceptance on campus, physical well-being, mental health and willingness to disclose their sexual orientation.

Practically every respondent reported hearing “that’s so gay” on campus at least once in the past 12 months. Nearly half of the students said they’ve heard the phrase more than 10 times within the year. Only 14 respondents—or 13 percent—hadn’t heard it at all.( Collapse ) 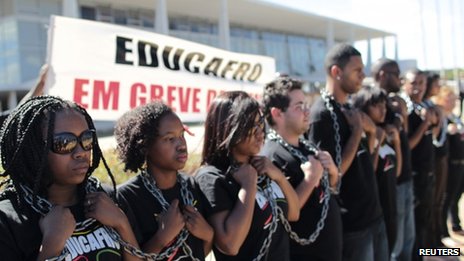 The Brazilian Senate has approved a bill that reserves half the places in the country's prestigious federal universities to state school students.

African-Brazilian Senator Paulo Paim said most Brazilians would benefit as only 10% of students graduated from private schools.

President Dilma Rousseff is now expected to sign the bill into law.

But the measure has attracted criticism, as it also sets up quotas based on racial background.

The reserved spots will be distributed among black, mixed race and indigenous students according to the racial make-up of each Brazilian state.

The racial quotas will be discontinued in 10 years.

Brazil has the biggest black population anywhere outside of Nigeria, but private schools are still predominantly white.

Private school students are usually better prepared than pupils from the public school system for the tough university entry exams.

They get most of the places in federal universities, which paradoxically are heavily subsidised and virtually free of charge.

President Dilma sanctioned the law today and I'm only posting because the South America and Latin America tags looked like they could benefit from some action.

Nils Pickert's five-year-old son likes to wear dresses, and given how closed-minded people can be, Nils wanted to make sure that he grows up with a strong, positive role model. So he did what any mind-bogglingly incredible dad would do: he started wearing skirts himself.

Gov. Mitt Romney's campaign toasted its top donors Wednesday aboard a 150-foot yacht flying the flag of the Cayman Islands.

The floating party, hosted by a Florida developer on his yacht "Cracker Bay," was one of a dozen exclusive events meant to nurture those who have raised more than $1 million for Romney's bid.

"I think it's ironic they do this aboard a yacht that doesn't even pay its taxes," said a woman who lives aboard a much smaller boat moored at the St. Petersburg Municipal Marina.