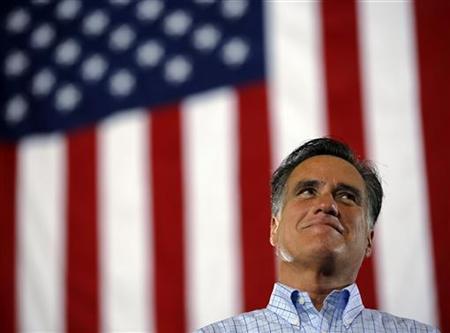 After dishing out a healthy helping of political red meat during a speech in Virginia Beach, GOP presidential nominee Mitt Romney doled out some hot dogs at Richmond International Raceway on Saturday night.

Following an early afternoon campaign stop at the Virginia Aviation Museum in Virginia Beach, Romney flew to Richmond, stopping by the Federated Auto Parts 400 at RIR, arriving just as rain started to come down.

Romney's motorcade rolled through the infield tunnel and dropped him off at a tent in the garage, where he joined Republican U.S. Senate candidate George Allen and began handing out hot dogs to fans.

"Awesome. Speechless. I'll never wash my hand," said an excited Jennifer Carden of Prince George County, who shook hands with Romney and accepted a hot dog. "We just wished him good luck and told him that we would pray that he wins."

BirtherFest 2012: The Greatest, Bestest Show God has Ever Given to America on the Face of the Earth: Cancelled.*

The cancelled Phoenix Tea Party Patriots' September 22 event wasn't actually called BirtherFest. It was a "Cold Case Posse Event" billed as "an exciting time as the Greater Phoenix Tea Party and Surprise Tea Party present an event to support Sheriff Joe and his investigation into the fraudulent Obama documents."

Sharing star billing: Sheriff Joe Arpaio; LTC Terry Lakin (a birther doctor who refused to deploy to Afghanistan because he doesn't believe Obama was born in the U.S.); and Pat Boone.
( Collapse )


‘We Built This,’ But Nobody Came; Anti-DNC Concert Moved To Pumpkin Patch (VIDEO)

Rock The Red is a perfect metaphor for the Tea Party mentality. A concert conceived out of spite, with a misleading title, by people who have blamed their failure on the government, rather than their own poor business acumen. They set themselves up (with the government, naturally), as a non-profit. And of course, they’re not providing what they promised.

The event, billed as a “a rally for people with conservative values,” was being held in the 11,000 seat Bojangles Coliseum, named for a chicken franchise in Charlotte, NC, the host city of the Democratic National Convention. The idea behind the event originally was as a raspberry in the face of the President in every way, right down to the billboards promoting the event (shown above). So should Obama worry that ‘Rock The Red’ is going to wreck his big party? Let’s take a look at what’s gone wrong.

As December 21, 2012 approaches, many people may be asking themselves “how will I survive the zombie apocalypse?”

Well, the government may have the answers.

Welcome to Hell: Philadelphia Has a Serious Case of Post-Traumatic Stress Disorder

Norris Square is both lovely and out of place—a park interrupting trash-strewn streets and dirty concrete with a sudden surprising burst of green. Elegant decaying townhomes surround the square and convey the neighborhood’s history—its prosperous origins and decades spent waiting for rescue.

Momentum generated by new construction and an influx of new residents in nearby Northern Liberties and Fishtown s­uggest that Norris Square, which sits just 3.5 miles from City Hall, might be reborn. And by all the principles of urban development, it should be—the homes restored, the park filled with families slurping ice cream, young couples picnicking, musicians strumming guitars. But something is wrong.

There’s a toxic quality to the surrounding streets, made real by the boys on the corners, bristling and edgy, who serve up dope and other drugs to the customers streaming in from wealthier neighborhoods on the nearby El trains. And then there are the incidents that attend these boys, like sparks trailing a fire.

I'm not bolding anything because I think the entire thing is worth reading - and while Philly is the point of the article (and a drastic one), this could apply to many more cities. 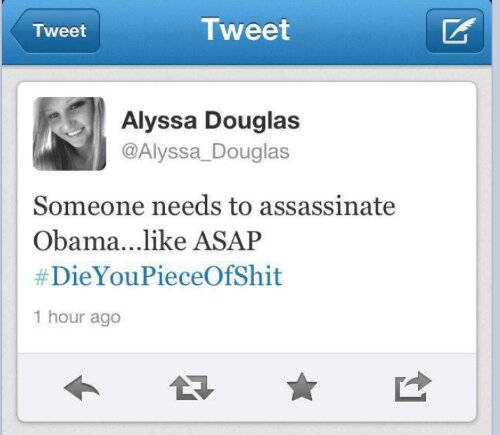 Here's how to get into trouble in 140 characters or fewer:

Alyssa Douglas, a high school girl from the Clarksville, Ohio, area, about 40 miles northeast of Cincinnati, appears to have sent out a tweet Thursday night, hours before President Barack Obama's convention speech, saying: "Someone needs to assassinate Obama ... like ASAP."

The Secret Service is investigating the posting on Twitter as a potential threat and will report its findings to the U.S. Attorney's Office for the Southern District of Ohio.

Clinton-Massie School District officials had a meeting with Douglas and her parents Friday morning.

Perhaps it was a real threat. If that was the case, the legal consequences would likely be dire.

Or perhaps it was simply the unconsidered words of a teenager with easy access to social media. If that was the case, the consequences may still be significant.

**I think it was here that I first heard about this (not just the case, but dogs in courtrooms in general) several years ago, so I thought I'd post the follow up. I'm having problems posting pictures to LJ. Can't tell if it's me or if it's LJ. My apologies for the wall o' text and no awesome dog pics!**

Yesterday, the Courthouse News Service reported that the Washington Court of Appeals ruled that, a man charged with burglary was not deprived of a fair trial when a judge let a dog sit next to the developmentally disabled victim when he testified. 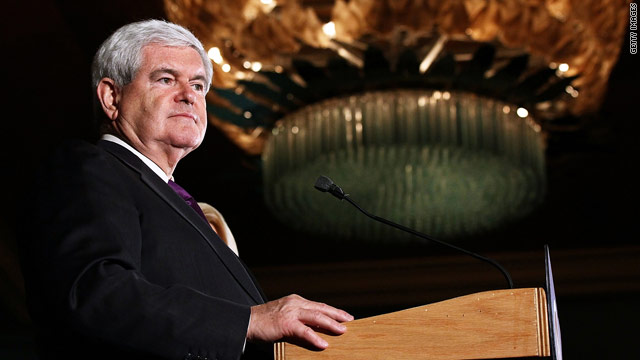 “You can take his speech, spin it not very much, and it's actually a condemnation of the fact that Obama learned nothing ... out of the 2010 election,” Gingrich said on CNN’s “State of the Union.”

SUNDAY, SEP 9, 2012 03:20 PM EDT
The GOP nominee immerses David Gregory in a lukewarm bath of platitudes, a couple of lies and a splash of news
BY JOAN WALSH

With a “Juntos con Romney” placard placed strategically behind him, the presidential candidate currently attracting 26 percent support from Latinos told David Gregory he’s fighting for “the middle class that have been crushed under this president.” But he stumbled when asked if he ever spent time with the unemployed, telling Gregory “Well– actually– just– last night it was. I was with– a person who is facing some challenges.” He was then unable to describe those challenges.

Source is playing its tiniest violin for you two

Small town Mayor Mia Love (R-UT), a GOP congressional candidate who received a speaking slot at the Republican National Convention in Tampa, is considered a rising star by many within her party. Yet she offered a defense of the Republican Party’s plans to roll back reproductive freedom on Fox News Sunday today that takes a significant amount of liberty with the English language. In a discussion about the GOP’s plan to make abortion illegal, defund Planned Parenthood and enable employers to restrict their employees’ access to birth control, Love suggested these policies will lead to “more free choice and more liberties” for women. Watch it:

Love also claimed that GOP policies will let her “keep a little bit of my own money so I can pay for my own contraceptives if I want to,” but that’s only true if Love is very wealthy. Even under the most generous reading of the Romney/Ryan tax plan, middle class families would experience a tax increase of up to $2000. 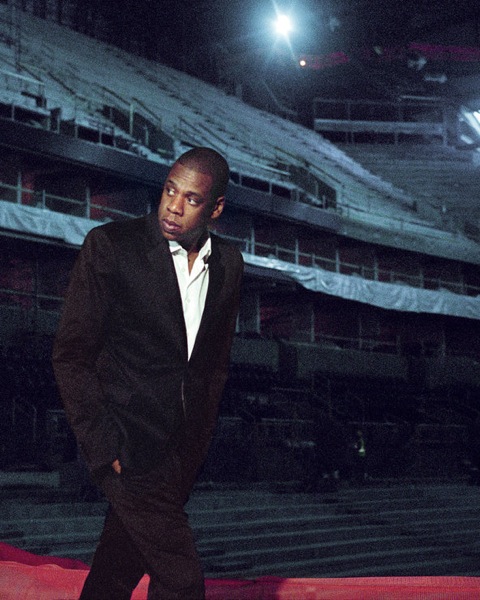 It’s difficult to know what to ask a rapper. It’s not unlike the difficulty (I imagine) of being a rapper. Whatever you say must be considered from at least three angles, and it’s an awkward triangulation. In one corner you have your hard-core hip-hop heads; the type for whom the true Jay-Z will forever be that gifted 25-year-old with rapid-fire flow, trading verses with the visionary teenager Big L — “I’m so ahead of my time, my parents haven’t met yet!” — on a “rare” (easily dug up on YouTube) seven-minute freestyle from 1995. Meanwhile, over here stands the pop-rap fan. She loves the Jiggaman with his passion for the Empire State Building and bold claims to “Run This Town.” Finally, in the crowded third corner, stand the many people who feel rap is not music at all but rather a form of social problem. They have only one question to ask a rapper, and it concerns his choice of vocabulary. (Years pass. The question never changes.) How to speak to these audiences simultaneously? Anyway: I’m at a little table in a homey Italian restaurant on Mulberry Street waiting for Mr. Shawn Carter, who has perfected the art of triangulation. It’s where he likes to eat his chicken parms.

source. submitted because, while it may be more along the "ontd" lines, there's a lot here about race and success in america that i think is really well stated. i tried to bold the most overtly political sections, but it's all well worth a read.
Possible trigger warning for "aborted fetus" photos and anti-choice rhetoric

It has become one of the most vicious, important and divisive battlegrounds in the 2012 US presidential election.

Since it was legalised in 1973, the issue of abortion has polarised the US, but now the battle has been taken to a new level.

"What is abortion? Fundamentally it's the killing of an innocent child. If you can't get the life of an unborn baby right, I can't trust you with my taxes, education or anything else."

Last year, an unprecedented number of laws have been passed across the US, all aimed at restricting abortion or reproductive rights.

But the fight goes far beyond the medical procedure, with Republican politicians even attacking the Obama administration for making contraception more readily available.

The US has seen more anti-abortion violence than any other country in the world. Since 1993, at least eight abortion providers, including four doctors have been killed. And there have been over 200 arsons and bombings against reproductive healthcare clinics since 1977.

Why is a medical procedure being reframed as a deeply divisive moral issue in the US?

Fault Lines travels to California to meet the next generation of frontline troops fighting to ban abortion, and to Ohio and Tennessee to investigate what lies behind the so-called war on women.

"It [Ohio's heartbeat bill] really only sees a woman as a carrier and she has no other right beyond her ability to reproduce. One of the reasons that these abortion bills are so dangerous is because it chips away at the notion of personal liberty, your right. And what can be more fundamental to your personal liberty than being able to control your own body ....

Women died trying to get back-alley abortions. Do we want to get back to that in the land of opportunities, the land of freedom? When did it become a sin and a shame to be a woman in this country? But that is what is happening in the 21st century in many states across this country and also in our congress and it's just absolutely shameful to me."

The video is about 25 minutes long and infuriating at points, but well worth the watch. I had no idea that CPC's (anti-choice organizations basically) are federally funded and unregulated. There's a part, I'd say about half way through, where the interviewer asks a Ohio legislator why some women have abortions and he's utterly stumped, yet he sponsored the heartbeat bill.

AUSTRALIAN troops are flying into battle perched on eskies in ageing helicopters with a computer glitch that makes the aircraft violently stand on their nose - a flaw already blamed for killing one Digger and injuring five others.