On June 30, 2011, an enthusiastic Mitt Romney arrived here in the heart of the Lehigh Valley determined to make Pennsylvania a presidential battleground state.

Standing before the closed Allentown Metal Works, Romney told reporters: “The president is a nice guy and I know he’s trying, but he doesn’t understand how the economy works” — a line that Romney later observed had resonated with focus groups.

A key assumption underpinned Romney’s appearance in Allentown — that the working class whites who once dominated this great industrial center would back the Republican nominee.

Pennsylvania demographics suggested that the state was fair game for Republicans. Seniors are a key source of support for Romney, and the state has a higher percentage of voters over the age of 65, 15.6 percent, than the country as a whole (13.3 percent). Pennsylvania is substantially whiter, at 79.2 percent, than the rest of the nation (63.4 percent). And unemployment in Pennsylvania matches the national rate at 8.1 percent.

Both the Obama and Romney campaigns made significant investments in advertising in Pennsylvania. The pro-Romney super PAC, Restore Our Future, and two conservative PACs, Crossroads GPS and Americans For Prosperity, have together spent a total of $9.7 million; the Obama campaign and its allied super PAC, Priorities USA Action, have spent $8 million.

By the end of August, however, ad buying stopped. The Romney campaign effectively conceded the state.

In yielding Pennsylvania to President Obama, Romney has raised the stakes in Ohio and Florida, almost certainly making both states must win contests if he is to reach 270 Electoral College votes. Real Clear Politics has Obama ahead by a 1.9 point average in the eight most recent Florida polls and by an average of 4.1 percent in the seven most recent Ohio polls.( Collapse )

Source
Long, but interesting article on why PA is not competitive for the GOP in 2012.  Also includes some SPECTACULAR quotes from GOP politicians that pretty much come out and say that it's all the fault of hispanics and african-americans.  With attitudes like that, it's NO WONDER POC aren't lining up to vote GOP.

DENVER - Mitt Romney today accused President Obama of "trying to fool" voters into thinking Romney believes in things he does not, telling reporters aboard his campaign plane that Obama is running on talking points he knows are "wrong."

"The president will not be able to continue to mischaracterize my pathway," said Romney, in answering a question about the importance of the upcoming debates. "I'll continue to describe mine, he will describe his, and people will make a choice. That's the great thing about democracy.

Romney's press conference came after a rough week for the candidate, and is the first sign of an attempt by the candidate to turn around the campaign, which is set to make stops in the battleground states of Colorado, Ohio and Virginia before the week's end.

It's too easy to add notes and MST3K this...just read for yourself and add your own laugh track

The Sun newspaper should be made to axe its pictures of topless models on Page 3 because it can lead to domestic violence, the minister responsible for women's rights worldwide tells The Independent on Sunday today.

Lynne Featherstone, the international development minister, said she would sign a petition to ban Page 3 because it had a "deleterious effect" on women.

Mrs Featherstone said she had experienced verbal abuse for her views on women's rights when she was equalities minister until this month. Mr Cameron has appointed her as "ministerial champion" to tackle violence against women across the world.

OP: Page Three has always been more Carry On than anything sinister. If you don't like it, here's the thing...don't buy the paper. I don't like The Sun. But I don't think its the job of government to whip up things like this.

Besides, the two biggest tits I've seen are always on the front page, not on page three. Cameron and Clegg.

WASHINGTON -- Downplaying the need for the government to ensure that every person has health insurance, Mitt Romney on Sunday suggested that emergency room care suffices as a substitute for the uninsured.

"Well, we do provide care for people who don't have insurance," he said in an interview with Scott Pelley of CBS's "60 Minutes" that aired Sunday night. "If someone has a heart attack, they don't sit in their apartment and die. We pick them up in an ambulance, and take them to the hospital, and give them care. And different states have different ways of providing for that care."

This constitutes a dramatic reversal in position for Romney, who passed a universal health care law in Massachusetts, in part, to eliminate the costs incurred when the uninsured show up in emergency rooms for care. Indeed, in both his book and in high-profile interviews during the campaign, Romney has touted his achievement in stamping out these inefficiencies while arguing that the same thing should be done at the national level.( Collapse )

"The party of voter ID laws may need to clean up their own house first when it comes to election fraud."

It turns out that the Republican Party’s obsession with voter fraud may be yet another case of projection. Four former staffers for resigned House Rep. Thaddeus McCotter have been charged with 36 counts of misdemeanor and felony election fraud. Yesterday one of those staffers, Lorianne O’Brady, pled not guilty to five misdemeanor counts of submitting fraudulent signatures on a ballot petition. O’Brady is the last of the four staffers to be arraigned; the other three, Don Yowchuang, Mary Melissa Turnbull, and Paul Seewald, were arraigned on similar charges on August 10th.

Armando is a diesel mechanic who lives in a community known as Vila Autodromo, so named because it sits right outside the city's famed Formula 1 racetrack. Armando built his home from scratch over the course of 15 years. Now it's two stories high with plumbing, electricity, and his own sweat and handiwork in every square inch.

The fixtures, the tile, even the wire to a lamp stretched tightly so it hangs behind a framed picture of his son and gorgeous twin grandchildren, bear the marks of toil and love.

His home has also been targeted for demolition by the city government of Rio for the good of the next Summer Olympic Games. 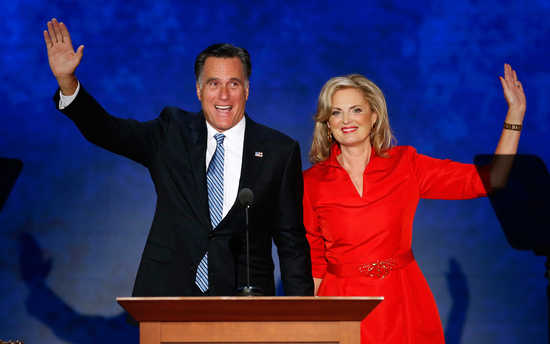 On Monday, Mitt Romney offered a remedy to the problem that caused his wife’s airplane to land prematurely last week: Allow passengers to roll down the airplane windows.

Ann Romney’s plane was grounded Friday after the main cabin filled with smoke. The small electrical fire caused no injuries, but apparently did cause the Presidential candidate to forget the dangers of altitude.

“When you have a fire in an aircraft, there’s no place to go, exactly,” he told the LA Times. “And you can’t find any oxygen from outside the aircraft to get in the aircraft, because the windows don’t open. I don’t know why they don’t do that. It’s a real problem.”

Air crafts do not open windows because the cabins are pressurized to fly safely at an altitude of tens of thousand feet. Opening a window in an airplane would seriously sicken the passengers and crew.

“I appreciate the fact that she is on the ground, safe and sound. And I don’t think she knows just how worried some of us were,” Romney said. “When you have a fire in an aircraft, there’s no place to go, exactly, there’s no — and you can’t find any oxygen from outside the aircraft to get in the aircraft, because the windows don’t open. I don’t know why they don’t do that. It’s a real problem. So it’s very dangerous. And she was choking and rubbing her eyes. Fortunately, there was enough oxygen for the pilot and copilot to make a safe landing in Denver. But she’s safe and sound.”

Following the big Mother Jones release of Republican presidential candidate Mitt Romney's hidden-camera comment on the "47 percent" of Americans "who will vote for the president no matter what," my colleague at The Atlantic, David Graham, posted an article Monday looking at the real "47 percent." Using the Tax Foundation's data on 2008's income tax non-payers (people who filed a tax return but did not actually owe federal income taxes), he found that the states with the highest rates tended to be traditionally Republican states. Graham writes:

Romney's statements are a little unclear, but it appears that the 47 percent figure represents all of those who pay no income tax, rather than the Democratic base. His problem is that those people are disproportionately in red states -- that is, states that tend to vote Republican...One important note about these numbers: This measures only those Americans who filed for taxes with no liability. Millions more didn't even file; it's those millions, added to the estimated 52 million here, who combine to make that 47 percent.

source (first post, lemme know if I need to change anything!)

Comedian Bill Maher puts himself in the company of “9/11 liberals” who believe that Islam as a religion is different and decidedly worse than all other religions. He said Friday that ‘at least half of all Muslims believe it is all right to kill someone who insults ‘the Prophet.’ His bad faith is immediately apparent in the reference to 9/11, not the work of mainstream Muslims but of a political cult whose members often spent their time in strip clubs.

Now, it may be objected that Maher has made a career of attacking all religions, and promoting irreverence toward them. So Islam is just one more target for him. But that tack wouldn’t entirely be true. He explicitly singles Islam out as more, much more homocidal than the other religions. He is personally unpleasant to his Muslim guests, such as Keith Ellison. His reaction to the youth of the Arab Spring gathering to try to overthrow their American-backed dictators was “the Arabs are revolting.” Try substituting “Jews” to see how objectionable that is.

The Milwaukee County medical examiner's office has revised its ruling on the death of Derek Williams, who died in Milwaukee police custody in July 2011, from natural to homicide, according to the district attorney's office.

U.S. Attorney James Santelle said Monday he is considering ordering a federal investigation into the death of Derek Williams, who died in Milwaukee police custody in July 2011.

Separately, Santelle also is considering authorizing a more sweeping investigation into a possible pattern of civil rights abuses by the Milwaukee Police Department.


I put a trigger warning tag because the first link has a video that is 56 minutes long and gives a warning that only people over 18 should watch. Also putting the racism tag on because Derek Williams was Black and from what I can tell, a lot of the officers involved were White.

Just became aware of this today. There really needs to be changes in the Milwaukee Police Department because there is just waaaaay too much abuse of power going on there. Here's hoping something comes out of the DA reopening the investigation and a potential FBI investigation.
Collapse