Republican Texas homeowner Bud Johnson has a "lynched" empty chair on display in his front yard in what is likely a display of opposition to President Barack Obama.

Saw this in my Sociology of Race class today, and even though it's a week old, thought it would be good to share. The man has since taken down the chair.

(Reuters) - University of California officials have agreed to pay $1 million to settle a lawsuit over a pepper-spraying incident last year that came to symbolize law enforcement aggression against anti-Wall Street protesters, attorneys said on Wednesday.

Video of the confrontation, which showed seated student protesters being pepper-sprayed by campus police at the University of California campus at Davis, was replayed widely on television and the Internet, sparking outrage among faculty and activists.

Under the terms of the settlement filed in court on Wednesday, each of the 21 students and recent graduates from the campus who sued University of California regents over the November 2011 incident will get $30,000 and a personal letter of apology from UC Davis Chancellor Linda Katehi.

"Lee later told a crowd at a press conference on the UC Davis campus that he would use his settlement money to pay for tuition, and that others were planning to do the same."
The school gave the students money only to get it back. The fucking irony. Schools should not be drowning us in debt like this, honestly.

Canada’s minister for the status of women joined nine other Conservative cabinet ministers and dozens of backbenchers in voting in favour of a motion to study the rights of the fetus, even as the Prime Minister’s Office suggested it is time to move on.

Conservative MP Stephen Woodworth’s motion to have a committee look at when human life begins was defeated 203-91 in a vote on Wednesday night.

Minister for the Status of Women, my ponderous pudendum.

By Garance Franke-Ruta, The Atlantic

Presidential elections are decided in the first-person plural and the second person. Anyone operating in the third person is in trouble.

Mitt Romney's campaign on Wednesday released an ad featuring the candidate speaking straight to the camera, all by himself:

MTE. That ad alone is just as telling as all the gaffes.

California Gov. Jerry Brown has signed a pair of privacy bills making it illegal for employers and colleges to demand access to social media accounts.

Brown announced on Thursday that he signed AB1844 by Assemblywoman Nora Torres. The bill prohibits employers from demanding user names and passwords from employees and job applicants.

The restriction does not apply to passwords or information used on employer-issued electronic devices.

The governor also signed SB1349 by Sen. Leland Yee. The companion bill makes it illegal for colleges and universities to demand social media user names and passwords from students and prospective students.

Brown says the legislation will protect Californians from "unwarranted invasions."

rock on, Mr. Governor sir. now i'd like to see this go national. 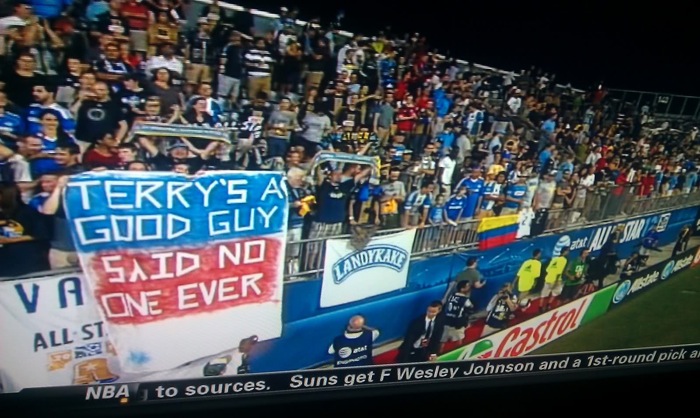 John Terry is considering an appeal after the FA's disciplinary hearing found him guilty of "using abusive language" towards QPR's Anton Ferdinand last October which "included a reference to colour and/or race".

The independent regulatory commission delivered its verdict on Thursday after a four-day hearing, ruling that Terry must serve a four-game ban and pay a fine of £220,000.

Terry, who was cleared of a racially aggravated public order offence at Westminster magistrates court in July over the same incident, categorically denied the FA charge, and has the right to appeal the ruling within 14 days.

It has been more than two weeks since the Sept. 11 attack on the U.S. diplomatic facility in Benghazi, Libya, that resulted in the death of U.S. Ambassador Christopher Stevens and three other Americans, yet the attack remains front-page news. One reason is that it has become unusual for a U.S. ambassador to be killed. After the 1968 assassination of John Mein in Guatemala -- the first ever U.S. ambassador to be assassinated -- several others were killed in the 1970s: Cleo Noel Jr. in Sudan in 1973, Rodger Davies in Cyprus in 1974, Francis Meloy Jr. in Lebanon in 1976 and Adolph Dubs in Afghanistan in 1979. However, following improvements in diplomatic security during the 1980s, no U.S. ambassador has died as a result of a hostile action since Ambassador Arnold Raphel, who was killed in the plane crash used to assassinate Pakistani President Muhammad Zia-ul-Haq in August 1988.

Another reason for the continued publicity is that it is an election year. Since foreign policy is an area where Republicans believe President Barack Obama is vulnerable, Stevens' death has become highly politicized. In any event, the Benghazi attack remains in the headlines. Unfortunately, as one goes beyond those headlines, there are many misunderstandings that have persisted in both the media coverage and the public discussions of the incident. There simply are not many people who understand how diplomatic facilities work and how they are protected.

With that in mind, and because other U.S. diplomatic facilities remain in harm's way due to the protests occurring throughout the Muslim world, it is an opportune time to again discuss diplomatic security.

Normally, I'd never submit something from a source called "Right Side News", but this is the most sensible, non-partisan and cogent discussion of how embassy security actually works in the real world and why it sometimes doesn't in places like Benghazi that I have read anywhere in the print media.

tbh, as a new yorker, i'll probably vote for jill stein. but this video is hilarious and awesome. it's beeped through, so in theory, one could listen to this at work. maybe.

About 4.3 million jobs were lost in Obama's first year, but new data released Thursday show about 4.4 million jobs have been added back since then.

In the year following Obama's inauguration, the U.S. economy lost about 4.3 million jobs. But new figures released Thursday show 4.4 million jobs have been added back since then. ( Collapse )

The filmmaker of the controversial video that sparked protests across the Muslim world has been arrested in Los Angeles.

Nakoula Besseley Nakoula is in custody and is scheduled to make a court appearance in a federal court in Los Angeles.

The 55-year-old has been under investigation for violating probation terms after he was released from prison in 2011 for bank fraud.

Court records say he was banned from accessing the internet or using an alias without an officer's permission.

I personally picked the shortest article I can find I want everyone to read this and know what he was exactly arrested for.
After Kelvin McKenzie demanded an apology from South Yorkshire Police for giving him an excuse to act like a complete prick after the Hillsborough disaster, everyone told him that apparently these days apologies take 23 years.

Former editor of The Sun, McKenzie insisted that he is owed an apology because he only ever ran sensationalist lies when people gave him the slighted excuse to do so.

He told reporters, “I am a journalist – stop laughing, I am – and it was my job to report our opinions which we felt would sell the most newspapers to people who didn’t flick straight to page 3.”

“South Yorkshire police are entirely to blame for providing me with the tools to turn The Sun into a disgusting rag that scousers wouldn’t even wipe their arses on.”

“I am as much a victim as the 96 who died, if not more so because I’ve had to live with the front page I defended for twenty years. I think you should all start referring to me as the 97th victim.”

Experts in media relations have spoken about McKenzie’s demand for an apology, insisting it shows just how massive his bollocks actually are.

Analyst Simon Williams told us, “He must struggle to find trousers, such are the balls on this guy.”

“It takes knackers of immense proportions to run such a Hillsborough story in the first place, but then to insist you only did it because of South Yorkshire Police makes them positively gargantuan.”

“But if he really wants an apology, I strongly suggest he goes back to his time as editor and starts apologising for endless stream of bullshit he published day after day, year after tear.”