A glance at history suggests it's easier for a Chinese woman to orbit Earth than to land a spot on the highest rung of Chinese politics.

In June, a 33-year-old air force major marked a major feminist milestone by becoming the first Chinese woman to travel in space. With a once-a-decade leadership transition set to kick off Nov. 8, many now are waiting to see if another ambitious Chinese female, State Councilor Liu Yandong, can win one of the nine spots at the apex of Chinese power.

Liu is a smiley 67-year-old with a degree in chemical engineering and a penchant for pearls and red lipstick. Her portfolios include education, sports and cultural affairs. Experts say she is well-connected and state media paints her as a diligent civil servant with a human touch. In May, she donned scrubs and stroked the forehead of a hospitalized teacher who lost her legs pushing two students away from an oncoming bus.

"You are so young, so beautiful," state media quoted Liu as telling the teacher, Zhang Lili. "From now on, you can call me big sister."

Leadership transitions only happen once a decade in China. This year, Liu is the only female with an outside chance of landing a position at the top, and if she does, she will have made history. But rocketing into space seems simple compared to busting into the boys' club of Chinese politics.

The president of Gallaudet University said Tuesday that the chief diversity officer who was put on administrative leave after signing an anti-gay marriage petition is welcome to eventually return to her position.

But an attorney representing Angela McCaskill said that would likely only happen if the university compensates McCaskill for the emotional distress she endured, along with the damage to her reputation. There are also calls for university trustees to examine the situation.

I have a lot of ties to the Deaf community in the DC area and it infuriates me that people are supporting this woman's right to be a bigot which is completely antithesis to her job title.

You've probably heard by now that an outbreak of fungal meningitis caused by contaminated steroid injections has killed 15 people and sickened 214 more. The contaminated steroid—injected into the spine as a routine treatment for back pain—originated at the New England Compounding Center (NECC) in Massachusetts.

The deadly outbreak has also exposed lax oversight of compounding pharmacies, which fall into the hazy area between federal and state laws. Lawmakers are now calling for tougher regulation of these facilities that mix and distribute drugs. Past attempts at regulation have been stymied by lobbying and opposition from the compounding pharmacy industry.
( Collapse )

There has been Jasmine and Belle, Mulan and Pocahontas, but never before has there been a Latina Disney princess.

Disney is about five weeks away from the introduction of Princess Sofia, who will make her debut on the Disney Channel on Nov. 18 in TV movie Sofia the First: Once Upon a Princess, ahead of a 2013 TV series on both Disney Channel and Disney Junior. The TV movie and the show are geared toward viewers age 2-7.

Some may say that Sofia doesn’t look very Latina and others might say Hispanics come in all shades, but Disney says she is.

. . . . . . It's not even a movie. And pfffff "we never actually call it out" [that she's latina] and she looks/pass for white? Yeah, good job on representing latin americans!

The East Aurora, Illinois School Board did an admirable thing this week when it unanimously passed a policy affirming transgender students by recognizing their identities. The Illinois Family Institute provided its unsurprising and unwelcome rebuke, calling trans students “disordered” and “perverse,” and it seems the hate group’s response may have stuck. Yesterday, the Board announced it will hold a “special meeting” on Friday to “review,” and possibly rescind, the policy. According to Board President Annette Johnson, the Board assumed the policy was a recommendation from the the Illinois State Board of Education, as opposed to a progressive policy brought forth from a Board member:

JOHNSON: The board never at any time came up with this (policy) on their own… It’s something we (board members) would not have questioned in light of the attorney and the administrators bringing it forward. [...] This was just a policy the board felt they needed to keep up-to-date with.

The court’s language in defense of same-sex marriage was inspiring, but its reasoning could doom it before the high court. 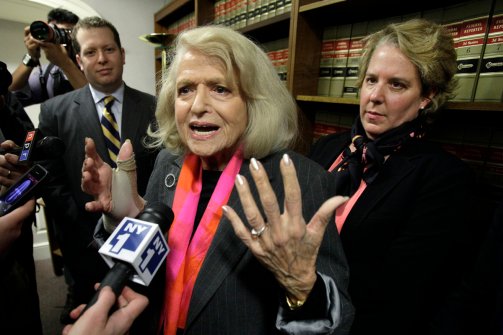 If you support equality for gays and lesbians, Thursday’s ruling by a federal court in New York striking down the Defense of Marriage Act seems very good. The problem is it’s too good.

Why? Because now that two federal courts have struck down DOMA’s key provisions in the past six months, the matter is almost certainly going to the Supreme Court, and the Second Circuit’s interpretation of equal protection in Windsor v. United States is more expansive than anything the high court has yet endorsed.
( Collapse )

Malala Yousafzai has taken one more step in her very long and difficult journey. Separated from her family for now, the 14-year-old Pakistani schoolgirl arrived today at Birmingham’s Queen Elizabeth Hospital, Britain’s primary receiving facility for military casualties returning from overseas. Doctors say she still has not regained consciousness since being shot in the head by a Pakistani Taliban gunman who forced his way into a van full of schoolgirls, asked for her by name, and opened fire.

The attack has provoked unprecedented levels of public outrage, both in Pakistan and Afghanistan—even among people who have in the past sympathized with the militants. “First of all, attempting to kill a 14-year-old girl is a low act,” says Mullah Yahya, who was a high-ranking Afghan Information Ministry official back in the 1990s, when Mullah Mohammed Omar’s regime was in power. “Second, claiming responsibility for it is a sign that the [Pakistani] Taliban are not aware of the media’s importance. I have seen more anger against the religious elements in the past week than in all my 40 years of life.” Pakistan’s interior minister, Rehman Malik, says the government has posted a $1 million bounty on Ehsanullah Ehsan, the Pakistani Taliban spokesman who claimed responsibility for the shooting.

The Taliban claiming "media bias" over them getting bad press for shooting a 14-year-old girl in the head. Seriously.

Sweden's King Carl XVI Gustaf on Wednesday said he would not present the "Environmental Hero of the Year" (Årets miljöhjälte) award, given this year to a Swedish teen activist who took a leading role in protesting the construction of a controversial limestone mine on the Baltic island of Gotland.

One mining company suggested that king was trying to avoid taking sides on the issue, which resulted in a spirited protest action as well as ongoing legal dispute.

The winner of the prize, 18-year-old Alva Snis Sigtryggsson, took home the award for her work in preventing a quarry being constructed near the Ojnare forest on northern Gotland.

The king's decision came as Sweden's Supreme Court (Högsta Domstolen) ruled on Wednesday that mining company Nordkalk could no longer continue its work on the island, after a reviewing the validity of a permit allowing the company to open the quarry.
( Collapse )

In 1980 he made Nicolae Ceaușescus a knight of the Royal Order of the Seraphim. He's also fangirled over the monarchy in Brunei, another dictatorship.

Today's episode of The View was supposed to boast a double shot of Romney, but when Mitt backed out due to "scheduling conflicts," his nice wife Ann appeared on the program by herself. And when the hosts of the show asked her about issues rather than gently tossing her nice, Ann-appropriate softballs, the outrage artists at Fox News could not wait to point out the injustice of the whole thing.

To be fair, the soft-focused hosts did ask Ann some kind of pointy questions. Whoopi Goldberg kicked off the interview by asking how she and her husband would console military families who had lost a loved one in combat when Mitt avoided the Vietnam draft four times and none of their five sons had served.

To that, Ann diplomatically replied, "We all find ways of serving."

The Maricopa County Elections Department mistakenly listed the wrong date of the upcoming general election on an official government document.

The error appears on a document containing a voter ID card.

In addition to the ID card, the piece of paper it comes in lists other information such as important election dates.

In the corner of the document, it says November 6th in English but in Spanish it reads 8 de Noviembre, the 8th of November.

A Pennsylvania man employed by a company working for the Republican Party of Virginia was arrested by investigators from the Rockingham County Sheriff’s office on Thursday and charged with destroying voter registration forms.

Colin Small, a 31-year-old resident of Phoenixville, Pa., worked for Pinpoint, a company hired to register voters on behalf of the Republican Party of Virginia. Prosecutors charged him with four counts of destruction of voter registration applications, eight counts of failing to disclose voter registration applications and one count of obstruction of justice.

THE Twitter account of BNP leader Nick Griffin has been suspended after he threatened a gay couple.

The Far-Right politician caused outrage by tweeting the home address of Michael Black and John Morgan and telling them a "British Justice Team" was coming to get them.

His comments came after Black and Morgan won a court case against Christian B&B owners who refused to let them stay.

The court had ruled the couple suffered unlawful discrimination.

Finally found a platform that won't tolerate your hate, Nick? (and sorry for posting twice so quickly, but I just found this and had to share~~)

You’d think that if it weren’t for the Taliban shooting at them, millions of girls in Pakistan would be sitting in school, and that if you’re not endorsing American drone strikes in Pakistan, you might as well be signing death warrants for school-going girls.

OP: I thought this was an interesting piece that went beyond the "omgggg evil taliban see what happens if AMURRIKA doesn't hunt them down!" reaction. No "drone" tags mods?

One week after Mo Yan became the first Chinese author to win the Nobel prize, proud local officials rushed out a £70 million plan to transform his sleepy village into a "Mo Yan Culture Experience Zone".

Proposals for big pipelines and interprovincial power line projects will no longer have to prove they won't damage or destroy navigable waterways in Canada, under changes introduced by the government Thursday.

These big projects are exempt under the new navigation protection act proposed in the government's second omnibus budget bill. The new act would replace one of the country's oldest laws, the Navigable Waters Protection Act. It was established in 1882 and said that no one could block, alter or destroy any water deep enough to float a canoe without federal approval.

For people who don't realise how ridiculous this is, there are at least 97 lakes within an hours drive of where I live. One of Canada's biggest resources is our massive reserves of fresh water, most of which will no longer be protected.

It's also completely transparent that this was meant to help the Shell pipeline by removing the river that's going to be affected by it from protection, which is perhaps one of the reasons the Tories buried it in the budget.
Collapse