I hope this looks ok, I wasn't able to preview it.

"By virtue of your vow of obedience to me as your Bishop, I require that this letter be personally read by each celebrating priest at each Weekend Mass," Jenky wrote in a letter circulated to clergy in the Catholic Diocese of Peoria.

In the letter, Jenky cautions parishioners that Obama and a majority of U.S. senators will not reconsider the mandate that would require employers, including religious groups, to provide free birth control coverage in their health care plans. "This assault upon our religious freedom is simply without precedent in the American political and legal system," Jenky wrote.

Sony France has made a bit of a boob.

The Puteaux-based corporation has decided to run a rather risqué magazine advertisement that likens its PS Vita handheld console to a woman with no head and four breasts.

The advert, which you can see just below this paragraph, is accompanied by a small tagline. "Touch both sides. Twice the sensations," it reads, which obviously refers to the Vita's front-facing touchscreen and rear-facing touchpad.

Staten Islanders On Sandy Response: We’ve Been Left FAR Behind

Borough Is In Shambles, But Little Help Has Arrived; They Ask: Where Is FEMA?

Source (with video, have trouble embedding for some reason)

NEW YORK (CBSNewYork) — Staten Island residents are furious. They feel that in the aftermath of Superstorm Sandy they’ve been ignored and left to fend for themselves.

CBS 2′s Jessica Schneider toured the borough on Thursday night and saw one home on Cedar Grove Avenue that looks like it was torn to shreds by a tornado.

However, it was surging ocean waters that tore the house apart, and filled others with more than 10 feet of water.

It’s that type of apparent neglect that has left residents saying they haven’t received the attention or help they so desperately need.

WASHINGTON -- Customized mass-mail campaigns from groups on the left and the right are using peer pressure to get out the vote by comparing recipients' voting records with those of their neighbors.

A first wave of mailers from a conservative group has spawned complaints about invasion of privacy and intimidation.

More than 2 million registered voters around the country recently received flyers in the mail from Virginia-based Americans for Limited Government. The “vote history audits” in the mailers show whether recipients made it to the polls in the last several elections, and list neighbors by name and address with their voting records.

A spokesman for the group said in a statement to reporters that the mailing "has one goal and one goal only, to increase participation in the electoral process."

Election boards across the country have been flooded with complaints. "They view them as an invasion of privacy," said Johnnie McLean, deputy director of the North Carolina state election board. Voters particularly don't like information about themselves being sent to their neighbors, she said.

One recipient, Jill Butler of Forest, Va., complained to The Huffington Post: "I think my voting record should be between me and not really anyone else."

Voting records are public documents, but haven't typically used so overtly in politics.

In Florida, counting votes has been controversial for some time; particularly since the 2000 election. And with early voting underway as of Saturday, there are already questions being raised about the vote count in Broward County.

Broward is a Democratic stronghold that Barack Obama is expected to carry by a large margin. But initial early vote totals reported by the office of the Broward Supervisor of Elections changed on Sunday, in some cases dramatically, causing some to question the numbers.

An analysis of the unofficial totals by early voting location on the Broward Supervisor of Elections website from Saturday, compared to the tallies posted on Sunday, shows that in one location, the E. Pat Larkins Community Center, located on Martin Luther King Blvd. in Pompano Beach, the revised totals showed 1,003 fewer votes. The initial tally reported from the polling place in the heavily black neighborhood showed 2,945 votes, but the revised tally was 1,401. Across the 17 Broward polling locations, 15 saw their vote totals revised, mostly by minute amounts of between 1 and 7 votes. But the three more significant changes, including the addition of 398 votes in Tamarac (a racially mixed community) and adding 99 votes to the totals from Pompano Beach City Hall, whose demographic is majority white.

The revisions mean that 536 fewer total votes were reported in Broward — a reduction from 28,330 votes to 27,794 votes. That could be significant in a close election in a state where the presidential contest was decided by just 538 votes in 2000. 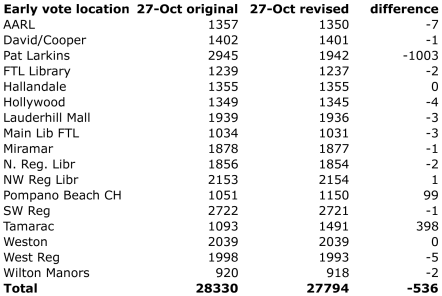