Source has pictures! TW for misogyny.

“Do hormones drive women’s votes?” That headline is not from a newspaper published in 1892 or 1922, but from CNN online in 2012. Posted just last week, the story survived all of seven hours, weathering ridicule from the blogosphere, before the news hub “determined that some elements of the story did not meet the editorial standards of CNN.”
( Collapse )

I saw this article on Tumblr and thought it ought to be posted here, too.

For those who don't know the word, a courtier is a person who hangs out in a royal court or the company of some Great Man to compete for and enjoy his favor. Some of every president's advisors and associates are courtiers. So also are the people who used to hang around Mike Tyson or Floyd Mayweather so that every time the champ ordered a cheeseburger they could say “Cheeseburger! Get the champ a cheeseburger! That's right champ!”

Melissa Harris-Perry's latest piece in the Nation, titled What Difference Would Obama's Re-Election Make to Black Americans? is far from the worst piece of sycophantic fluff produced by the hangers on who infest our black political class these days. It's mercifully brief and well written. But it powerfully illustrates the depths to which some leading black intellectuals feel obliged to sink to keep their perks and further their careers. 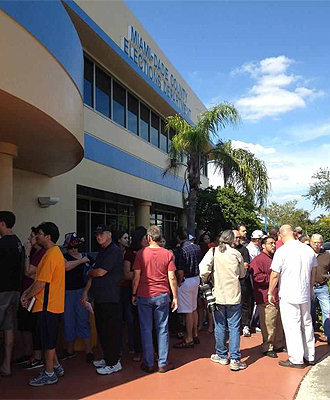 In a confusing turn of events, the Miami-Dade elections department shut down early Sunday afternoon after too many people showed up to request and cast absentee ballots in person.

The department had opened its Doral headquarters from 1 p.m. to 5 p.m. as a work-around to an early-voting crackdown law.

But by 2 p.m., around 180 voters had showed up, and department spokeswoman Christina White said the office would not be able to accommodate any more voters who showed up. Additional voters would be turned away, she said.

“We had the best of intentions to provide this service today,” she said. “We just can’t accommodate it to the degree that we would like to.”

Shortly after, however, the department locked its doors and shut down the operation without explanation. The people in line did not get to vote.

“Let us vote!” they shouted.

The department had only one ballot-printing machine, five voting booths and two staffers to assist voters Sunday.

“This is America, not a third-world country,” said Myrna Peralta, who waited in line with her 4-year-old grandson for nearly two hours before being turned away. “They should have been prepared.”

Tow trucks later began towing voters’ cars parked in a lot across the street from the elections department. “This is intimidation!” one voter yelled.

Yolo Akili explores how gay men’s sexism and male privilege shows up in relationship to women.

These questions came after a brief exploration of gay men’s relationship to American fashion and women’s bodies. That dialogue included recognizing that gay men in the United States are often hailed as the experts of women’s fashion and by proxy women’s bodies. In addition to this there is a dominant logic that suggests that because gay men have no conscious desire to be sexually intimate with women, our uninvited touching and groping (physical assault) is benign.

These attitudes have led many gay men to feel curiously comfortable critiquing and touching women’s bodies at whim. What’s unique about this is not the male sense of ownership to women’s bodies—that is somewhat common. What’s curious is the minimization of these acts by gay men and many women because the male perpetuating the act is or is perceived to be gay.

This is happening right now at Mitt Romney’s rally in Pennsylvania. Apparently it’s freezing, and Romney’s staff is refusing to let rally-goers leave. People are begging reporters for help.

From the NYT’s Michael Barbaro:

Source wonders why OP always seems to post in twos

UPDATE: it was a security issue, people were cold and tired. We're eventually let out once secret service cleared a secure way out
Collapse