CAIRO (AP) — Thousands of opponents of Egypt's Islamist president clashed with his supporters in cities across the country Friday, burning several offices of the Muslim Brotherhood, in the most violent and widespread protests since Mohammed Morsi came to power, sparked by his move to grant himself sweeping powers.

The violence, which left 100 people injured, reflected the increasingly dangerous polarization in Egypt over what course it will take nearly two years after the fall of autocrat Hosni Mubarak.

Critics of Morsi accused him of seizing dictatorial powers with his decrees a day earlier that make him immune to judicial oversight and give him authority to take any steps against "threats to the revolution". On Friday, the president spoke before a crowd of his supporters massed in front of his palace and said his edicts were necessary to stop a "minority" that was trying to block the goals of the revolution.

"There are weevils eating away at the nation of Egypt," he said, pointing to old regime loyalists he accused of using money to fuel instability and to members of the judiciary who work under the "umbrella" of the courts to "harm the country."

In upper-middle-class suburbs on the East Coast, the newest must-have isn’t a $7,500 Sub-Zero refrigerator. It’s a standby generator that automatically flips on backup power to an entire house when the electrical grid goes out.

In part, that’s a legacy of Hurricane Sandy. Such a system can cost well over $10,000, but many families are fed up with losing power again and again.

(A month ago, I would have written more snarkily about residential generators. But then we lost power for 12 days after Sandy — and that was our third extended power outage in four years. Now I’m feeling less snarky than jealous!)

More broadly, the lust for generators is a reflection of our antiquated electrical grid and failure to address climate change. The American Society of Civil Engineers gave our grid, prone to bottlenecks and blackouts, a grade of D+ in 2009.

So Generac, a Wisconsin company that dominates the generator market, says it is running three shifts to meet surging demand. About 3 percent of stand-alone homes worth more than $100,000 in the country now have standby generators installed.

“Demand for generators has been overwhelming, and we are increasing our production levels,” Art Aiello, a spokesman for Generac, told me.

That’s how things often work in America. Half-a-century of tax cuts focused on the wealthiest Americans leave us with third-rate public services, leading the wealthy to develop inefficient private workarounds.

It’s manifestly silly (and highly polluting) for every fine home to have a generator. It would make more sense to invest those resources in the electrical grid so that it wouldn’t fail in the first place.

But our political system is dysfunctional: in addressing income inequality, in confronting climate change and in maintaining national infrastructure.

It gets better later. But you could stand to be a little less gay now.

Such is the message that has an Alberta school trustee apologizing today after the "inappropriate" remark was made during a board meeting earlier this week.

The CBC reports that the Alberta School Boards Association was debating a proposal that would protect gay students from bullying and discrimination when trustee Dale Schaffrick first made the suggestion.

The proposal, based on a policy passed by the Edmonton school board last year, was eventually rejected.

"If children with a gay tendency appear a certain way, we know that we have to be vigilant to make sure they are not discriminated against," Schaffrick later told CBC.

When asked if the students should try to be less identifiably gay he said, "I think for their own benefit ... it would be helpful."

The suggestion that homosexual students would be best served to play down their personalities understandably upset gay-rights advocates and students. The concept flies in the face of an ongoing "It Gets Better" campaign designed to help gay, lesbian, bisexual and transgendered men and women survive the struggles they face in their youth.

Recently a group of B.C. Mounties joined the cause by releasing a video relating their own stories of coming out.

I want to apologize for my remarks at the ASBA Fall General Meeting. They were inappropriate and offensive. I apologize. It's important to clarify also that I was speaking as an individual trustee and not on behalf of the Pembina Hills Regional Division School Board.

It should be noted that Schaffrick was among the majority of trustees that opposed the anti-bullying bill, which was designed specifically to protect sexual minorities.

The group preferred an overarching policy that protected everyone, but advocates say that will not do enough to address the specific challenges faced by the gay and lesbian community.

So it is not as if Schaffrick doesn't want gay and lesbian students to be protected from bullying, he just doesn't believe they need any more protection than anyone else.

And if they would just take his suggestion and hide who they are, that plan will probably work just fine.

So, are you sure you needed to issue that apology, Justin . . .? 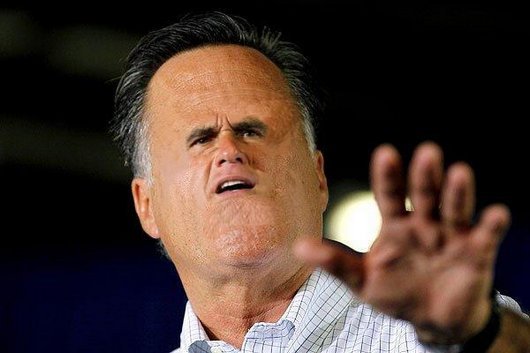 Liberal schadenfreude is about to reach overdose levels. Just when you thought the dead horse of Mitt Romney's campaign had been beaten more than enough — and most savagely by members of his own party — Dave Wasserman at Cook Political Report projects that the final count of the popular vote, which is still ongoing, will show Romney winning 47 percent of the electorate. In addition to proving that Obama handily won the popular vote, the final tally makes Romney the official candidate of the 47 percent — a delicious irony, liberals say, given that Romney infamously claimed that Obama was the candidate of the 47 percent of Americans who "believe they are victims" and are "dependent on government."