WASHINGTON -- Secretary of State Hillary Clinton regularly brushes off the idea of a 2016 presidential bid. But if she were to run, at least one prominent Republican thinks his party would be completely outmatched.

"The Republican party is incapable of competing at that level," Gingrich said during an appearance on NBC's "Meet The Press."

"First of all, she's very formidable as a person," he said. "She's a very competent person. She's married to the most popular Democrat in the country; they both think [it] would be good for her to be president. It makes it virtually impossible to stop her for the nomination."

In addition to having Bill Clinton's support, Hillary Clinton would also have the backing of President Barack Obama, who will still be a "relatively popular president," Gingrich added. "Trying to win that will be truly the Super Bowl."

Most people agree with Gingrich's assessment. A recent Washington Post poll found that 57 percent of people would support Clinton as a 2016 presidential candidate. 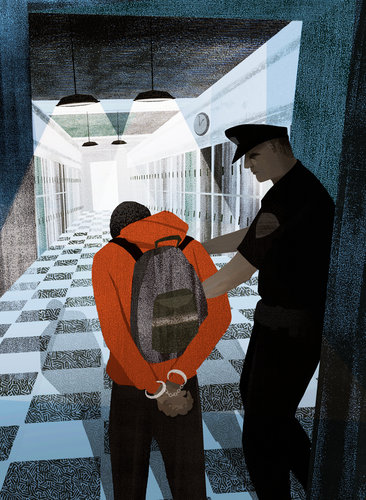 KENNETH screwed up. The 11th grader made a crude joke about the police officers in his Bronx high school — and an officer overheard.

“What did you say?” the officer demanded. “Say it again and I’m going to punch you in the [expletive] mouth.”

“You can’t [expletive] touch me,” said Kenneth, who has Asperger syndrome.

And so it began.

The officer pulled out his nightstick, with one hand, grabbed Kenneth (whose name I’ve changed) by the throat with the other, and pushed him against the wall. Then he pinned the boy’s arms behind his back and pulled him, by the neck of his hoodie, down the fourth-floor hallway.

The officer, who said Kenneth pushed him, arrested Kenneth and drove him to the local precinct, where officers took his photo and his fingerprints, and detained him overnight in a locked cell.

Kenneth says he was not permitted to call his mother — or a lawyer — until much later in the day and it wasn’t until the next morning, when he was taken to court and charged with resisting arrest, that he was read his rights. On the advice of court-appointed counsel, Kenneth pleaded guilty to disorderly conduct and emerged from the incident with an arrest record.

The story is disturbing, but not unusual.

Kenneth’s was one of 882 arrests in New York City public schools during the 2011-12 school year. (The police issued another 1,666 summonses for illegal conduct.) The incidents involved ranged from resisting arrest to possessing marijuana to drawing graffiti. Serious felony arrests were rare.

In a class-action lawsuit filed on behalf of all New York City public middle and high school students, the N.Y.C.L.U. has asked the court to make school discipline the responsibility of educators — not the police.

A disoriented monkey was found wandering aimlessly outside an Ikea store in North York Sunday.

The animal sighting quickly sparked a flurry of activity among Torontonians, who tweeted and re-tweeted pictures and created at least two parody accounts on Twitter.

Dressed in a shearling coat and a diaper, the monkey managed to open its crate, unlock the car door and go for a stroll in the Ikea parking lot – clearly a “smart monkey” for having managed all that, said Toronto Police Staff Sergeant Ed Dzingala.

Imgur has already come up with an ( Collapse )

There is a branch of anti-choice activists that will use pretty much anything as a medium for their message: newspaper ads, graphic signs displayed in front of schools, bus stop benches. You would think they would know well enough to leave one place untouched, though. Wire coat hangers.

You would be wrong.

I know it might seem silly to post a trigger warning for a hanger, but back alley abortions still occur and I don't want to potentially trigger anyone who may have had one.
Collapse