Commentary – Updated | The hacking collective known as Anonymous renewed their war on the Westboro Baptist Church today. After the haters from the infamous church posted their intentions to picket the funerals of the twenty children killed in the shooting at the Sandy Hook Elementary School, Anonymous responded by re-posting the personal and professional information for members of the church on the Internet. Now the general public can contact the church members directly and tell them what they think about people who would desecrate the funerals of murdered children.
( Collapse )

After a 1996 Mass Shooting, Australia Enacted Strict Gun Laws. It Hasn't Had a Similar Massacre Since.

On April 28, 1996, a gunman opened fire on tourists in a seaside resort in Port Arthur, Tasmania. By the time he was finished, he had killed 35 people and wounded 23 more. It was the worst mass murder in Australia’s history.

Twelve days later, Australia’s government did something remarkable. Led by newly elected conservative Prime Minister John Howard, it announced a bipartisan deal with state and local governments to enact sweeping gun-control measures. A decade and a half hence, the results of these policy changes are clear: They worked really, really well.

At the heart of the push was a massive buyback of more than 600,000 semi-automatic shotguns and rifles, or about one-fifth of all firearms in circulation in Australia. The country’s new gun laws prohibited private sales, required that all weapons be individually registered to their owners, and required that gun buyers present a “genuine reason” for needing each weapon at the time of the purchase. (Self-defense did not count.) In the wake of the tragedy, polls showed public support for these measures at upwards of 90 percent.

What happened next has been the subject of several academic studies. Violent crime and gun-related deaths did not come to an end in Australia, of course. But as the Washington Post’s Wonkblog pointed out in August, homicides by firearm plunged 59 percent between 1995 and 2006, with no corresponding increase in non-firearm-related homicides. The drop in suicides by gun was even steeper: 65 percent. Studies found a close correlation between the sharp declines and the gun buybacks. Robberies involving a firearm also dropped significantly. Meanwhile, home invasions did not increase, contrary to fears that firearm ownership is needed to deter such crimes. But here’s the most stunning statistic. In the decade before the Port Arthur massacre, there had been 11 mass shootings in the country. There hasn’t been a single one in Australia since.
( Collapse )

Doug Montzka, a contractor from St. Paul, describes himself as a devout Christian, a very conservative Republican and, only recently, a supporter of same-sex marriage.

He cannot pinpoint the moment he changed sides — his views have evolved, he says — but he does know that five years ago, he never would have voted for it.

While he trusts most everything in the Bible and knows that Leviticus condemns homosexuality as an abomination, “there’s no other reason I can think it’s wrong except the Bible,” he said.

“I’ve coached youth sports for years and had a few kids with gay parents,” said Mr. Montzka, 53. “As far as I’m concerned, if it works for them, it’s O.K. with me.”

While he worries that society could be changing too rapidly, he also sees changes for the better. “My brother married a black girl, and that worked out great for them,” said Mr. Montzka, who is white. “You’d never see that 50 years ago.”

He believes that his business dealings with gay couples would be simpler if they were married. “I’ve had cases,” he said, “where it’s one telling me the other one is supposed to be paying the bill.”

The ultimate decision maker was his conservative distrust of government interference in people’s private lives. “If I’m going to make a mistake,” he said, “it’s on the side of less government.”

On many fronts, Mr. Montzka’s change of heart reflects what opinion and exit polls have been showing in recent years: a sharp increase in support for same-sex marriage in a short time among every age group, including the biggest voting group, the baby boomers.

In a Pew Research poll taken at the end of October, 49 percent favored same-sex marriage, versus 37 percent in 2009.

The shift in attitude has been reflected recently in the courts and at the ballot box. On Dec. 7, the Supreme Court agreed to review two cases related to same-sex marriage. In Washington State, same-sex marriage became legal on Dec. 6. It will become legal in Maine on Dec. 29 and in Maryland on Jan. 1.

One reason behind the surge is evident from both opinion polls and interviews for this article: there is a marked increase in the number of people of all ages who know gay men and lesbians. Comment: more accurately, an increase of people who are aware they know...
( Collapse )

'Idle No More': Hunger-striking Attawapiskat chief vows to 'die' for her people as aboriginal protests spread

OTTAWA — Aboriginal Affairs Minister John Duncan is offering to meet this week with a northern Ontario chief who embarked on a hunger strike Tuesday out of frustration with the federal government.
( Collapse )
----------------------------
SOURCE.

(Post edited to fix links and a bit of formatting.)

A piece posted to the Tea Party Nation website yesterday, and sent to the group’s members in an email from TPN head Judson Phillips, blamed the school shooting in Newtown, Connecticut on teachers, unions, bureaucracy, and the presence of sex in popular culture. In a lengthy screed that’s essentially a round-up of every major cultural and policy grievance the American right holds with the rest of the country, author Timothy Birdnow cited concerns about the mental health of shooter Adam Lanza, the lack of spanking in schools, and the new movie “Django Unchained” — among other things — as evidence that American popular culture “has made murder, rape, mayhem, hatred, and violence ‘cool.’”

He then went on to recommend a number of interesting solutions, including a lamentation that George Zimmerman was not guarding Sandy Hook Elementary School: 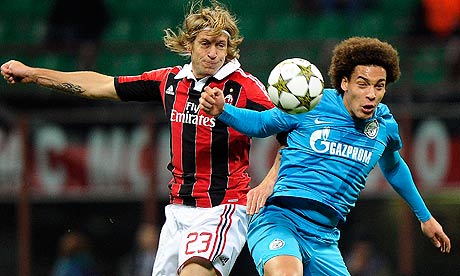 "We're not racists but we see the absence of black players at Zenit as an important tradition," Zenit fan club Landscrona said in a letter, called the "Selection 12 manifesto", posted on its website on Monday.

"It would allow Zenit to maintain the national identity of the club, which is the symbol of St Petersburg."

Zenit have been the only top club in Russia to have never signed an African player while the northern city of St Petersburg is known to have a strong right-wing nationalist influence.

The fans said they want more home-grown or European players in the team. "We only want players from other brotherly Slav nations, such as Ukraine and Belarus as well as from the Baltic states and Scandinavia. We have the same mentality and historical and cultural background as these nations," the letter said.

The Guardian
NBC News’ Chief Foreign Correspondent Richard Engel and members of his network production team were freed from captors in Syria after a firefight at a checkpoint on Monday, five days after they were taken prisoner, NBC News said early Tuesday.

“After being kidnapped and held for five days inside Syria by an unknown group, NBC News Chief Foreign Correspondent Richard Engel and his production crew members have been freed unharmed. We are pleased to report they are safely out of the country,” the network said in a statement.

“It is good to be here,” Engel said during a live appearance on TODAY from Turkey. “I’m very happy that we’re able to do this live shot this morning.”

So glad they're safe!

Forget what you know about mental illness.

Forget what you know about America's singular belief that guns are the one and only solution to so many of our problems — from how we combat crime to how we conduct our foreign policy.

Forget how guns are as essential to the stories that you watch on the small or big screen as dialogue, plot, and characters to cheer or jeer.

Because Erick Erickson knows what, or who, is to blame for yesterday's tragic mass murder in Newtown: Satan.

Now, Erickson, editor of the conservative website RedState, never specifically mentions the devil by name, but make no mistake, that is who the RedStater believes is behind the bloodbath at Sandy Hook Elementary.

Our nation once shared a God who we all prayed to. Increasingly, the loudest voices in the nation are hostile to that God and those who worship him. The conversation at times of evil is immediately drown out by political opportunists seeking to drive their agenda. The news channels meditate on the nature of gun violence and gun restrictions or what other restrictions or laws can ever be used.

We do that, in part, because in times of helplessness it makes us feel like we can do something.

But we can do nothing in the face of evil until we confront evil itself.

The tragedy unfolding today is not an act of the insane, but an act of evil. That evil may drive the shooter insane, but in focusing on the insanity we lose focus on the evil.

They’ll do so again. But in this small window America has a real moment to assess why it is that it is careening out of control morally and socially. In that small window, instead of discussing the politics or the laws, we should discuss the evil and the good and the God from whom we have, as a nation. drifted so far.