"This time, the words need to lead to action," said Obama, who set a January deadline for the recommendations. He vowed to push for their implementation without delay.

The president, who exerted little political capital on gun control during his first term, also pressed Congress to reinstate an assault weapons ban, which expired in 2004. He also called for stricter background checks for people who seek to purchase weapons and limited high capacity clips.

"The fact that this problem is complex can no longer be an excuse for doing nothing," Obama said. "The fact that we can't prevent every act of violence doesn't mean we can't steadily reduce the violence."

Twenty-seven years after driving from New York City to Chicago in a $2,000 Honda Civic for a job that probably wouldn’t amount to much, Barack Obama, in better shape but with grayer hair, stood in the presidential suite on the top floor of the Fairmont Millennium Park hotel as flat screens announced his re-election as President of the United States. The networks called Ohio earlier than predicted, so his aides had to hightail it down the hall to join his family and friends. They encountered a room of high fives and fist pumps, hugs and relief.

The final days of any campaign can alter the psyches of even the most experienced political pros. At some point, there is nothing to do but wait. Members of Obama’s team responded in the only rational way available to them — by acting irrationally. They turned neckties into magic charms and facial hair into a talisman and compulsively repeated past behaviors so as not to jinx what seemed to be working. In Boca Raton, Fla., before the last debate, they dispatched advance staff to find a greasy-spoon diner because they had eaten at a similar joint before the second debate, on New York’s Long Island. They sent senior strategist David Axelrod a photograph of the tie he had to find to wear on election night: the same one he wore in 2008. Several staffers on Air Force One stopped shaving, like big-league hitters in the playoffs. Even the President succumbed, playing basketball on Election Day at the same court he played on before winning in 2008.

(At the source: Inside the White House: Never-Before-Seen Photos)

But now it was done, and reason had returned. Ever since the campaign computers started raising the odds of victory from near even to something like surefire, Obama had been thinking a lot about what it meant to win without the lightning-in-a-bottle quality of that first national campaign. The Obama effect was not ephemeral anymore, no longer reducible to what had once been mocked as “that hopey-changey stuff.” It could be measured — in wars stopped and started; industries saved, restructured or reregulated; tax cuts extended; debt levels inflated; terrorists killed; the health-insurance system reimagined; and gay service members who could walk in uniform with their partners. It could be seen in the new faces who waited hours to vote and in the new ways campaigns are run. America debated and decided this year: history would not record Obama’s presidency as a fluke.

.... The rest continued at the source..(Worth the click for the gallery of pictures).

[ OP:Can we talk about the cover photo. Dark, silver, somber, shadow... did I mention dark? What do we think? ]
Friday morning at Sandy Hook Elementary School in Newtown, Conn., teachers and school staff were the first first responders. Teachers got their students into bathrooms and closets, teachers kept their students calm, and some teachers lost their lives. Principal Dawn Hochsprung and school psychologist Mary Sherlach are described as having run toward the shooting as Adam Lanza forced his way into the school. First-grade teacher Victoria Soto was killed after hiding her students in a closet; fellow teachers Anne Marie Murphy and Lauren Rousseau and behavioral therapist Rachel D'Avino were also killed. But it wasn't just those who died who protected their students on Friday.

On this day, this was their job, to lock classrooms and cover windows and crowd children into bathrooms and closets and try to keep them from making noise. That's become part of the job of teaching, and they knew what to do. Not just the teachers—a custodian ran through the halls checking that classroom doors had been locked, and the entire school was alerted to the situation by a worker who turned on the intercom.

Kindergarten teacher Janet Vollmer read her students a story to keep them calm. But that had to mean keeping her own voice calm enough not to alarm them. How do you do that sheltered only by a locked classroom door and some bookcases?

Library clerk Maryann Jacob led students crawling across a floor to a storage space they could lock, then handed out paper and crayons.

First-grade teacher Kaitlin Roig, seen in the video on the next page, got her students into a bathroom and later recounted how, as she worked to keep them quiet and unheard by the gunman,

I said to them 'I need you to know, that I love you all very much and that it's going to be okay,' 'cause I thought that was the last thing they were ever going to hear. I thought we were all going to die. You know, and I don't know if that's okay, you know, teachers ... But I wanted them to know someone loved them and I wanted that to be one of the last things they heard, not the gunfire in the hallway.

"I don't know if that's okay." Later the same day she hid in a bathroom believing she would die, Kaitlin Roig was wondering if she'd been unprofessional in her efforts to ensure that if her students died, they died knowing they were loved.( Collapse )

And, Obama said, he will push them "without delay."

Repeating some of the themes he has previously stressed about gun violence and Friday's mass shooting at an elementary school in Newtown, Conn., the president said that "sometimes ... words need to lead to action. ... The fact that this problem is complex can no longer be an excuse for doing nothing."

Obama noted that polls show the majority of Americans "support banning the sale of military-style" assault weapons and high-capacity ammunition clips. Also, most Americans support "background checks before all gun purchases," he said, as one way to prevent an "unbalanced man" from getting his hands on such weapons.

"I will use all the powers of this office to help advance efforts to prevent more tragedies" such as Friday's, the president said.


Uncle Joe, don't let us down!

Profile: South Korea's Park Geun-hye
The 60-year-old conservative follows the footstep of her father, Park Chung-hee, by winning the presidency. 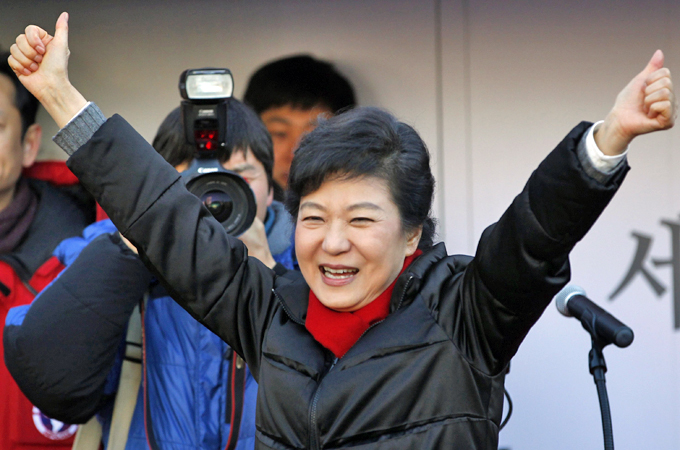 By winning the presidency, the 60-year old conservative follows the footstep of her father, late President Park Chung-hee, who seized power after a military coup in 1961.

"For us to have a female president I think would have a significant impact on the psyche of the people," Hahm told Al Jazeera. "It would be a great boost for the women of South Korea."

An engineer by training, she was first elected to South Korea’s National Assembly in 1998, serving five terms as a representative.

In 2007, she lost out to Lee Myung-bak in the party's presidential primary. Lee went on to become president, but the country's leaders are restricted to a single five-year term.

The elder Park was assassinated by his own spy chief in 1979. Five years earlier, his wife Yuk Young-soo's was also killed by a pro-North Korean agent who shot the first lady while aiming for the president.

Park Chung-hee won wide respect for transforming the poor war-ravaged nation into an economic juggernaut, but is also reviled in some quarters for his human rights abuses.

Still, many older South Koreans remember the almost two-decade rule with fondness and Park Geun-hye partly rode on the coattail of her father to launch her own political career.

Brian Myers of Dongseo University told Al Jazeera that the "senior vote" played a big role in the election given the country's rapidly ageing population.

At the same time, Park also had to appeal to younger voters who "really don't want to go back to that time," he said. During the campaign she was forced to apologise to the victims of her father's rule.

"She walked a tight rope," Myers said. "She's tried to signal to the older voters that she still got some of her father in her, and at the same time she's telling the youth vote that's she's going to be a completely different person."

With the country plagued by a growing wealth gap and high youth unemployment, Park has said she would work to improve welfare schemes and create jobs while committing herself to "economic democratisation".

On the eve of her election, she pledged to recreate her father's "Let's Live Well" miracle of rapid economic gains for a country that she said was labouring under heavy household debt, the high cost of raising children and poverty among old people..

Park also promised to safeguard the nation against external threats.

She cited North Korea's "provocations and nuclear threats" as well as territorial disputes with other countries, an apparent reference to the row with Japan over ownership of islands in the Sea of Japan.

"At this time of crisis, we need a prepared leader," she said, adding she would open a new era of peace and co-operation in northeast Asia.

so in the latest round of "health care for all is SOCIALISM!!!1ONE", South Carolina thinks they can criminalize plan to criminalize any use of the ACA.

LOL, who do these people think they are?

However, included in the magazine's explanation of its choice was a line to a LightBox page featuring photos of the president snapped by official White House photographer Pete Souza — one of which does a better job of cementing the correctness of Time's selection than any 10,000-word profile can.

"President Barack Obama pretends to be caught in Spider-Man's web as he greets the son of a White House staffer in the Outer Oval Office, Oct. 26, 2012."

Is it too early to talk about a third term? 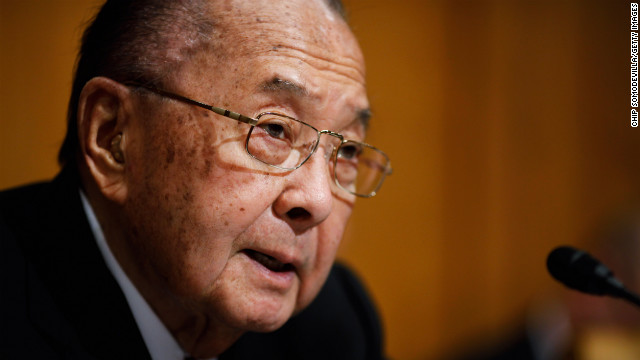 Daniel Inouye, a World War II veteran who received the Medal of Honor and represented Hawaii in the Senate for five decades, has died, his office announced Monday. He was 88.

He died of respiratory complications Monday evening shortly at Walter Reed National Military Medical Center, with his wife and son at his side.

Inouye was hospitalized last week and had undergone procedures to regulate his oxygen intake.

He won his ninth consecutive term in 2010 and was the second-longest-serving senator in the chamber's history, trailing only Sen. Robert Byrd of West Virginia. Inouye was a senator for all but three of Hawaii's 53 years as a state and had served as its first House member before that.

Senators of both parties took to the chamber floor Monday to mourn his death, and President Barack Obama described Inouye as "a true American hero."

Daniel Inouye was an amazing, beloved senator here in Hawaii. As a little girl, I remember him being in office and him just always being there. Even up until the very end, Inouye held a positive outlook on life, planning on running again in 2014. His death leaves behind a gap that will never fully be replaced.