A petition calling for TV host Piers Morgan to be deported from the US following his outspoken comments on gun control has attracted more than 69,000 signatures.

Morgan last week lambasted pro-gun guests on his show, after the Dec. 14 mass shooting at Sandy Hook Elementary School in Newtown, Connecticut, where a gunman shot dead 26 people, including 20 children.

The CNN host provoked the fury of gun rights activists when he interviewed Gun Owners of America executive director Larry Pratt, in the wake of the school shootings in Newtown, Connecticut, and said to him: "You're an unbelievably stupid man, aren't you?

OP: I never thought I'd say this but Piers Morgan has made me proud to be British. When you deport people that disagree with you that's fascism isn't it?

I woke up just past midnight with a bolt. My six-month-old son was crying. He has a cold – the second of his short life – and his blocked nose frightens him. I was about to get up when he started snoring again. I, on the other hand, was wide awake.

A single thought entered my head: Chief Theresa Spence is hungry. Actually it wasn’t a thought. It was a feeling. The feeling of hunger. Lying in my dark room, I pictured the chief of the Attawapiskat First Nation lying on a pile of blankets in her teepee across from Parliament Hill, entering day 14 of her hunger strike.

I had of course been following Chief Spence’s protest and her demand to meet with Prime Minister Stephen Harper to discuss the plight of her people and his demolition of treaty rights through omnibus legislation. I had worried about her. Supported her. Helped circulate the petitions. But now, before the distancing filters of light and reason had a chance to intervene, I felt her. The determination behind her hunger. The radicality of choosing this time of year, a time of so much stuffing – mouths, birds, stockings – to say: I am hungry. My people are hungry. So many people are hungry and homeless. Your new laws will only lead to more of this misery. Can we talk about it like human beings?
( Collapse )

Naomi Klein in The Globe and Mail

First up:
The gun owner next door: What you don't know about the weapons in your neighborhood 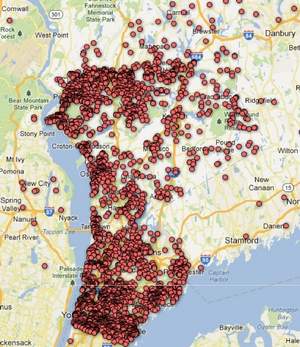 In May, Richard V. Wilson approached a female neighbor on the street and shot her in the back of the head, a crime that stunned their quiet Katonah neighborhood.

What was equally shocking for some was the revelation that the mentally disturbed 77-year-old man had amassed a cache of weapons — including two unregistered handguns and a large amount of ammunition — without any neighbors knowing.

“I think that the access to guns in this country is ridiculous, that anybody can get one,” said a neighbor of Wilson’s who requested anonymity because it’s not known whether the gunman, whose unnamed victim survived, will return home or be sent to prison. “Would I have bought this house knowing somebody (close by) had an arsenal of weapons? No, I would not have.”

Thousands of people, many from outside Westchester, Rockland and Putnam counties, have taken to their computers and phones in rage after The Journal News posted an online database of local gun-permit holders.

The database, legally obtained from the County Clerks’ Offices through a Freedom of Information Act request made after the shootings in Sandy Hook, Conn., that left 20 children and eight adults dead, has been called irresponsible, dangerous and leaning toward intimidation by online pundits.

Social media played a big part in the exponential spread of the story, whose map has been recommended more than 20,000 times. Two Facebook posts linking to the article on Sunday garnered 346 comments as of Tuesday evening. That’s in addition to 167 comments posted directly to Facebook.com/LoHud since the article was published.

Comments at the sources rapidly devolve into wank, view at your own discretion.

Despite the potential for wank, I think this poses a very good question: if we're going to advocate for serious gun control in the US, surely a part of that is total registration of all firearms. Should those records be private, or available to the public? If the records should be public, how much of the information should be available? How easily should it be available (e.g. should you have to file a request, or should it be published in a searchable web page)?
CNN) -- On the Sunday after the Newtown massacre, President Barack Obama traveled to Connecticut to comfort the grieving community. As the president offered what he could to the town, other American communities, in less visible ways, were grappling with their own menace of violence.

In Camden, New Jersey -- a city that has already suffered 65 violent deaths in 2012 , surpassing the previous record of 58 violent deaths set in 1995 -- 50 people turned out, some bearing white crosses, to mourn a homeless woman known affectionately as the "cat lady" who was stabbed to death (50 of the deaths so far this year resulted from gunshot wounds.)

In Philadelphia, on the same Sunday, city leaders came together at a roundtable to discuss their own epidemic of gun violence; the year-to-date total of homicides is 322. Last year, 324 were killed. Of those victims, 154 were 25 or younger. A councilman at the roundtable asked, "How come as a city we're not in an outrage? How come we're not approaching this from a crisis standpoint?"

The concerns go beyond Philadelphia. In the week following the Newtown massacre, there were at least a dozen gun homicides in Chicago, Detroit, Baltimore and St. Louis alone. In a year of highly publicized mass shootings, inner-city neighborhoods that are plagued by gun violence have continued to be neglected and ignored.

According to the Centers for Disease Control and Prevention, large metropolitan areas account for more than two-thirds of deaths by gun violence each year, with inner cities most affected. The majority of the victims are young, ranging in age from their early teens to mid-20s, and black.

To track these violent deaths, many communities and media organizations have set up agonizing online trackers -- homicide watches or interactive maps -- that show each subsequent victim as just another data point. These maps are representative of a set of issues far larger than the nameless dots suggest.

In the immediate aftermath of Newtown, as politicians and public figures across America grapple with the horrible truths of gun violence, far less visible from the national spotlight is the steady stream of inner-city victims.

The media is fixated, and with justification, on the string of high-profile massacres that have rocked the nation in Aurora, Colorado; Tucson, Arizona; Virginia Tech; and now in Newtown. Yet in many of America's neighborhoods most affected by the calamity of gun violence, there is a warranted exasperation -- residents are tired, tired of the ubiquity of guns, tired of fearing for their children's safety, tired of being forgotten.

The same studios are the principle driving force behind the forthcoming “six strikes” anti-piracy scheme that will log IP addresses engaged in media piracy and deliver warnings to users.

While it’s impossible to say exactly why these IP addresses were participating in bittorrent networks — and there are a variety of uses for peer-to-peer exchanges that do not involve illegal activities — it’s most likely that individual employees were sharing media from their work computers.

Though surprising, this isn’t the first time movie studio addresses have been caught engaging in piracy. A now-shuttered Russian website called “You Have Downloaded,” which functioned similarly to ScanEye, said in 2011 that it had also identified IP addresses belonging to the same studios engaging in online piracy. The site also picked up piracy at the Department of Homeland Security, the French president’s office and even at the Recording Industry Association of America.

IP addresses are often used by law firms that file suit on behalf of movie and music studios against individuals accused of pirating copyrighted materials online. The “Six Strikes” program will also focus on IP addresses, using them as the basis for injecting warning messages about illegal online activity.

Despite the entertainment industry’s reliance on IP addresses for copyright enforcement, a judge in New York ruled last May that the numbers are no longer enough to specifically identify an individual user due to the prevalence of wireless Internet that allows multiple users and devices to share the same IP address.

Ukraine's ultra-nationalist party, Svoboda, was a shock winner in October's parliamentary election, capturing more than 10% of the vote and entering the legislature for the first time. How radical is it?

Yesterday, during a cable news discussion of gun violence and the Newtown school shooting, I dared mention a taboo truism. During a conversation on MSNBC’s “Up With Chris Hayes,” I said that because most of the mass shootings in America come at the hands of white men, there would likely be political opposition to initiatives that propose to use those facts to profile the demographic group to which these killers belong. I suggested that’s the case because as opposed to people of color or, say, Muslims, white men as a subgroup are in such a privileged position in our society that they are the one group that our political system avoids demographically profiling or analytically aggregating in any real way. Indeed, unlike other demographic, white guys as a group are never thought to be an acceptable topic for any kind of critical discussion whatsoever, even when there is ample reason to open up such a discussion.