The death of Frank R. Lautenberg on Monday has left Gov. Chris Christie of New Jersey with the kind of opportunity that politicians usually covet: the chance to give away a seat in the United States Senate. But the decision is fraught with pitfalls, none bigger than having to choose between improving his party’s fortunes in Washington and furthering his own political ambitions at home.

Mr. Christie, a Republican, is up for re-election in November and hoping to secure a huge victory margin, which he could then use to accelerate his drive to present himself as a presidential candidate with broad appeal even in a blue state.

But adding a special election for the Senate seat to the ballot could put Mayor Cory A. Booker of Newark at the top of the Democratic ticket, potentially energizing more Democrats, who already outnumber Republicans in New Jersey by 700,000 registered voters, to come to the polls.

The implications extend beyond New Jersey to Washington, where both parties are maneuvering for strategic advantage in a Senate where even a single vote can derail legislation. The appointment of a Republican as the interim replacement for Mr. Lautenberg, a Democrat, would create immediate complications for the White House and Democrats on Capitol Hill as they try to push through presidential nominations and an overhaul of immigration laws under the constant threat of Republican filibuster.

Mr. Lautenberg, a steadfast liberal who was New Jersey’s longest serving senator and the nation’s oldest senator, died of complications from pneumonia in Manhattan. He was 89 and had already announced he would not run for re-election next year.

Mr. Christie, whose popularity soared after Hurricane Sandy, is so eager to avoid appearing on the same ballot as Mr. Booker, according to Republican insiders, that he is considering two alternatives to a November election for Mr. Lautenberg’s successor. Each carries a potential political cost, and the dispute could easily be challenged in court.

The option that is being pushed by many in Mr. Christie’s own party would be to name a Republican to hold the seat and then delay an election on a replacement until 2014. This would give his national party an unexpected gift: a reliable vote in the Senate — for a year and a half, at least — from a state that has not elected a Republican to the upper house in 41 years. But it would also open Mr. Christie up to allegations of sidestepping the electoral process.

So from what I see his choices are a. do the right thing and hold a special election, or b. make his party happy by trying a shady as hell end run to get a Republican in a Democratic seat. With any luck, he'll declare himself an independent and hold that election.

In a decision fraught with political implications, Gov. Chris Christie of New Jersey announced on Tuesday that he would schedule a special election in October for the Senate seat left vacant by the death of Frank R. Lautenberg on Monday.

This Is Capitalism Now: How a Coal Company Bilked 20,000 Workers Out of Health Benefits
Corporate America is coming for your retirement

The revolution is over, and Gordon Gekko won.

Three decades on from the leveraged buyout boom, the morals, or lack thereof, of the fictional private equity titan have become the morals of management: greed is good, more is better, and employee benefits are an inconvenient obstacle to unlocking shareholder value. In other words, it's not just corporate raiders coming after your pension now; it's corporate America too.

Just look at Patriot Coal. That's the spin-off company of Peabody Energy, the country's biggest coal producer, that was larded up with 40 percent of its parent company's healthcare liabilities and just 13 percent of its assets back in 2007. A year later, Patriot saddled itself with even more obligations when it bought Magnum Coal, itself a subsidiary of Arch Coal, the nation's second-largest coal company. The end result of all this financial chicanery was Patriot getting stuck holding the bag of retiree health benefits for 22,000 people -- 90 percent of whom never worked a day for Patriot, but rather for Peabody or Arch.
( Collapse )

As trial approaches for the man who generated national controversy over Stand Your Ground laws when he shot dead 17-year-old Trayvon Martin on a Florida street, a jury has acquitted another man under Florida’s controversial law, after he shot dead a man he caught having sex with his wife.

Ralph Wald, a 70-year-old Vietnam veteran, walked into his home around midnight, and less than ten seconds later, fired three shots at Walter Conley, according to ABC News. He told the jury he thought Conley was raping his wife when he saw them having intercourse in his home. But during a 911 call, when the dispatcher asked Wald if the man was dead, Wald responded, “I hope so!” and refused to help the man. He asked for medical help for his wife, Johnna Flores, since he thought he accidentally shot her also. He said he didn’t recognize Conley even though he had been roommates with his wife prior to her relationship with Wald, lived next door to Wald, had tattoos of Flores on his neck and back, and worked for Flores at her fencing company.

Prosecutors argued that Wald, who suffered from erectile dysfunction, killed Conley in a jealous rage, pointing out that Wald used the word “fornicate” in reports to police, and never the word “rape.”

To acquit Wald under the state’s Stand Your Ground law, Wald had to prove only that he believed his wife was being raped. It doesn’t matter that he shot immediately without taking time to assess the situation, nor that he could have likely taken other measures short of firing three shots into Conley’s head and back. Stand Your Ground laws authorize the unfettered use of deadly force where someone fears assault, without even a duty to first attempt to retreat.

Studies have shown that Stand Your Ground laws are racially discriminatory, associated with higher homicide rates, and don’t deter crime. But even after outrage over Florida’s law in the wake of Trayvon Martin’s death, attempts to repeal and change these NRA and ALEC-backed statutes have overwhelmingly failed.

Even without a Stand Your Ground law, there are other charges and defenses for heat-of-the-moment crimes like this one with significantly lesser punishment than premeditated murder. Stand Your Ground laws, by contrast, exonerate defendants who kill without hesitation from any criminal liability at all. And it encourages the sort of cowboy justice that might empower one to believe they could take punishment into their own hands — whether it be for adultery or some other wrong — under the guise of self-defense. 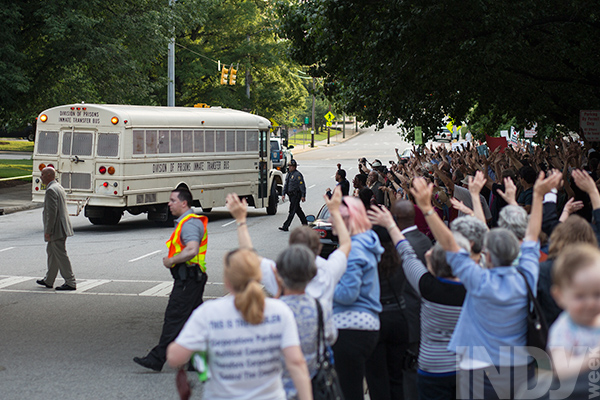 Upwards of 1,600 demonstrators amassed outside the North Carolina General Assembly in Raleigh on Monday, railing against the "extreme agenda" of the GOP-controlled legislature, WNCN reported. As attendees of the "Mega Moral Monday" protest spilled from the square outside the building and into the state Senate chambers, WRAL reported that 151 were arrested and released by 5 a.m. on Tuesday.

Monday's demonstration is the latest in a series of "Moral Monday" events organized by the North Carolina NAACP and other civil rights groups, activists and unions. They've been taking place since April, though the gathering this week was by far the largest, and the arrests nearly doubled the total of the previous four protests.

Organizers have decried the increasingly conservative nature of the state legislature, which has been pushing controversial issues such as voter ID, hydraulic fracking and cuts to education spending.

"The people are awake now, and we have decided to stand up," state NAACP chapter president Rev. William Barber told the crowd Monday. "We are a movement. This is not a moment."

Republicans inside the building appeared largely unmoved, despite the raucous protests.

"There is no buzz. There's none," state Sen. Tom Goolsby (R) told WRAL over the echoes of chants from demonstrators when asked if Republicans were paying attention.

Instead, Goolsby maintained that they were "keeping our promises to the voters."

State Rep. John Blust (R) used a more regional analogy to explain his attempt to brush the demonstrations aside.

“I think of it like Carolina playing at Duke,” he told the Raleigh News and Observer, invoking the historic Tobacco Road college basketball rivalry. “I’m not going to let the Cameron Crazies throw me off my game.”

A pensioner has resorted to camping on a path, after Isle of Wight Council officials told her she was not entitled to emergency housing and advised her to buy a tent instead.

Dawn Martin, 62, said she had visited County Hall constantly to ask for help since she had to leave her winter-let apartment three weeks ago, but has been told cannot be housed because she does not meet the criteria.

"I've filled in so many forms I've lost count but the council say they can't do anything. They say I'm not vulnerable enough.

"I think the way I've been treated is diabolical. I don't know how they can say a 62-year-old woman camping alone at night isn't vulnerable. I can't afford to stay at a campsite,"she said.

She has been 'sofa-surfing' with friends and family, staying in bed and breakfasts when she can afford it and camping on cliff paths.