(The embedded video isn't showing up in the preview, so in case it doesn't work, you can see it here. Watch it, it's beautiful.)

WASHINGTON -- On Wednesday, Rep. Tammy Duckworth (D-Ill.), a veteran of the Iraq War, dramatically chastised a federal contractor who claimed that a high school sports injury had rendered him a service-disabled veteran.

A contentious bill that would require health teachers to inform seventh-grade students that abortion—along with smoking, drinking, drug use, and lack of prenatal care—can affect carrying a pregnancy to full term, passed a first reading in the North Carolina house Wednesday. Although the abortion claim has no basis in medical fact, 73 state senators voted in favor of it.

The bill is an amended version of SB 132, which in its original form required teachers of seventh-grade health classes to tell students that abortion causes preterm birth; the new version lists abortion as a potential cause of preterm birth along with risk factors like drug and alcohol use. As Paige Johnson, vice president of external affairs for Planned Parenthood of Central North Carolina, told RH Reality Check in early May when the bill was first introduced, there is “not a single national medical organization [that] recognizes a causal link between abortion and preterm birth.”

“This is nothing but a feel-good bill. It talks but doesn’t actually do anything,” said state Rep. Grier Martin (D-Wake), according to WRAL.com. “It tries to scare women, both young and old, in the decisions they make about their bodies.”

Rep. Martin is one of 44 state representatives who opposed the bill in what at some points was an emotional debate over privacy, health, the age appropriateness of the bill. and “bad personal choices,” according to some who witnessed it. However, the transcript of the proceedings will not be available; although one lawmaker who opposed the bill requested the debate be transcribed, he was thwarted by another colleague who supported the bill.

The bill is expected to receive a final vote in the house this week before going back to the senate for a final vote. If it is approved in both chambers, it would head to the the desk of Republican Gov. Pat McCrory, who promised when he ran for governor in 2012 that he would not sign any abortion restrictions into law.

It’s a promise that Suzanne Buckley, executive director of NARAL Pro-Choice North Carolina, told the News Observer she intends to hold him to. “I want to be very clear here,” she said. “We will consider anything less than a veto of legislation aimed at limiting access to abortion care as a breach of that promise.”

UPDATE, June 27, 2:15 p.pm EST: SB 132 has now passed both chambers of the state legislature and is heading to the governor for signature.

TW homophobia, maybe? Nothing blatant, but just in case. I'm sure it's in the comments. I'm afraid to look.


An openly gay lawmaker was silenced by colleagues on the Pennsylvania House floor Thursday when he attempted to speak about the Supreme Court's decision to strike down the Defense of Marriage Act.

State Rep. Brian Sims (D-Philadelphia) took to the House floor on Thursday to discuss the high court's landmark ruling, which found the federal law barring the government from recognizing same-sex marriages legalized by states to be unconstitutional. However, as WHYY News and Philly.com report, Sims' remarks were blocked by several state lawmakers using a procedural maneuver.

One of those lawmakers, conservative state Rep. Daryl Metcalfe (R-Butler), told WHYY that he believed Sims' comments would be a violation of "God's law."

Sims said he had no intention of criticizing gay marriage detractors, and had only planned to highlight the importance of the court's ruling.

Two other Democrats attempted to speak in support of Sims, but they too were blocked.

At the end of the session, Sims rose to speak again, criticizing Metcalfe and others who had blocked him.

"A few months ago I reminded this House that we put our hands on the Bible and swore to uphold the Constitution, not the other way around. What I did was in no way against the law of any God," he said, referencing a speech he made in April. "I can't call anyone a bigot, a homophobe or racist, but language used against me does not live up to the standards of this body."

Sims, who entered office in January, is the first openly gay lawmaker elected to the state legislature.

On Thursday, Sims and fellow Democratic Rep. Steve McCarter vowed to introduce a measure in the state House allowing same-sex marriage in Pennsylvania.

"LGBT Pennsylvanians are seeing their neighbors in New York, Maryland and Delaware, among other states, now qualify for the approximately 1,000 federal rights and benefits that come with civil marriage and they are increasingly asking why they don't have those same rights, as well as the state rights and benefits," Sims said in a statement.

God has no place in legal or government proceedings. How is this so hard for lawmakers to understand??

Also, PA doesn't allow same sex marriage, civil union, domestic partnership, or common law marriage. You gotta be straight and sign that piece of paper or your relationship doesn't count for anything.

Trayvon Martin’s trial might be intriguing, fascinating cultural theater to some. To me, it is more akin to a cultural trauma: a continual reminder of how unsafe all those young black men that I love actually are as they move through the world — and how tenuous and torturous it would be to seek justice on their behalf. Troubled, though, by the negative characterizations of Trayvon Martin’s friend Rachel Jeantel, after her first day of testimony, I tuned in yesterday in a show of sofa-based, sister-girl solidarity.

Immediately, I heard newscasters referring to her prior testimony, which I had watched on video, as combative and aggressive. And I felt my pressure start to rise.

These kinds of terms – combat, aggression, anger – stalk black women, especially black women who are dark-skinned and plus-sized like Rachel, at every turn seeking to discredit the validity of our experiences and render invisible our traumas. By painting Rachel Jeantel as the aggressor, as the one prone to telling lies and spreading untruths, it became easy for the white male defense attorney to treat this 19-year-old, working-class black girl, a witness to the murder of her friend, as hostile, as a threat, as the one who needed to be regulated and contained and put in her place.

I know these are just classic legal maneuvers of a good defense. Yet these maneuvers also provide an eerily perfect diagram of the cultural grammar that determines how black folks move through the world, always already cast as the aggressors, always necessarily on the defensive, all too often victimized, all too rarely vindicated.

No one knows this better than Trayvon Martin.

source
n yet another boost for gay rights, a federal judge in Michigan has blocked the state from enforcing a 2011 law that bans public employers from offering benefits to same-sex couples.

In the Michigan case, Lawson ruled in favor of five same-sex couples who sued the state over a 2011 law that prohibits various public employers, including cities and counties, from offering health benefits to same-sex couples. The American Civil Liberties Union challenged the law on behalf of the plaintiffs, who either lost their health insurance or stood to lose it as a result of the law.

“We're breathing a sigh of relief right now,” Peter Ways, an Ann Arbor teacher whose partner would have lost his benefits, said in a statement. “This law was clearly meant to target families like ours and to make us feel as though we didn't count.”

State officials in Michigan have defended the law, arguing it has a legal right to try to save money and “an interest in protecting marriage.” At a hearing before Lawson last year, state attorney Margaret Nelson argued that Michigan law does not recognize same-sex marriage.

“The plaintiffs assume that they are similarly situated to married employees,” Nelson said at the hearing, adding they “do not have a legally recognized relationship under Michigan law.”

Same-sex couples are viewed under Michigan law more like single people, friends or roommates, who also will lose their benefits as a result of the law change, according to Nelson.( Collapse )

All of the prisoners at Virginia's Richmond City Jail admit they made poor choices, and could be better fathers.

"I am definitely failing as a parent right now, just by being out of her life," Ronnell Glasgow said.

Most of the men are in their 20s and 30s. Gerald Ward is awaiting trial for guns and drug charges. He told us his daughter is only four. "But it's amazing what she understands. She understand that Daddy did something wrong, " he says.

As these troubled men serve out their sentences, their children pay a price - often spending the most important years of their lives without active father figures.

Regardless of the culture, there's something special and valued about the father-daughter bond, yet when these daughters go to visit their fathers in jail, they can only speak to them through a thick glass or on the telephone.

"It is hard for her to release and talk to me behind the glass," said Edwards.

In 2012, the father-daughter dance at the Richmond City Jail was born.

I thought we could use an uplifting story after some of the events of this week. There's a video at the source, if you feel like crying more. 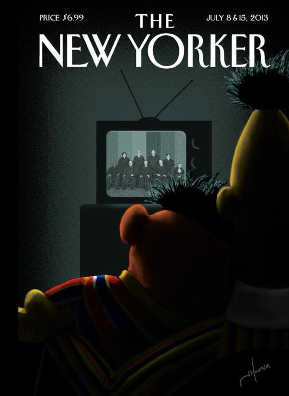 No, not even Muppets are spared in our culture war. Above is the cover of the new issue of The New Yorker.

“It’s amazing to witness how attitudes on gay rights have evolved in my lifetime,” said Jack Hunter, the artist behind the cover. “This is great for our kids, a moment we can all celebrate.”

Then again, in response to an 2011 online petition calling for Bert and Ernie to tie the knot, the Sesame Workshop’s Facebook page offered this statement:

“Bert and Ernie are best friends. They were created to teach preschoolers that people can be good friends with those who are very different from themselves. Even though they are identified as male characters and possess many human traits and characteristics…they remain puppets, and do not have a sexual orientation.”

From nymag.com: Like all things, it has elicited strong and wildly varied reactions. BuzzFeed and the Huffington Post both call the cover "amazing." But June Thomas at Slate says it's "a terrible way to commemorate a major civil-rights victory for gay and lesbian couples," because Bert and Ernie are not actually gay.

"Ernest & Bertram" -- a 2002 short film by Peter Spears. Some people feel the New Yorker cover is based on this short.
Youtube link: http://www.youtube.com/watch?v=8TeNdsoCIgc
( Collapse )

The defense lawyer who opened the George Zimmerman murder trial with a knock-knock joke has found himself in a sticky situation Friday after apparently taking a “selfie” photo earlier in the week, with his daughters Rachel and Molly West, that was later posted to Instagram.

Don West appears in a photo on the account of the user “mollywestttt” with the caption “We beat stupidity celebration cones … #zimmerman #defense #dadkilledit.” The implication being that West and his daughters were celebrating week one of the trial with ice cream cones. The photo was taken by Don West but posted by Holly West. 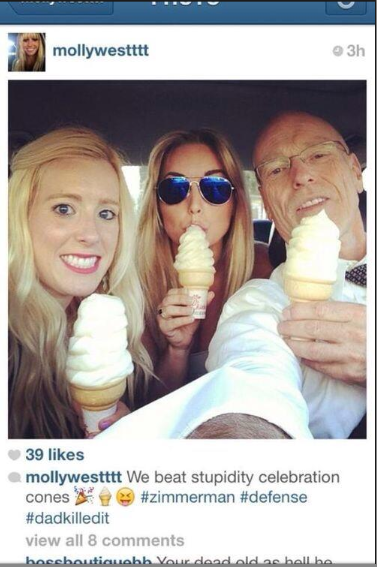 ABC’s Miami affiliate Local 10 has been on the case, using their dedicated Zimmerman Twitter account to give updates on the unusual photo. The station pointed out that the tie in the Instagram photo matched the one West wore on the first day of the trial, Monday. The ice cream photo was posted a few days later.

More story and images after the cut. ( Collapse )
Collapse