Republican frontrunner Donald Trump threatened Sunday to send his supporters to infiltrate the campaign rallies of Democratic hopeful Bernie Sanders, whom Trump continued to insist was behind disruptions at his events.

“Bernie Sanders is lying when he says his disruptors aren't told to go to my events,” Trump said on Twitter. “Be careful Bernie, or my supporters will go to yours!”

Trump said during an appearance Sunday on CNN’s “State of the Union” that he didn’t consider his post on social media to be a threat. He repeated his charge that Sanders had lied when he said his campaign wasn’t behind an influx of protesters that led to the cancellation of Trump’s planned rally in Chicago on Friday, where violence spilled onto the streets.

Appearing later on the same program, Sanders said Trump was the liar.

“This man cannot stop lying,” the senator from Vermont said.

Sanders said he has many supporters, and while some may attend Trump events as a form of peaceful protest, they are not doing so at his direction.

“I would hope my supporters will not disrupt meetings,” Sanders said. “We have millions of supporters, and people do things. But it was not our campaign.”

He blamed Trump for creating the environment that has led to violence at his rallies.

“This a man who keeps implying violence, and then you end up getting what you see,” Sanders said.

During his appearance, Trump predicted that if his supporters come to Sanders events, they would be be treated badly.

“They’d be arrested and all sorts of things would happen to them,” Trump said.

... it's been all over the political shows this morning.

Does anyone know what's the context for the second part of the video? Lord Jesus.

UPDATE: Apparently this video is from last year. Here's more context via Jezebel. Also, check out this opinion piece from the NYT.

President Barack Obama says he wants strong encryption, but not so strong that the government can’t get in.

“The question we now have to ask technologically is if it is possible to make an impenetrable device or system where the encryption is so strong that there is no key, there is no door at all?” he asked, speaking at the South by Southwest (SXSW) festival in Austin on Friday.

"Then how do we apprehend the child pornographer? How do we solve or disrupt a terrorist plot? What mechanisms do we have available to do even simple things like tax enforcement? If, in fact, you can’t crack that all, if the government can’t get in, then everybody is walking around with a Swiss bank account in their pocket. There has to be some concession to the need to be able to get into that information somehow."

It was Obama’s first extended disquisition on the contentious issue of encryption. There have been many reports about a rift in his administration between those who recognize that unbreakable encryption is inevitable, and those who think there must be an alternative. But Obama appears to be hearing only one side.

Obama insisted that there is a middle ground. “My conclusion so far is that you cannot take an absolutist view on this,” he said. “If your argument is strong encryption no matter what, and we can and should create black boxes, that, I think, does not strike the kind of balance we have lived with for 200, 300 years, and it’s fetishizing our phones above every other value. And that can’t be the right answer.”

But the problem is that you can’t have strong encryption without it being unbreakable. 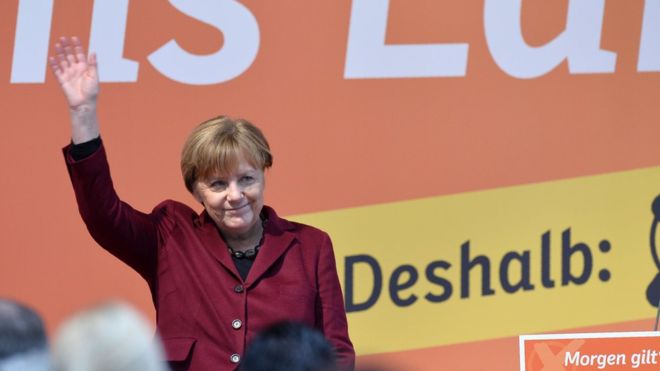 OP: So Merkel is losing support, probably because of the fact that she has been open to taking in refugees.

The Biggest Difference Between Clinton's and Sanders' Policies Isn't Their Substance

The contrasts between Hillary Clinton and Bernie Sanders are largely differences of degree. He's a self-proclaimed socialist; she fashions herself a "progressive that likes to get things done." He hopes to bust up the biggest banks and offer free tuition at public colleges and universities; she wants to tamp down on risky Wall Street behavior and require students to work part-time in order to attend college without building up debt.

But these discrepancies would likely disappear if either Democratic candidate wins the presidency and attempts to push these bills through a Republican Congress that considers all of the proposals too far left for its liking.

The real difference between Sanders and Clinton might come down less to the what of their policies than to the how of implementing them. When Sanders unveils a new policy as part of his presidential campaign, he tends to pair it with legislation he introduces in the Senate. Judging from his campaign, a President Sanders would spend much of his time trying to convince Congress to pass massive legislative overhauls.

Clinton, on the other hand, often pairs ideas for legislation with promises of executive action in her policy fact sheets. When she rolls out a new policy proposal, the most details are usually in descriptions of the unilateral actions she would take through the power of the executive branch.

Take the two campaigns' recent approaches to reforming marijuana laws. Sanders introduced a bill in the Senate that would end the federal prohibition on the drug (which, like other far-reaching bills he's introduced alongside campaign pledges, has not yet received even a committee vote). Clinton's approach isn't more modest just in substance, but also in approach. She'd change the classification of marijuana on the federal drug schedule, which would allow it to be used for medical purposes. That's within the purview of the executive branch without congressional intervention. (Neither campaign responded to requests for comment on how each candidate views the role of legislation and executive action.)

The past two presidents have both slowly ramped up the frequency of presidential action without consulting Congress. Following 9/11, George W. Bush expanded the scope of surveillance and the executive's international actions. "We’ve been able to restore the legitimate authority of the presidency," Dick Cheney once bragged. President Obama, despite promising to "reverse" that expansion in his 2008 campaign, has only furthered the trend. Upon first gaining office, with friendly Democratic majorities in Congress, Obama pushed expansive laws like the stimulus and the Affordable Care Act. But once Republicans took the House in 2010, Obama's ability to pass major changes through Congress was stymied, and he's turned to executive action, such as using the Clean Air Act to lower carbon emissions from coal plants after Congress failed to pass a cap-and-trade bill.

With Democrats unlikely to retake the House anytime soon, if a Democrat wins the presidency in 2016, most progressive gains will probably have to come in areas where the president doesn't have to seek congressional approval—through the courts and executive actions.( Collapse )

I think most of you here probably know I'm Team Hillary, but I just want to say how shocked, horrified, and saddened I am at the way Trump has been trying to blame the violence at his rallies on Bernie's supporters, of all people! Bernie was right when he called Trump a "pathological liar." He's that all right, as well as a dangerous psychopath who must NOT be allowed to get elected potus. Arrrggghhhh....there just are no words to express how much he disgusts and offends me.

(CNN)Donald Trump on Saturday called for protesters who disrupt his rallies to be arrested, one day after altercations and protests forced him to cancel a campaign rally in Chicago.

The comments capped a tumultuous day on the campaign trail in which a demonstrator rushed a stage where Trump was speaking.

Trump also accused Bernie Sanders' supporters of sowing unrest at his events and the GOP front-runner refused to back down from his rhetoric that some have cited as the cause of heightened tension at his rallies.

Trump's call to arrest protesters came at a campaign event in Kansas City, Missouri, where he was repeatedly interrupted at the beginning of his address.

"I'm going to ask that you arrest them," Trump said to the police. "I'll file whatever charges you want. If they want to do this ... we're going to go strongly for your arrests."

Trump said arresting protesters would "ruin the rest of their lives" by giving them a "big arrest mark."

"Once that starts happening, we're not going to have any more protesters, folks," Trump said.
( Collapse )

Am I the only one who thinks it's no accident that Trump has chosen to single out Bernie and his supporters as his scapegoats? I have a feeling it's because he's more afraid of Bernie than of Hillary or any of his GOP rivals. A lot of people who like Trump also like Bernie, and I'll bet that drives The Donald absolutely nuts. Just a theory, but it makes sense to me.

Government must do more than respond to emergencies, says Northern Manitoba grand chief 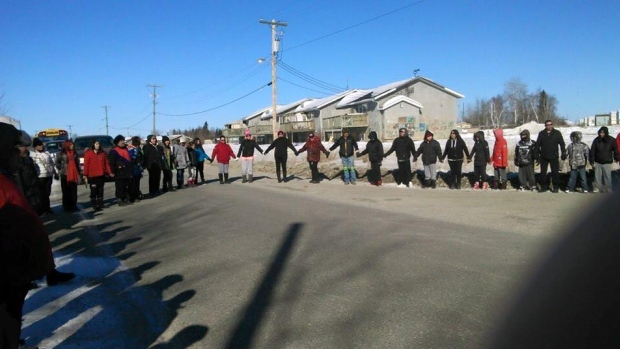 The 8:00 p.m. ET town hall will be hosted by CNN's Jake Tapper and TV One's Roland Martin. Questions will come from the moderators and also from Ohio voters.

The March 13 event will serve as the closing statement in this "Super Tuesday" Democratic primary and follow a similar format of the five critically acclaimed Democratic and Republican town halls that CNN has hosted this year.

Both former Secretary of State Hillary Clinton and Vermont Sen. Bernie Sanders have accepted their invitations to appear at the town hall.

How was your weekend, ONTD_P?

Mine has been stressful, just was told yesterday that one of my bf's good friends just found out that not only does she have a brain tumor (unsure of the size/ability to operate at this time) but that she's pregnant. She's only in her early 20's so good vibes/prayers/thoughts would be appreciated. Thanks guys <3

MARSHALLTOWN, Iowa -- The Clinton campaign says as soon as they receive an invoice, they'll pay the Des Moines Police Department for the services they provided at the Katy Perry concert last October. City Hall provided us a copy of the invoice that has already been sent. The invoice is dated November 19, 2015. The bill is nearly $1,800.

Video at the source

$4500 should be a drop in the bucket for the Clinton Campaign, which currently has over $77million cash on hand.
Collapse