It was a never-ending stream of people. As of 7:30 p.m., Saturday, around 1 million people gathered at Gwanghwamun, central Seoul, calling for President Park Geun-hye to step down, according to the rally's organizers.

People from all walks of life chanted, "Park should step down," in a huge demonstration against the President who is under pressure over the influence-meddling scandal involving her confidant Choi Soon-sil. The police estimated 220,000 citizens were there.

It was the largest rally of the nation in 30 years, bigger than the 2008 protest rally against former President Lee Myung-bak's position to import American beef in spite of the mad cow scare. 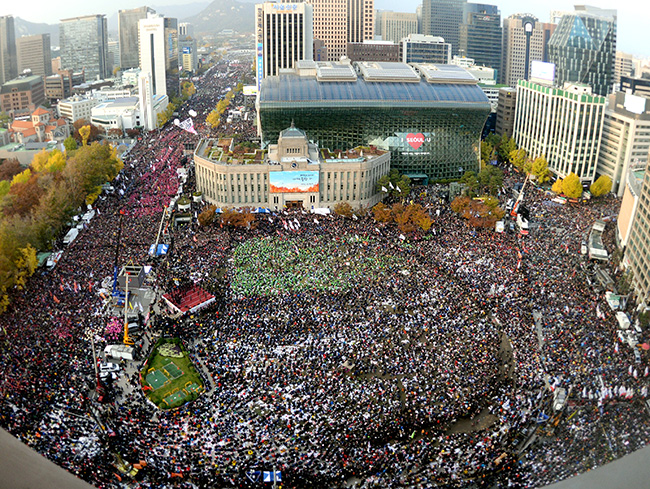 OP Note: I am so proud of my people right now. I was there for about four hours, and it was an experience that took my breath away. Parents explaining to their kids how they are becoming a part of history, students in their school uniforms shouting for justice, a feeling of camaraderie that filled the air. It was truly an amazing moment, and I am so proud to have been part of it. Apparently, someone was at a park behind Cheongwadae (The Blue House/Presidential residence) and they could hear the chants from there, so the president definitely heard us. Also, here's a fun video of everyone doing the wave; I thought it was a cool video showing just how many people were there.

OP NOTE: Since posting this, my enthusiasm for this "movement" has cooled considerably. If I could turn back the clock, I wouldn't post it, but since it's too late for that, I hereby add the following disclaimer: Due to what I've learned from some of the comments to this post, I no longer feel comfortable advocating the safety pin thing, or even doing it myself. Each person reading this should decide what feels right to them and act accordingly.

In the wake of Donald Trump’s election, many groups in the U.S., including African Americans, Muslims and women, are feeling scared and uneasy.

Trump, who has said he would ban all Muslims from entering the U.S., made sexist and insulting comments about women and racist comments about people of color in America, is a frightening prospect for many Americans who believe he is unfit for office.

So while protests rage on across the country, one movement is using a simple yet powerful symbol to show their support for anyone who is fearful of what is to come.( Collapse )

Does this kind of stuff help? I'm damned if I know, but so many people feel so helpless right now that it feels good to do SOMETHING. I'm wearing my #safetypin right now--would post a pic but my phone isn't cooperating at the moment.

Less than a week after his election, Donald Trump has begun to fill out the team he plans to bring with him to the White House. The president-elect announced Sunday that he has selected Republican National Committee Chairman Reince Priebus to serve as chief of staff in his incoming administration.

In the same announcement, Priebus' appointment shared top billing with the news that Trump campaign CEO Stephen K. Bannon will serve as chief strategist and senior counselor to the president.

"I am thrilled to have my very successful team continue with me in leading our country," said Trump said in the emailed statement. "Steve and Reince are highly qualified leaders who worked well together on our campaign and led us to a historic victory. Now I will have them both with me in the White House as we work to make America great again."

The dual selections are likely to send two separate signals to those closely watching Trump's transition into power.