America Was Always Trump, but without the Orange Human Face.

Back in September, many of the protesters at the Standing Rock camp cared little who won the presidential election. "Whoever wins, we're still going to have to live with these fuckers," Chas Jewett told Rolling Stone, gesturing to the Dakota prairie, which would soon go in a landslide for Trump.

Indian country, by contrast, broke hard for Bernie Sanders, and Jewett's sedan, like many of the vehicles parked in the camp, sported Bernie stickers. Many Native Americans at the camp had cast their first primary votes for Sanders, who took a strong position against the 1,172-mile Dakota Access Pipeline, which is intended to move oil from the shale fields of North Dakota to Illinois. Protesters – though they prefer the term "protectors" – fear the consequences of a spill where the pipeline crosses under the Missouri River. There's also a larger political question: The pipeline crosses through territory ceded to the Great Sioux Nation by the 1851 Treaty of Fort Laramie, and the Sioux say they weren't properly consulted for construction on their land.

When Hillary Clinton got the nomination, the protesters had largely lost interest in the election. (Clinton's campaign released a tepid statement in late October reminding both sides to "respect demonstrators' rights to protest peacefully, and workers' rights to do their jobs safely.") Jewett, a Lakota from Cheyenne River and a longtime progressive organizer, had fallen into a deep depression after Sanders lost. She had dealt her entire life with both the casual racism of Dakota ranchers and the paternalism of federal Indian policy, having grown up on a ranch watching white neighbors get easy credit while her father had to go, hat in hand, to the Bureau of Indian Affairs every time he needed a loan for equipment. Things weren't much better now.In 2015, a federal court found that South Dakota's child welfare services department had been taking Native children from their families and tribes and placing them in white homes, in violation of federal law. And there were smaller indignities: Earlier this year, in Rapid City, where Jewett lives, white men threw beer on some Native teens who were on a class trip to a hockey game, demanding they go back to the reservation; local headlines asked if the Native kids had stood for the Pledge of Allegiance at the game. (They had.) "For once," Jewett said of Sanders' run, "we'd had an actual alternative – someone who wasn't just, frack shit, bomb shit." It was September, and no one thought yet that Trump could actually win. But "America deserves Trump," she said, poking the fire with black satisfaction. "America is Trump."
( Collapse )
Standing Rock Protesters React to Life Under Trump

UPDATE: As of Friday morning, the total is now almost $4.86 mil and will no doubt hit $5 mil later today. The goal has also been adjusted upwards to $7 mil. :-D

Jill Stein, the Green party’s presidential candidate, is prepared to request recounts of the election result in several key battleground states, her campaign said on Wednesday.

Stein launched an online fundraising page seeking donations toward a multi-million-dollar fund she said was needed to request reviews of the results in Michigan, Pennsylvania and Wisconsin.

Before midnight EST on Wednesday, the drive had already raised more than the $2m necessary to file for a recount in Wisconsin, where the deadline to challenge is on Friday. The campaign had reached $4m by just before 4pm EST. ( Collapse )

You guise, it looks like this recount thingy is really going to happen! And I, for one, am excited. I think it's worth doing whether it leads to a change the election's outcome or not. And who knows--the margins on all three of these states are so tight (0.7% in Wisconsin, 1.2% in Pennsylvania, and a measly 0.3% in Michigan) that flipping some or all of them to blue is certainly not outside the realm of possibility. (Come on, humor me here, okay--weirder things have already happened in this election, so I just feel like there's no telling what else could transpire before it's all said and done.) ( Collapse )

OP: The Rohingya, an ethnic group in Burma (also often called Myanmar), have been referred to as the most persecuted people on earth (see here, here, and here).

At least 86 people have been killed and 30,000 displaced as violence continues unabated in Myanmar's Rakhine state. 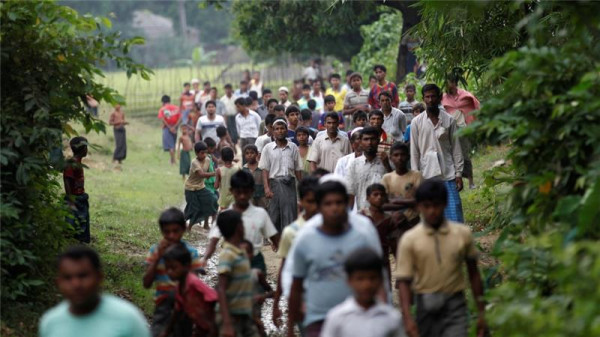