“You Muslims are a vile and filthy people.”

Religious leaders in California are calling for a police investigation after identical letters were sent to local mosques hailing President-elect Donald Trump and calling for death to Muslims.

The San Francisco Bay Area chapter of the Council on American-Islamic Relations (CAIR) released a statement asking for increased protection after the hate-filled letters were discovered at the Islamic centers of Long Beach and Claremont as well as a mosque in San Jose.

The handwritten and photocopied letters, received over the course of the week, were signed by “Americans for a Better Way.” They call Muslims “a vile and filthy people” who “worship the devil” and evoke Trump.

“There’s a new sheriff in town — President Donald Trump. He’s going to cleanse America and make it shine again. And, he’s going to start with you Muslims,” the letters read. “He’s going to do to you Muslims what Hitler did to the Jews.” 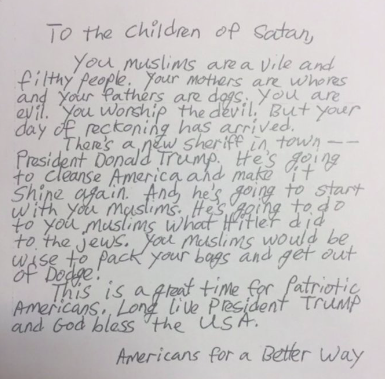 CAIR leaders in San Francisco and Los Angeles didn’t initially want to bring the letters into the public spotlight to avoid copycats, but they acknowledged the need for police intervention once the diatribe was sent to a number of jurisdictions across the state, according to the Los Angeles Times.

“We urge local law enforcement authorities to work with Muslim community leaders to ensure the safety of all houses of worship,” CAIR-SFBA Executive Director Zahra Billoo said in a statement. “Our state’s political and religious leaders need to speak out against the mainstreaming of Islamophobia that we are witnessing in California and nationwide.”

Though Trump has said he isn’t aware of campaigns across the country to intimidate and hurt Muslims since his victory, the problem is rampant.

The Southern Poverty Law Center has tracked more than 700 acts of this kind of bias intimidation and harassment targeting Muslims, blacks, Latinos, immigrants and LGBTQ people since Election Day, though not every incident has been independently verified. The Huffington Post’s Christopher Mathias has identified at least 13 incidents in which Muslims have been attacked, harassed or threatened in Trump’s name.

San Jose police are reportedly investigating the letters. It wasn’t immediately clear whether police departments across the state would ramp up security in response to CAIR’s statement.

CAIR urges Muslim community members to report any incidents to police and to the organization’s civil rights department by calling 202-742-6420 or by filing a report online. 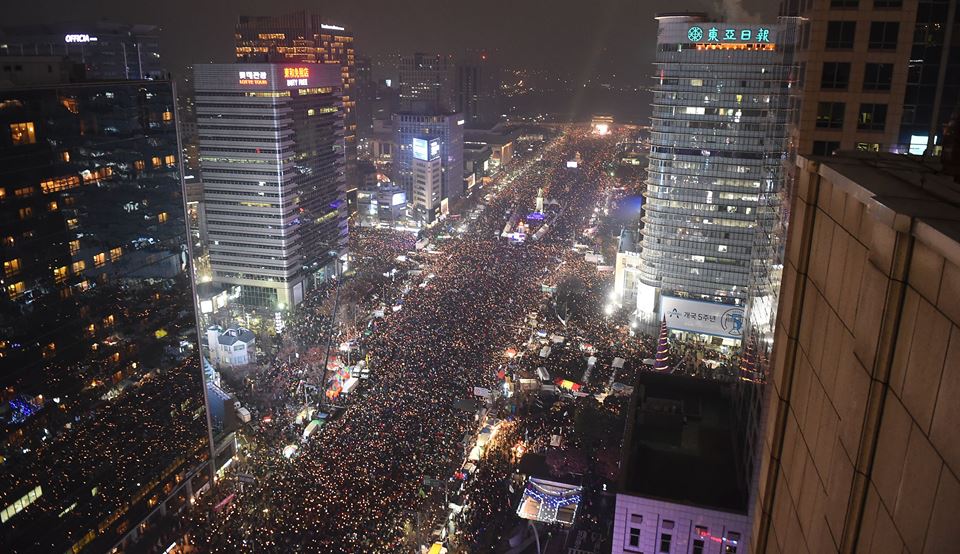 Protest Against South Korean President Estimated to Be Largest Yet

Videos capturing moments from the protest

OP Note: This is a bit of a long read, but definitely worth it if you'd like to understand the process. (It also explains why the president herself is pushing for an impeachment rather than stepping down.)

If the president really cared about this country and its people, she would step down and give herself up for investigation. Instead, she hides away in her ivory tower and passes the blame onto everyone but herself.

Hope everyone had a great weekend, and Thanksgiving if you celebrated!

Temporarily Embarrassed Millionaires Still Waiting for Magical Invisible Hand to Lift them From Poverty. No Dignity in Charity

Author John Paul Brammer has the most brilliant breakdown yet of why poor white people made the difference in getting Donald Trump elected.

Brammer opened up the 24-tweet essay by first identifying as a Mexican-American from a small town in deep-red Oklahoma, establishing his credentials for knowing the rationale behind why working-class white voters went for Trump in droves. He then laid out, tweet-by-tweet, why American culture’s glorification of wealth is idolization of wealthy people is what made the crucial difference in poor people voting for a billionaire president.

In his series of tweets, Brammer explained that as the middle class eroded over the past few decades in the advent of globalization and the steady destabilization of unions, poor white Americans entered a state of denial. The fact that the Trump campaign offered up the scapegoat of immigrants and Syrian refugees allowed impoverished rural Americans the opportunity to externalize their failures onto marginalized groups of people.

Brammer blamed Trump’s success on the so-called “American Dream” of being able to pick oneself up by their own bootstraps and move up the class ladder through hard work and gumption. The fact that Trump directly contributed to the decline of white American rust belt communities through conscious choices like refusing to buy steel for his buildings from American companies, opting instead to buy cheaper Chinese steel, was ignored in favor of the feel-good “American Dream narrative that has permeated American culture.

As Brammer argues, Trump is the physical representation of the American Dream, especially to poor white people who refuse to accept that the system has denied them the means to lift themselves up out of poverty. Even though Trump inherited his wealth from his family and was only able to build a real estate empire with the help of nearly $900 million in tax breaks, rural Americans desperately need to believe that they, too, could be as successful as Trump were it not for obstacles in their way. Brammer pointed out that poor whites in his hometown had myriad excuses to explain away their poverty.