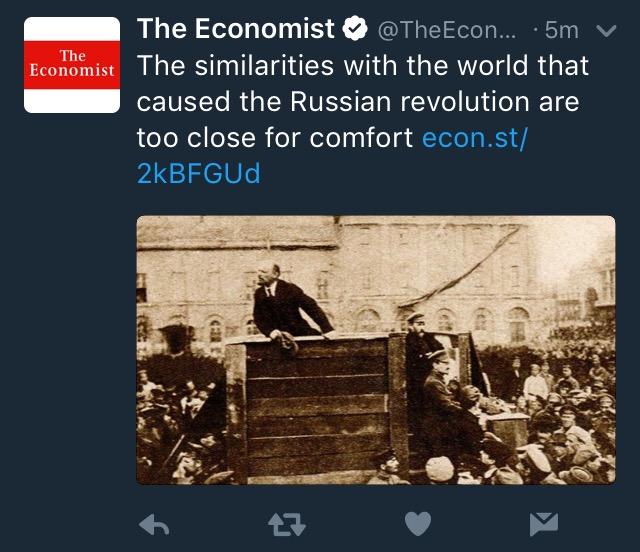 Bolshiness is back
The similarities to the world that produced the Russian revolution are too close for comfort, argues Adrian Wooldridge

This is a period of miserable centenaries. First, in 2014 1914, came that of the outbreak of the first world war, which destroyed the liberal order. Then, in 2016 1916, that of the Battle of the Somme, one of the bloodiest conflicts in military history. In 2017 it will be 100 years since Lenin seized power in Russia. Lenin’s putsch led to a succession of tragedies: Stalin’s rise to power; the death of more than 20m people as a result of the collectivisation of agriculture and forced industrialisation; and, partly in reaction to communism, the rise of Hitler, Mussolini and Franco.
( Collapse )


Our Alternative
We need a socialist politics that challenges the Democratic Party’s leadership, not just the Right.

Among this audience, there is little reason to recite the litany of Trump’s crimes, what his administration means, and how dire the situation is. It’s very, very bad. It’s our duty and mission to defeat the Right and build a majority around a different set of politics.
( Collapse )

It Took Donald Trump 8 Days To Bring The U.S. To The Brink Of A Constitutional Crisis

It took little more than a week in office for President Donald Trump to thrust the nation to the brink of a constitutional crisis.( Collapse )

Source (HuffPost) has video with embed code that doesn't work at LJ (evidently).

Wow, a constitutional crisis less than two weeks into his term? This thing is getting more surreal by the minute. Drumpf's complete and total lack of understanding of the Constitution and the way the US government works is pathetic. (No, Donnie, you are NOT above the law. The potus does not have the autonomy of a CEO or the autocratic powers of a fascist dictator!)

AND, in addition to being just plain wrong, this executive order banning Muslims was handled in such a half-assed way that even before the legal shit hit the fan, there was massive confusion among the people responsible for enforcing it as to exactly who it applied to, etc., leading to massive inconsistencies in how it was being applied at different airports across the country. AND we have the Dept of Homeland Security saying it will obey the court order (“We are and will remain in compliance with judicial orders.”), while Customs and Border Patrol (which is actually part of the Dept. of Homeland Security!) not only refuses to do so but also violates the principle of due process by refusing to let affected people talk to lawyers. AND members of the legislative branch of the government showing up at airports trying to get the executive branch to obey a court order issued by the judicial branch--weird! This situation is fucked up on so many levels that it boggles the mind. I can't even imagine wtf is going to happen next. I just hope Corey Booker, Elizabeth Warren, Dick Durbin, Tammy Duckworth, et al. really mean it about pressing for an investigation and they're not just making a bunch of noise in order to look like they're doing something.

Trump has been trying to govern by impulse, on whim, for personal retribution, for profit, by decree ― as if he had been elected dictator. It doesn’t work, and the wheels are coming off the bus. After a week!

Impeachment is gaining ground because it is the only way to get him out, and because Republicans are already deserting this president in droves, and because the man is psychiatrically incapable of checking whether something is legal before he does it.

Impeachment is gaining ground because it’s so horribly clear that Trump is unfit for office. The grownups around Trump, even the most slavishly loyal ones, spend half their time trying to rein him in, but it can’t be done.

They spend the other half fielding frantic calls from Republican chieftains, business elites and foreign leaders. Trump did what? Poor Reince Priebus has finally attained the pinnacle of power, and it can’t be fun.( Collapse )

Wow. I had no idea how many efforts were already underway to get him impeached. After reading this, I can't help but agree with this author that it's bound to happen.

And before anyone posts "But Pence is just as bad/even worse," well...I get what you're saying, but after seeing how much chaos and havoc little Donnie has already managed to wreak in less than a week and a half, I really don't think the country (or the world) can take 4 whole years of this shit. Pence is evil, all right, but Trump is evil, completely incompetent, AND dangerously mentally unhinged. Also, I'm pretty sure Pence knows that the constitution is a thing, and is probably even familiar with at least some of what's in it, which is a lot more than I can say sayfor Pres. Man Baby.

P.S. This is my first attempt to post (as opposed to just commenting) from my tablet. If there are any formatting errors or link priblems, I apologize in advance and will fix them as soon as I become aware of them.

Most people have experienced the headache of moving. But how exactly does one go about moving something that’s 850,000 pounds, roughly as heavy as 200 Chevy Suburbans?

That’s the predicament the city of Buda found itself in when it realized a 260-year old heritage oak tree stood in the way of its planned site for a new municipal complex at Main and East Loop streets.

After hearing outcry from the community and upon the recommendation of the Historic Preservation Commission, the council decided to spend $232,167 to move the tree elsewhere on the site, about 600 feet away. This week, that moving process is expected to begin.

Tom Cox, CEO and founder of Environmental Design, Inc., the Tomball-based company handling the tree relocation for Buda, explained how it will work.

Inequality's Cycle of Destruction is an Opportunity to Eat the Rich Soon!

700 years of Western inequality, in one chart

We tend to think of rising income inequality as a 21st-century problem. A more equal distribution of wealth is normal, and the growing clout of the 1 percent is an anomaly.
( Collapse )


The Goldman Sachs Effect
How a Bank Conquered Washington

Irony isn’t a concept with which President Donald J. Trump is familiar. In his Inaugural Address, having nominated the wealthiest cabinet in American history, he proclaimed, “For too long, a small group in our nation's capital has reaped the rewards of government while the people have borne the cost. Washington flourished -- but the people did not share in its wealth.”  Under Trump, an even smaller group will flourish -- in particular, a cadre of former Goldman Sachs executives. To put the matter bluntly, two of them (along with the Federal Reserve) are likely to control our economy and financial system in the years to come.
( Collapse )

Donald Trump’s inauguration as the 45th president of the United States is widely seen as the beginning of the end of the post-1945 capitalist order that became globally dominant after the Cold War’s end. But is it possible that Trumpism is actually the end of the beginning? Could Trump’s victory mark the end of a period of post-crisis confusion, when the economic model that failed in 2008 was finally recognized as irretrievably broken, and the start of a new phase of global capitalism, when a new approach to economic management gradually evolves?
( Collapse )
Collapse