On Monday, sans the usual gaggle of reporters and photographers, President Trump signed a revised and somewhat downsized version of his now-infamous refugee and travel ban, commonly called the “Muslim ban.” The changes to the original order are substantial. Iraq is no longer on the list of restricted points of origin, and the administration also makes clear that legal permanent residents and current visa holders are not blocked under the new version. It does bar all refugees from entering the United States for next 120 days, lower the cap for refugee admissions to 50,000 from 110,000, and drop a provision that gave refugee priority to “minority religions in the individual’s country of nationality”—promoted as a carve out for Christians and considered to be one of the least constitutional parts of the measure.( Collapse )

The Specter of Socialism is Haunting the Internet. The Future Will Be Weird-er...

Our Political Economy Is Designed to Create Poverty and Inequality
Poverty is not an abstraction. People wear it on their faces, carry it on their backs as a constant companion—and it is heavy.

Let me begin by sharing with you the story of an inner-city Cleveland family of seven, two adults and five children all under the age of 11.

The family did not own a home. They were renters. As the family grew, it became ever more difficult to find rent. At one point the old car in which they roamed the city in search of rent became their living quarters. Evenings, the father and mother and a newborn slept in the car’s front seat, and the four other children, in the back.
( Collapse )


Throughout history, the best ways to reduce inequality have been disease and destruction

How do you solve a problem like inequality? Economic policymakers have been grappling with this for a long time, with varying degrees of urgency. The search for solutions has become increasingly serious since the 1980s, when inequality began rising again, recently reaching historic highs.

But the problem has been solved before.

After studying thousands of years of human history, Stanford professor Walter Scheidel identified four indisputable ways to reduce inequality: war, revolution, state collapse, and deadly pandemics. These “four horsemen,” as Scheidel dubs them in The Great Leveler: Violence and the History of Inequality from the Stone Age to the Twenty-First Century (Princeton University Press), have proven far more effective at reversing inequality than more peaceful efforts, like improving education, or non-violent shocks, like financial crises.
( Collapse )

Both Obamacare and the recent Republican replacement proposal use refundable tax credits to help people buy their health insurance. That is part of the reason the new G.O.P. bill is under fire from conservatives, who see it as a new entitlement program. 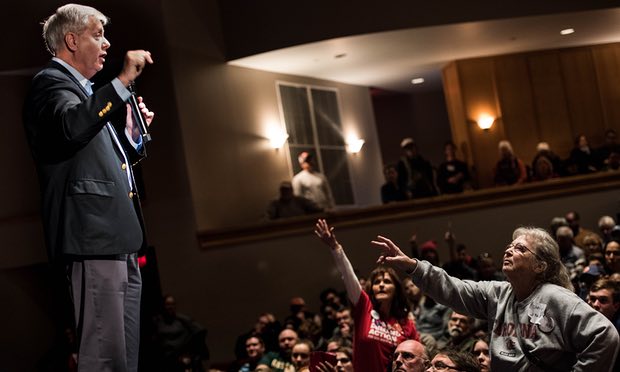 Senator Lindsey Graham told a rowdy town hall in South Carolina on Saturday healthcare was going to change. He just could not say how.

“Can I let you in on a little secret?” the Republican told roughly 1,000 people packed a theatre at Clemson University. “I don’t know what the GOP plan is.”

Many people inside and outside the Republican party do not know where the GOP plan to replace the Affordable Care Act (ACA), often called Obamacare, currently is. Amidst uncertainty over the form of such legislation and its likely political cost, Republican leaders in Congress are reportedly keeping a draft law under lock and key.

This week the Democratic representative Steny Hoyer, of Maryland, led a group of journalists on a hunt for the law, through rooms in and around the US Capitol.

The Kentucky Republican senator Rand Paul, a dissenter to party orthodoxy about how to replace the ACA, also failed to find and see the law.

Donald Trump, meanwhile, drew criticism when he told an audience of healthcare executives at the White House: “Nobody knew that healthcare could be so complicated.”
( Collapse )

Report: Brownback to be named ambassador to the U.N. for food and agriculture

Kansas Gov. Sam Brownback will be named the U.S. ambassador to the United Nations for Food and Agriculture, according to a public radio report.

A possible appointment to the Trump administration for Brownback has been rumored since November, but the governor has been tight-lipped about his prospects. His office would not confirm the accuracy of the report from Kansas Public Radio when asked for comment late Wednesday afternoon.

“Governor Brownback is focused on working with the Kansas legislature to balance the budget and pass a modern school funding system,” said Melika Willoughby, the governor’s spokeswoman.

Pressed on whether she denied the report, Willoughby just kept repeating the comment.

The White House declined to comment on the matter.

Clay Barker, the executive director of the Kansas Republican Party, said that he had no first-hand knowledge of an appointment, but that the report is consistent with things he has heard.

KPR cited an unnamed source who called Brownback’s appointment “a done deal.” If confirmed by the Senate, Brownback would become the leader of the U.S. Mission to the U.N. Agencies in Rome.

Brownback, a former member of the U.S. Senate, served on Trump’s agricultural and Catholic advisory committees during the campaign.

Hillary Clinton’s campaign ran TV ads that had less to do with policy than any other presidential candidate in the past four presidential races, according to a new study published on Monday by the Wesleyan Media Project.

Clinton’s team spent a whopping $1 billion on the election in all — about twice what Donald Trump’s campaign spent. Clinton spent $72 million on television ads in the final weeks alone.

But only 25 percent of advertising supporting her campaign went after Trump on policy grounds, the researchers found. By comparison, every other presidential candidate going back to at least 2000 devoted more than 40 percent of his or her advertising to policy-based attacks. None spent nearly as much time going after an opponent’s personality as Clinton’s ads did.

Trump, who didn’t exactly run as a wonk, aired a more typical number of policy-focused ads compared with past elections. As an example, the study notes his first big TV buy was for an ad called “Two Americas” — one that portrayed life under Clinton’s immigration policies and one under Trump’s. The Clinton world is pretty bleak. Trump’s is rosy. In all, Factcheck.org gave it a so-so review, saying the claims were based on “murky evidence and misrepresentations.”

Beyond overall ad spending, the study also breaks down the content of the attack ads aired on behalf of each candidate. It says about 70 percent of Trump’s ads “contained at least some discussion of policy.” About 90 percent of Clinton’s attack ads went after Trump as an individual — compared with just 10 percent that went after his policies, the study found.

The study concludes that Clinton’s strategy may have backfired badly. Here’s what they have to say:

A quick look at how International Women’s Day is being marked around the world. 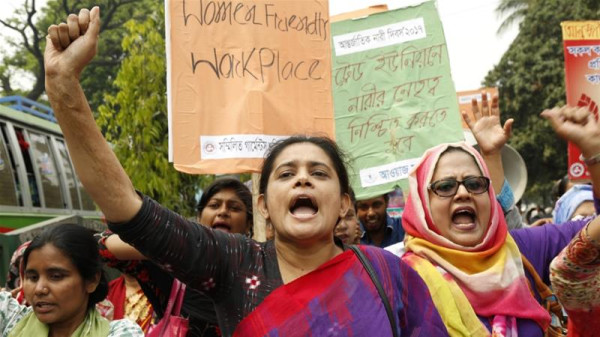 OP: Personally, I think the Canadian 'First Lady' could have tweeted about something really really important to women like the issue of missing and murdered indigenous women and girls in Canada, instead of saying something idiotic.
Collapse