Because for Republican politicians, if you're super rich, you get tax cuts you don't need, even if they have to steal healthcare away from 22 million people. If you're poor, they hope you die. 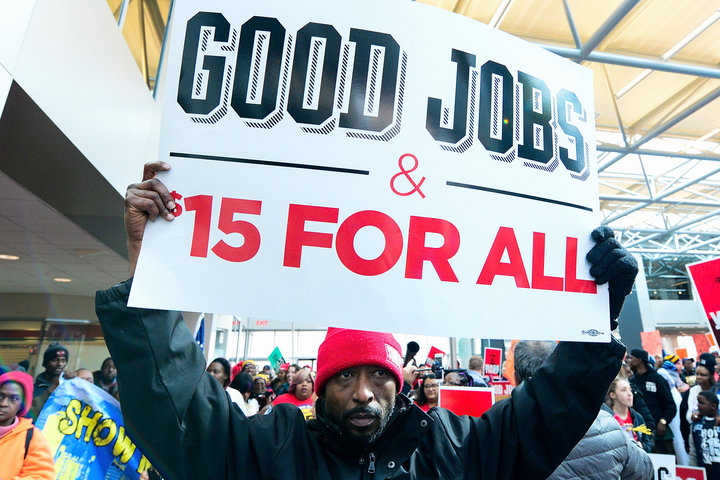 If you thought the minimum wage only moved in one direction, then Missouri Republicans have a surprise for you.

After St. Louis leaders raised the wage floor for workers within city limits, the state GOP recently passed what’s known as a statewide “preemption” law, forbidding localities from taking such matters into their own hands. On Friday, Missouri Gov. Eric Greitens (R) said he would let the law go into effect, thereby barring cities and counties from setting a minimum wage higher than the state level.

For low-wage earners in St. Louis itself, the new law will have a startling consequence: It will actually push the minimum wage back down, from the city-approved $10 per hour to the state-approved $7.70. The downgrade is slated to take effect on Aug. 28.

For someone earning the bare minimum, that’s a potential cut of 23 percent.

It’s impossible to say how many St. Louis employers will take the GOP up on the offer to slash pay, given the effect such a move could have on competitiveness and morale. But if businesses agree with Republicans that the city wage hike is too aggressive, then at least some of them are likely to revert to the lower pay rates, particularly in low-wage industries like fast food.

Greitens wasn’t eager to own the state-sponsored pay cut, opting not to sign the bill. But he doesn’t have to sign it for it to become law. Under the Missouri Constitution, a bill passed by state legislators eventually goes into effect so long as the governor doesn’t veto it.

The governor said the St. Louis minimum wage would “kill jobs.” “And despite what you hear from liberals, it will take money out of people’s pockets,” he added, according to the St. Louis Post-Dispatch.

The Fight for $15 ― the union-backed campaign behind the St. Louis initiative and other wage-boosting efforts around the country ― called Greitens’ passive approval of the law “disgusting.”

If St. Louis’ existing measure were to stay in effect, the city’s minimum wage would be $10 this year and would then climb to $11 in 2018. The statewide rate of $7.70 typically goes up just a few cents a year, since it’s tied to an inflation index.

St. Louis originally passed a minimum wage hike two years ago, prompting business groups to sue to stop it in court. The Missouri Supreme Court recently ruled that the St. Louis measure was lawful, but the new state preemption law renders it irrelevant.

The concept of preemption laws has been around for years, but they’ve become increasingly popular in GOP-controlled states as more cities and counties have tried to raise the minimum wage. Business groups have struggled to blunt local wage legislation and referendums, but they’ve had better luck convincing Republican state legislators to block them from the state capitol.

St. Louis is one of the more glaring case studies, since the wage floor will now sink lower due to a state law. But at least 17 states have preemption laws that stand in the way of local minimum wage legislation, according to a recent study by the National League of Cities.

In Alabama, GOP state legislators passed a preemption law taking aim at the city of Birmingham’s $10.10 minimum wage. The Alabama chapter of the NAACP ended up filing a civil rights lawsuit against the state, claiming that the majority-white legislature was disenfranchising Birmingham residents, who are 73 percent African-American.

The suit was originally dismissed but is now on appeal.

Vagina surgery 'sought by girls as young as nine'

Girls as young as nine are seeking surgery on their genitals because they are distressed by its appearance, the Victoria Derbyshire show has been told.
( Collapse )
OP: Fuck men, fuck the cosmetic industry, fuck pornography and fuck beauty 'standards'. Did I forget anyone?

Also, on the similarities between FGM and labiaplasty see this link, as well as this link and this link.
Collapse