It's what you get when you sneakily form a super-secretive Senate group to work on healthcare in the dark, with 13 men and zero women. Turns out, it was women who decided the fate of their bill anyway. Oh, the irony! 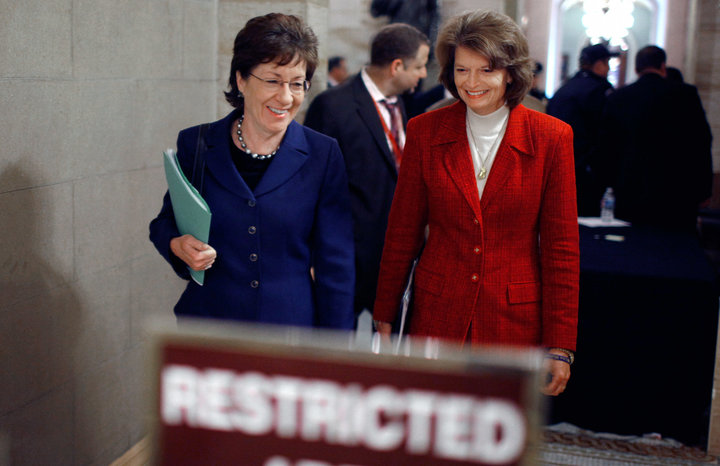 Susan Collins, Lisa Murkowski and Shelley Moore Capito have a few things in common. They are all senators. They are all Republicans. They are all women. And they all near-immediately opposed Mitch McConnell’s plan to repeal the Affordable Care Act with a delayed replacement.

After the GOP Senate health care bill was effectively killed from within on Monday night ― Sens. Jerry Moran and Mike Lee from the conservative wing of the Republican Party dealt the bill its final blow ― McConnell, the Senate majority leader, announced he would move forward with legislation that would effectively repeal the Affordable Care Act without replacing it. The repeal of key parts of the ACA would be delayed until two years after the vote, which McConnell told reporters he wanted to hold in the “very near future.” (The same legislation was vetoed by former President Barack Obama in 2015.)

By Tuesday afternoon, three Republican senators ― Collins, Capito and Murkowski ― became the first to announce that they would oppose a motion to proceed on a repeal of the ACA without a replacement.

Capito released a statement Tuesday morning emphasizing that she “did not come to Washington to hurt people,” pointing to 173,000 people in her state of West Virginia who gained health coverage due to Medicaid expansion under the Affordable Care Act.

“My position on this issue is driven by its impact on West Virginians,” she continued. “With that in mind, I cannot vote to repeal Obamacare without a replacement plan that addresses my concerns and the needs of West Virginians.”

Soon after, Collins, who had publicly opposed the GOP Senate health care bill, and voted against the same repeal legislation in 2015, tweeted that she too would vote no on the motion to proceed.

“I do not think that it’s constructive to repeal a law that is so interwoven within our health care system without having a replacement plan in place,” the Maine senator said, recommending that the Senate Health Committee hold hearings to look at ways to fix the ACA.

I will vote no on the motion to proceed to repeal the Affordable Care Act without a replacement. I voted against this same proposal in 2015. pic.twitter.com/Szuke5zYNL

Following Collins, Murkowski, a senator from Alaska, announced that she would not vote to proceed to repeal the ACA, encouraging the Senate to “take a step back and engage in a bipartisan process to address the failures of the ACA and stabilize the individual markets.”

My recent statement on the Senate Healthcare Process: pic.twitter.com/j19Ok1KwWw

Senate Republicans' Plan B to gut Obamacare is poised for failure, as three GOP senators said Tuesday they will vote against a procedural motion to advance repeal of the health law without a replacement — effectively dooming Senate Majority Leader Mitch McConnell’s latest effort.

McConnell said Tuesday that he would still move to hold a vote soon, which would put senators on the record even if the vote's outcome was preordained.

There are diseases hidden in ice, and they are waking up

Long-dormant bacteria and viruses, trapped in ice and permafrost for centuries, are reviving as Earth's climate warms