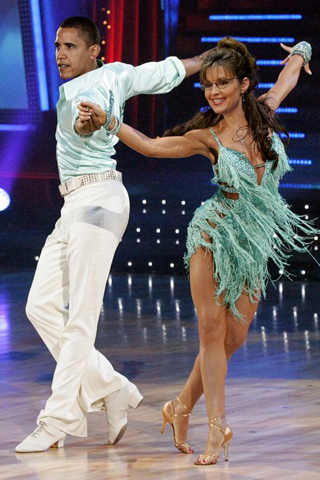 Who doesn’t love a polar bear?

You remember those really cute Coca Cola commercials showing the adorable white puffballs all playing together with dancing penguins.

Sure, in reality they’ll bite your head off. And take great pleasure in doing so.

But … the lovable omnivore appears to be responsible for the first recorded incident of post-partisanship. A decision by the Obama administration yesterday on the adorable puffball led Alaska Governor Sarah Palin to praise her former opponent.

The issue is over whether to protect polar bear habitat by restricting greenhouse gas emissions outside of polar bear habitat. Back in 2008, Interior Secretary Dirk Kempthorne said no, we’re not going to do that, and issued a rule to that effect.

Yesterday, Interior Secretary Ken Salazar also said no and announced that rule would be continued.

“We must do all we can to help the polar bear recover, recognizing that the greatest threat to the polar bear is the melting of Arctic sea ice caused by climate change,” Salazar said in a statement. “However, the Endangered Species Act is not the proper mechanism for controlling our nation’s carbon emissions. Instead, we need a comprehensive energy and climate strategy that curbs climate change and its impacts — including the loss of sea ice. Both President Obama and I are committed to achieving that goal.”

“This is a clear victory for Alaska,” Governor Palin said. “We all want to preserve and protect the polar bear using the best possible tools, but there is absolutely no need to change the … rule to accomplish this purpose. I want to thank Secretary Salazar for his careful review of the science and the administrative record that led to this decision.”

More at the source.