Google got goats [This reminds me of an old Disney cartoon, but I can't remember which!] 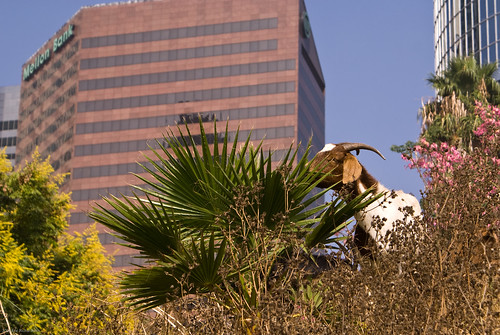 As environmentalism hits the mainstream, gas-guzzling lawnmowers are giving way to -- goats. The latest goat-getter is Google, which decided to rent some goats from California Grazing to mow the fields at its Mountain View headquarters (via Treehugger). Dan Hoffman, director of Real Estate and Workplace Services, explains how the process works on the Official Google Blog:

A herder brings about 200 goats and they spend roughly a week with us at Google, eating the grass and fertilizing at the same time. The goats are herded with the help of Jen, a border collie. It costs us about the same as mowing, and goats are a lot cuter to watch than lawn mowers.
In fact, goats can serve as unusual live entertainment in urban areas. Last September, the Los Angeles Community Redevelopment Agency brought in goats to clean up a steep downtown area -- prompting passersby to stop and watch. "Some wondered whether the goats were part of a movie scene or some kind of performance art, while others made jokes about the approaching lunch hour and goat barbecue," reported the L.A. Times, which also noted that the goats' services were several thousand dollars cheaper -- and a lot more eco-friendly -- than a weed whacking crew.

Mesa, Ariz., also had goats clean up 30 acres earlier this year. In addition to saving money, the goats also just do a better job than polluting machines, according to the City of Mesa's website:

Goats possess a unique characteristic that separates them from almost all other types of livestock; they will eat just about anything resembling a plant. They can clear vegetation from hard-to-reach places, and they'll eat the seeds that pesticides and mowing leave behind, preventing vegetation from coming back next year.

Efficient! Got goats in your neighborhood?

ontd_political, I think? Mods, does this need a cut?