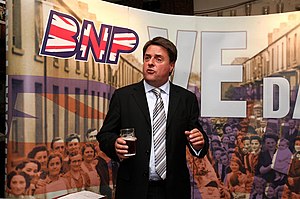 Speculation that the racist BNP is in meltdown appeared to be confirmed this week after its publicity officer was sacked and arrested for allegedly plotting to kill party boss Nick Griffin.

Mark Collett, who was scheduled to stand as a BNP parliamentary candidate in Sheffield Brightside, previously shared the dock with Mr Griffin in 2006 on race hate charges. Both were acquitted.

Mr Collett had been expelled from the party before after being exposed in a 2002 documentary Young, Nazi and Proud in which he praised Hitler and espoused fascist views on hidden camera.

Two years later he was again caught on camera, this time describing asylum-seekers as "cockroaches."

The BNP informed members that the threat had been discovered as a result of an "internal security investigation" into "alleged financial irregularities," the leaking "of sensitive party information" on the internet and "feeding lies to certain anti-BNP blog sites."

The party claimed Mr Collett had been "conspiring with a small clique of other party officials to launch a palace coup" against Mr Griffin.

Mr Collett was asked to attend a police station in Humberside last week on "suspicion of making threats to kill" and, according to a police spokeswoman, was released on bail pending further inquiries.

A spokesman for anti-fascist organisation Searchlight said: "Nick Griffin is constantly claiming he is the leader of a moderate, non-violent organisation.

"It is difficult to see how he can square that assertion with his statement to the police that his own head of publicity has been plotting to kill him."

The BNP has a long history of factionalism and in-fighting. The party itself was formed from a split in the National Front in the 1980s.

In recent days senior BNP members, not including Mr Collett, have left their positions.

I know I posted something similar to this the other day, but it looks like it's more interesting than previously reported... the Mirror said nothing about Collett planning to kill Griffin. :O

ETA for bonus crazy: BNP supporters “have a right to take up arms, arguably in fact a duty to take up arms”, using “physical force” against their enemies -- Griffin (Liberal Conspiracy)