Don’t Be Fooled On May 6th, You Could Be Voting BNP Without Knowing It 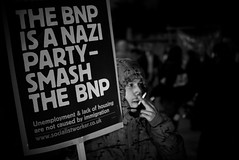 This isn’t something new; other political parties do this as well, but many of them at least leave some obvious indication of the real party behind the name.

I have checked through the Electoral Commission website to provide you the full list of names the BNP ‘Could’ be using on the ballot paper for your area on May 6th, these are the names you need to be aware of:

If you see ANY of the above names listed as the description of a candidate on the ballot paper they ARE British National Party BNP candidates, don’t be fooled into voting for the BNP when you don’t want to.

Source: Vote No The The BNP