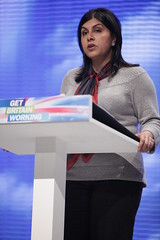 Conservatives say comments by shadow cohesion minister Sayeeda Warsi, made in Urdu, have been misinterpreted

The Conservatives today denied reports that its shadow cabinet member for social cohesion, Lady Warsi, made disparaging comments about Muslim MPs in which she questioned their fitness to stand for parliament.

Warsi, who is Muslim, was quoted on the Next Left website, as saying she did not think there should be more Muslim MPs and peers because they "don't have any morals or principles".

The remarks were reportedly made at a dinner in Yorkshire in honour of the visiting president of Pakistan-controlled Kashmir on 2 April, in response to comments by an earlier speaker who urged more Muslims to enter parliament.

Warsi is reported as saying: "I would actually disagree with that because one of the lessons we have learned in the last five years in politics is that Muslims that go to parliament don't have any morals or principles. Not everyone is [former Labour peer] Lord Ahmed, not everyone puts their community before their own career."

Her final comment was said to have been greeted with applause.

There are reports at Westminster that the Times had compiled a report on the speech, but the story had been dropped. Next Left said it had seen a copy of the unpublished article.

The Conservatives said Warsi's comments were made in Urdu and she had been misinterpreted. A party spokeswoman said: "What she was saying was you shouldn't vote a Muslim MP in thinking that they are going to vote or behave with a Muslim principle. You shouldn't vote them in because they tick boxes."

Warsi said in a statement: "I said that the definition of a good MP is someone that stands up for their constituents and who understands the communities they represent, not necessarily someone that ticks a particular ethnic box. People of every background feel let down by parliament and what is needed are MPs that can represent and empathise with their communities."

The Conservatives have never had a Muslim MP, while Labour had four during the last parliament including two ministers, Sadiq Khan and Shahid Malik.

A Labour insider said that the Tories were "spinning desperately" and insisted that Urdu speakers who had listened to the remarks could confirm the veracity of the translation contained in the Times article.

The Labour candidate Khalid Mahmood, who is hoping to be re-elected to Birmingham Perry Barr, described Warsi's comments as "offensive" to Muslim MPs. "This is a gaffe by her and they [the Conservatives] should recognise that."

He added: "I was very disappointed by her comments. I am going for election for a third term running and I have worked very hard. This bashing of Muslim MPs is just complete nonsense. What she has to do is realise why she hasn't got any Muslim MPs in her party."

Another website, Left Foot Forward, said it had seen the Times article. The website initially reported that the Sheffield Urdu and English newspaper Mahana ILM had confirmed it held a recording of Warsi's comments. But when contacted by the Guardian, Mahana ILM denied any knowledge of Warsi's comment, and the reference to the recording was subsequently removed from the Left Foot Forward story.