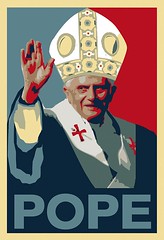 Pope Benedict XVI has insisted that same-sex marriage should not be encouraged among homosexuals as it will likely dampen their natural exuberance and flamboyance leaving them mere husks of their former selves like their heterosexual married brethren.

In an address to a huge crowd at the end of a four day visit to Portugal, the Pope was keen to ensure that homosexuals do not find themselves living the miserable married lives experienced by so many Catholic couples.

“Put a Catholic man alongside a gay man and ask who looks happier, I tell you now it is obvious to all - and it’s not the one who will having sex with just one person for the rest of their lives.”

“Being trapped in a loveless relationship is an insidious and dangerous threat to the common good, and I would much rather the gays were not brought down to our level of lifelong tedium.”

“It might not be my cup of tea, but the gays are clearly a lot happier than any Catholic I’ve ever met, so I would strongly urge you keep on doing whatever, or whomever, you’re doing, and not to worry about this horrendous institution we call marriage.”

The Pope’s speech came at the Catholic shrine of Fatima where the Pope finally seemed to be understanding what everyone else understood a long time ago, that the recent child abuse scandals were the fault of the church.

He told his congregation, “It seems pretty pointless denying it any more, seeing as everyone with access to a newspaper or the Internet knows the truth. So yes, the child sex abuse scandals were caused by sin from within the church. Happy now?”

“Can we now look forward to my trip the UK in peace? I will have many sinners to berate, so it would be better if we could leave our own sins behind by then. Thanks.”