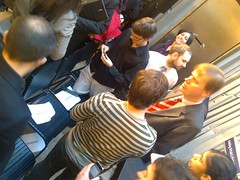 A woman has been charged with the attempted murder of the Labour MP Stephen Timms, who was stabbed during a constituency surgery in east London.

Timms, 54, was holding a surgery for constituents at Beckton Globe Library when he was stabbed.

Choudhary, who is unemployed and from the local area, has also been charged with two counts of possession of an offensive weapon. Two weapons have been recovered.

Timms, a former Treasury minister, was taken to the Royal London hospital in Whitechapel yesterday and was said to be recovering well today following surgery.

A hospital spokeswoman said: "Stephen Timms had surgery yesterday evening at the Royal London hospital to repair his stab wounds.

"The operation went well. He is comfortable and resting on a ward.

"It is anticipated that he will be discharged from hospital in the next few days to recuperate at home."

Police were called to the scene at 3.20pm and a witness at the library described Timms being carried into a room wearing a bloodstained shirt.

The mayor of Newham, Sir Robin Wales, said he understood the MP was stabbed during a pre-arranged meeting with a constituent.

Sir Robin, who has known Timms for more than 20 years, said he thought the MP "was handling it very well" when he spoke to him last night.

Timms has regularly spoken out against knife crime in his constituency, particularly among young people.

He has been MP for the constituency – and previously for Newham North East – since 1994. He held jobs in the Labour administration throughout its 13 years in power, first as a parliamentary aide and as financial secretary to the Treasury and in ministerial posts the departments for social security, education, trade and industry and work and pensions.

He joined the cabinet in 2006 as chief secretary to the Treasury – effectively chancellor Gordon Brown's second-in-command, with responsibility for keeping departmental budgets under control. After Brown became prime minister in 2007, he was dropped from the cabinet and made competitiveness minister in the business department, before moving back to the Department for Work and Pensions and then returning to his old job of financial secretary to the Treasury in 2008.