Pensioner jailed for sex with donkey 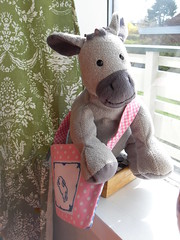 A 66-year-old man was jailed today for having sex with a horse and a donkey.

Joseph Squires was sentenced to a total of 22 months, a Leicester crown court official confirmed today.

He previously pleaded guilty to buggery of a donkey between 2 February and 5 February 1999, and buggery with a horse between 15 and 18 March 2004.

Squires, of Leicester, also admitted charges of damaging property – relating to the two animals on the same dates.