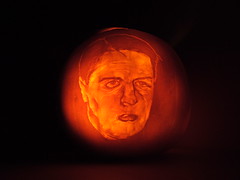 Nick Griffin has revealed that he plans to become a celebrity chef once he has stepped down as leader of the BNP, creating dishes such as Chicken Swastika Masala, Egg Fried Reich and Hot and Spicy Right Wings

His culinary creations have proved a roaring success amongst the British National Party faithful, and the constant pestering for recipes has prompted him to start work on a new cookbook which he plans to call ‘Mein Küche’.


BNP Deputy Simon Darby told reporters, “Word of Nick’s talents in the kitchen has started to spread and he can’t go anywhere without people throwing fresh ingredients right at him in the hope that he’ll knock up one of his tasty recipes.”

“He truly is a grand wizard in the kitchen! Words simply can not describe his delicious Potato Waffens.”

Griffin is hopeful that he can make appearances on light-hearted cookery shows, and made a tentative approach to the BBC when he appeared on Question Time last year, however his suggestion that he should host a show alongside Gregg Wallace and John Torode called Celebrity Master Race was swiftly rejected.

Some of television’s already established chefs have been quick to condemn Griffin’s plans, with Jamie Oliver blasting “Bish, bash bosh! Unpukka Dib, dab, dob, wallop!” before apparently choking on his own tongue.

Despite Oliver’s muffled words ringing in his ears, Griffin is determined to press ahead with his plans and has promised that the first 1000 copies of his book will come with a free How to prepare and cook a goose step by step guide.

The book is scheduled to be released in the Autumn on Totalitarian, Autocratic, Single Party, National Socialist Dictatorship Books.