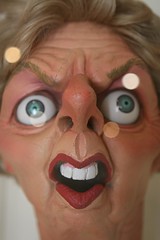 John McDonnell, one of the Labour leadership contenders, joked today that he wished he could go back in time to the 1980s and "assassinate Thatcher".

The MP for Hayes and Harlington, who was Ken Livingstone's deputy at the Greater London council in the early 1980s, insisted later that his comment about Lady Thatcher, the former Conservative prime minister, was made as a "joke and it went down as a joke".

McDonnell, a staunch leftwinger who has earned a reputation as one of the party's leading backbench rebels, made his comment at the Labour leadership hustings organised by the Labour-affiliated GMB union at its annual conference in Southport this afternoon.

He drew loud applause from the delegates when he talked about being on the receiving end of the policies of the former Tory prime minister's government when he worked for the National Union of Mineworkers and then the GLC.

Asked about his career prior to joining parliament, McDonnell said he had once been asked in a warm-up question on the BBC's Any Questions what if he would do if he found himself in an Ashes to Ashes situation – a reference to the BBC series that sees a modern-day policewoman waking up in the 1980s.

McDonnell told the hustings audience that he had said at the time that he would have liked to go back to that era and "assassinate Thatcher".

Asked about his comment, McDonnell later told the Guardian: "It was a joke. And it went down as a joke."

He said he found the hustings "really exciting" and had received "great support" among union members.

"It demonstrated that if you get everybody on the ballot paper it could be really productive and beneficial for the party," he said.

McDonnell is struggling to get his name on the ballot paper with just two days to go to the deadline for nominations. Each candidate needs the support of 33 MPs to stand.

A staunch defender of trade union and employment rights who is popular among the trade union movement, McDonnell has called for the nomination threshold to be lowered to allow a wider range of candidates to enter.

With just 10 Labour MPs formally supporting him so far, he has secured less than a third of the 33 nominations needed.

All six candidates were invited to attend today's hustings, despite the fact that three of the contenders – shadow minister Andy Burnham, leftwing MP Diane Abbott, and McDonnell – have yet to secure enough nominations to formally enter the leadership race.

Shadow ministers David and Ed Miliband were also present at the two-hour debate, in which there was a general recognition of the important role union members will play in the leadership election this summer.

Ed Balls, the shadow education secretary, has passed the threshold but was unable to attend due to a debate on education taking place in the Commons today.

Each candidate spelled out why they believed Labour lost the election, with a common theme emerging that the party had lost touch with its natural supporters.

The "elite" and pro-business policies of the last Labour government came under attack from the candidates.

Burnham said he believed the leadership election was proving that the party was in "good heart", striving to return to government in a stronger position.

He said: "The way we ran our party has been elitist. It was top-heavy. I am the candidate who can bring Labour back together."

Ed Miliband, the shadow climate change secretary, promised to work with unions to try to win back power and fight public sector cuts and said Labour had to prove it could make a difference while in opposition.

"We need to work together on policies again. Our party needs to change its culture. We need to make sure we don't forget the people who put us into power."

The candidates were questioned about why Labour did not give more employment rights to agency workers and even watered down European directives.

Ed Miliband admitted Labour was "too slow" to act on agency workers, agreeing that a directive giving them more rights should have been brought in sooner.

McDonnell argued that Labour had listened too much to the CBI rather than the unions, saying: "We need to reroute the Labour party back into the union movement and start listening again."

Lord Mandelson's role in a future shadow team came under scrutiny after one delegate asked whether the Labour peer ought to be allowed into the shadow cabinet. The former business secretary declined to shadow the post after Labour lost the election due to the difficulty of doing so from the Lords.

Ed Miliband replied: "I think all of us believe in dignity in retirement." He said Mandelson had fought "like a tiger" to get Labour re-elected, but pointedly added that people in the shadow cabinet "should be elected".

Burnham said the party needed to be "refreshed" with a new generation of leaders, adding: "Peter [Mandelson] did some great things. But we created the impression that the elite was running the country. We must have a Labour party that involves everyone."
﻿
Source: The Guardian